The significance of Sarcopenia in longevity medicine

Despite the cause, muscle loss is clinically significant because it erodes strength, endurance, health and vitality. In contrast to LBM loss resulting from individual adverse circumstances, sarcopenia is a condition characterized by muscle atrophy that affects everyone as the result of aging. Surprisingly, muscle loss begins early in life; upon completion of development and as early as twenty or twenty-five years of age. This indicator of aging onset is clearly evident as loss of speed, strength and endurance in middle-aged athletes, which is presumably less than in non-athletes. Clinical studies have shown that the excretion of urinary creatinine, which is a measure of muscle creatine content and total muscle mass, decreases by nearly 50% between the ages of 20 and 70 years. These measurements indicate that degradation of muscle exceeds its synthesis soon after young adulthood is past and suggests that senescence begins much earlier in life than is generally presumed. Thus, interventions in aging focused upon sarcopenia may have great value for increasing duration of life and improving its quality.

A large component of involuntary weight loss during aging occurs in fat-free mass. By age thirty, body weight gain begins to be preferentially accrued as fat instead of muscle and this process that underlies loss of LBM continues unabated thereafter. However, the lost muscle is usually not noticed by affected individuals, because it is replaced in subtle ways such as by padding areas of loss with extra fat. After forty years of age, muscle loss proceeds at a rate of 0.5 - 2% per year or about 8% per decade on average. This rate accelerates noticeably after age 60 and is highest in physically inactive persons along with a parallel decline in dynamic, static, and isokinetic muscle strength. The result of such age-related LBM loss is a decline in function such that up to 65% of older men and women report that they are unable to lift ten pounds with their arms. From age 60 and for each decade thereafter, the rate of muscle loss doubles. 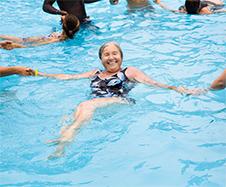 Since reduced skeletal muscle mass during aging is an important and basic cause of morbidity that is significantly and independently associated with functional impairment and disability, the challenge to longevity medical practitioners is to develop effective and practical interventions to prevent or at least partially reverse sarcopenia. Such effort may succeed in identifying beneficial changes in life style, exercise regimens, and novel pharmacological or nutritional therapies to protect us all against this particularly malignant scourge of aging.