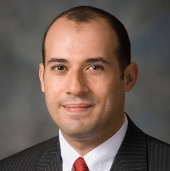 Dr. Ahmed Kaseb is a Professor and Program Director of Hepatocellular Carcinoma (HCC), in the Department of Gastrointestinal Medical Oncology at the University of Texas MD Anderson Cancer Center, Houston, Texas, USA. Dr. Kaseb received his medical degree from Cairo University, and worked as a research fellow at University of Michigan, in Ann Arbor for two years focusing on cancer biomarkers before starting Internal Medicine Residency at Wayne State University, in Detroit, Michigan where he excelled in clinical training and was the recipient of The Best Resident Award in 2003-2004. He then finished Medical oncology fellowship at Henry Ford Hospital, in Detroit, Michigan where he continued his translational research work which led to three major publications presenting circulating biomarkers for early cancer detection in the area of bladder and prostate cancers and his work on HCC biomarkers was subsequently initiated. Dr. Kaseb’s work received international awards from the American Society of Clinical Oncology (ASCO) an American College of Physicians (ACP).

Dr. Kaseb joined the department of Gastrointestinal Medical Oncology, at the University of Texas MD Anderson Cancer Center in 2007 to lead the HCC program. Dr. Kaseb is heavily involved in HCC clinical research where he has served as principal investigator on multiple clinical trials. Dr. Kaseb’s principal research interests include HCC systemic and multi-disciplinary therapies, in addition to molecular staging studies. His research also examines the differential effects of demographics and hepatitis status on treatment outcome in HCC. Based on his interest and research, he has developed several protocols in the treatment and staging of HCC. His published studies have yielded impressive results. Dr. Kaseb’s work has contributed greatly to the understanding of HCC interdisciplinary therapies and molecular staging, and has received governmental and pharmaceutical funding for several projects and clinical trials.

Laura Dawson is a Professor in the Department of Radiation Oncology at the University of Toronto, and a practicing radiation oncologist at the Radiation Medicine Program, Princess Margaret Cancer Centre, in Toronto. She is an internationally recognized leader in hepatocellular carcinoma and in oligo-metastases. Her research has primarily focused on implementation of advanced radiation technologies (e.g. stereotactic body radiation therapy (SBRT), advanced imaging and image guidance) to improve outcomes and to reduce the risk of toxicity in patients with liver cancer. She is the principal investigator of two randomized phase III clinical trials investigating the use of radiation therapy in hepatocellular carcinoma (RTOG1112 and CCTG HE1), and she has led local investigator SBRT combined modality trials hepatocellular carcinoma patients. Dr. Dawson has published over 200 scientific papers and has mentored over 50 students from around the world. She has received numerous awards for her teaching, research and impact in oncology. Dr. Junji Furuse is a Professor in the Department of Medical Oncology, Kyorin University School of Medicine, Japan.

In 1984 Dr. Furuse graduated from Chiba University of Medical School and then joined the First Department of Internal Medicine, Chiba University. In 1992 he moved to the Department of Hepatobiliary and Pancreatic Medical Oncology at the National Cancer Center Hospital East, Chiba, Japan until 2008 when he began his current role.

Dr. Hassan is trained to become a physician with master and Doctor of Philosophy degrees in public health and epidemiology from University of Texas. Since joining The University of Texas M.D. Anderson Cancer center, Dr. Hassan has focused her research on the molecular epidemiology of hepatobiliary cancers in the US, with an emphasis on investigating new risk factors and biomarkers for early detection and cancer prevention. She specifically highlighted the impact of obesity on the risk and clinical outcome of rare cancers including liver cancer, pancreatic cancer, adrenocortical cancer, and neuroendocrine cancer. Dr. Hassan has been involved in several educational activities and served on the advisory committee for many graduate students. She has also been engaged in the reviewing panels of high impact journals and research funding agencies. She earned several awards from the National Cancer Institute where she has collaborated extensively with investigators inside and outside USA in several translational researches yielding many high impact publications in the field of cancer epidemiology. Currently, she is leading a national consortium to study the epidemiology of liver cancers in North America.

Imam Waked is Professor of Medicine in the department of Hepatology, past Chair Hepatology and Dean Emeritus of the National Liver Institute in Egypt. Dr Waked graduated Cairo University School of Medicine, joined the National Liver Institute in 1986, obtained a Doctorate degree from Ain Shams University in Cairo in 1992, and trained in the liver unit of the University of Southern California in Los Angeles. He is a Fellow of the American Association of the Study of Liver Disease (FAASLD), and a Fellow of the Royal College of Physicians (FRCP) in London.
Dr. Waked has more than 100 peer-reviewed publications in international journals. He currently heads the clinical trial unit in the National Liver Institute. His research has focused on hepatitis C and hepatocellular carcinoma epidemiology and treatment. He is a board member of the Egyptian National Committee for Control of Viral Hepatitis which oversees the National Hepatitis C Treatment and Screening Program and is a member of the technical advisory board of the Coalition for Global Hepatitis Elimination. 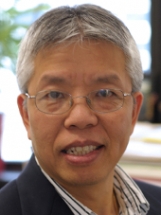 Dr. Wang is a Senior Investigator at the National Cancer Institute (NCI) where he oversees a basic/translational research program emphasizing new molecular approaches to define tumor subtypes and identify biomarkers for early detection, diagnosis, prognosis and prediction, to delineate the molecular mechanisms of liver cancer with applications towards precision medicine. Dr. Wang received his PhD training from New York University School of Medicine and further research training from Roche Institute of Molecular Biology and NCI. Currently, he also serves as Chief of the Liver Carcinogenesis Section and Deputy Chief of the Laboratory of Human Carcinogenesis, Center for Cancer Research at NCI. He is a world renowned liver cancer researcher with a special focus on cancer functional genomics. His lab utilizes state-of-the-art technologies to study liver cancer and other human malignancies. He leads several major international research initiatives on liver cancer genomics and clinical studies through collaborations with multiple universities and cancer centers. He is Honorary Professor of Fudan University and a recipient of several NIH Director’s Awards and NCI Director’s Awards for his outstanding scientific achievement in liver cancer research. He also is a recipient of the NCI Mentor’s Award for excellence in mentoring and guiding the careers of trainees in cancer research and Blue Faery Award for excellence in liver cancer research.

Chia-Jui Weng received his PhD at Department of Food Science and Biotechnology, National Chung Hsing University, Taichung, Taiwan. He was the Lead Guest Editor of BioMed Research International and Guest Editor of Evidence-Based Complementary and Alternative Medicine (eCAM) Journal. He was the organizing Committee member of 6th International Conference on Nutrition and Physical Activity (NAPA2015) and Chair of session in international conferences.