Back to Journals » OncoTargets and Therapy » Volume 12 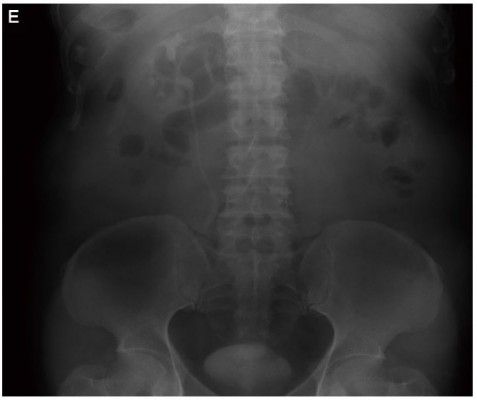 Abstract: Lung cancer is one of the most common causes of cancer-related death. Most of them already have distant metastasis at the time of diagnosis, but ureteral metastasis is extremely rare. Herein, we reported a lung cancer patient with a metastatic lesion from lung cancer at the distal end of the ureter. The patient is a 61-year-old male diagnosed with invasive adenocarcinoma after the right upper lobe resection and system lymph node dissection surgery. After 12 months of surgery, during routine physical examination, lower abdominal enhanced computed tomography showed there was a soft mass with uneven continuous enhancement at the distal end of the ureter. After the surgery of ureter, the mass was histologically considered to be a metastatic lesion arising from the primary lung cancer.

Lung cancer is the leading cause of cancer-related death worldwide. Most patients already have distant metastases when they are diagnosed and the common metastatic sites include brain, bone, liver, and adrenal glands. Ureteral metastasis of non-small-cell lung cancer (NSCLC) is extremely rare. Herein we report a 61-year-old lung cancer patient (male) with ureteral metastasis.

A 61-year-old man with smoking history came to our hospital for the treatment of a solitary pulmonary mass in his right upper lobe found after the routine chest computed tomography (CT) examination during a health checkup. The chest CT examination showed there was a soft mass in the right upper lobe (Figure 1A and B). The patient did not have cough, hemoptysis, dyspnea, chest pain, or other pulmonary symptoms. Tumor markers and physical examination were both negative. The brain enhanced MRI, bone scanning, and enhanced upper abdominal CT examination were all negative for distant metastasis. Then the patient accepted surgery of right upper lobe resection and system lymph node dissection under general anesthesia. Macroscopic examination of the sample revealed a 3.5×3×2.5 cm grayish yellow mass. As shown in Figure 2, the pathology showed that the tumor was diagnosis of adenocarcinoma with acinar predominant type and the pathologic stage was pT2N0M0. The immunohistochemistry staining indicated that the expressions of TTF-1, CK7, Villin, MUC1, and the focal expression of Napsin A and CDX2 were positive, while the expression of SPA, CK20, and MUC2 was negative.

As the pathologic stage of the patient was stage IB, he was reviewed every 6 months without any adjuvant treatment. At about 12 months after surgery, the patient had symptoms of frequent urination, urgency, dysuria, and abdominal pain. As shown in Figure 1C and D, lower abdominal enhanced CT showed there was a soft mass at the distal end of the ureter with uneven continuous enhancement. The ureter and renal pelvis above the mass can be seen ureteral hydronephrosis and expansion of the upper ureter and hydronephrosis. Intravenous urography showed that left pelvis, renal pelvis, and ureter were not developed (Figure 1E). The patient underwent retroperitoneal laparoscopy of the left kidney, left ureter, and open partial excision of the bladder. A 3×3×3.5 cm grayish white mass was found at the distal end of the ureter. As shown in Figure 3, the pathology showed that the tumor was adenocarcinoma. The immunohistochemistry demonstrated the positive expression of CK7, TTF-1, Villin, MUC1, and CDX2. And the tumor cells were negative for CK20, PSA, PAX-8, and P63. Positron emission tomography-computed tomography (PET-CT) scan was negative for other metastases. We got the final diagnosis of solitary ureteral metastasis of adenocarcinoma of the lung after excluding the possibility of other primary tumors and metastases. The examination of circulating tumor cells (CTC) showed that there were 2 CTC cells in total in 3.2 mL of blood, and without CTC cell, clusters were present in the blood, suggesting a potential risk of recurrence and metastasis. Furthermore, the mutations of lung cancer-related driver genes of EGFR, EML4-ALK, HER2, KRAS, BRAF, MET, PIK3CA, ROS1, and RET were detected by next generation sequencing (NGS) using the patient’s peripheral blood. The results of NGS showed that there were not any related genes with mutations. Since there was no driver gene mutation, we used cisplatin based pemetrexed to treat the patient for four cycles. The patient has shown no local recurrence or distal metastasis in 1-year follow-up.

Lung cancer is the most common cause of all cancer-related deaths worldwide.1 Despite the rapid development of chemotherapy, radiotherapy, and targeted therapy, the 5-year survival rate is still <16%.2 Almost 50% of patients with NSCLC were diagnosed with distant metastasis and lost the chance of surgery.3 The most common metastatic sites for NSCLC are brain, liver, lung, bone, and adrenal glands, whereas the metastasis of eyelids,4 gingival,5 prostate,6 and ovaries7 sites is relatively rare. For NSCLC patients with ureteral metastasis, Babaian et al8 found only two patients with metastatic ureteral in 1,281 lung cancer patients in the autopsy data, and Kodama et al9 also reported one case of lung cancer with ureteral metastasis in the literatures’ review.

Systemic chemotherapy and targeted therapy are usually used in patients with advanced NSCLC. However, patients with ureteral tumors usually present with ureteral hydronephrosis and expansion, which generally need surgical intervention. The consistency diagnosis between primary tumors and metastases is based on pathological analysis, and at this time, surgery is not only for resolving clinical manifestations but also for a correct diagnosis.

In conclusion, since ureteral metastases of NSCLC are extremely rare and the conventional preoperative examinations do not include enhanced CT of the lower abdomen, the misdiagnosis or missed diagnosis of ureteral metastasis in lung cancer patients may happen in clinical works. Therefore, if the patient with NSCLC has the symptoms of urinary system, it should be paid more attentions on the possibility of lung cancer patients with urinary system metastasis.

This study was conducted in accordance with the standards of the Declaration of Helsinki for medical research involving human subjects. The patient provided written informed consent for the publication of this report and the accompanying images, and the study protocol was approved by the clinical research ethical review board at Tianjin Medical University General Hospital. Institutional approval was not required to publish this manuscript.

This work was financially supported by grants from the National Natural Science Foundation of China (81773207, 61573251), the Science and Technology Support Key Program of Tianjin (17YFZCSY00840), Tianjin Key Project of Natural Science Foundation (16JCZDJC34200, 16PTSYJC00160), Special Support Program for High Tech Leader & Team of Tianjin, Tianjin Medical University General Hospital Incubation Fund (ZYYFY2017034), and The Fundamental Research Funds for the Central Universities (3332018180). The funders had no role in the study design, data collection and analysis, decision to publish, or preparation of the manuscript.

FR, ML, and JC wrote this manuscript and analyzed all data. XX, HZ, XL, and JL provided medical care for the patients and collected the data. All authors contributed to data analysis, drafting or revising the article, gave final approval of the version to be published, and agree to be accountable for all aspects of the work.