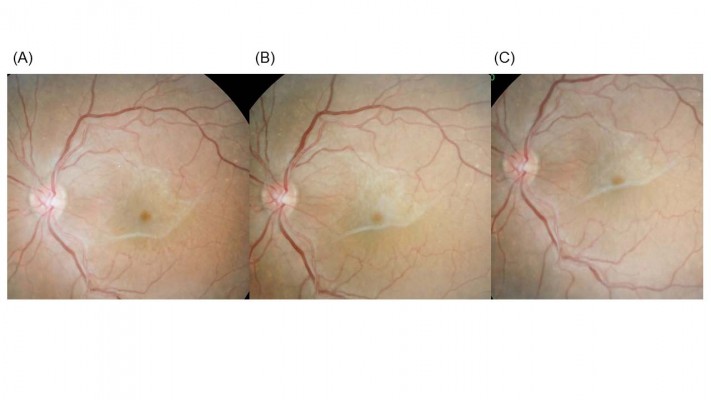 Purpose: To investigate the characteristics in spontaneous release of epiretinal membrane (ERM) during watchful waiting and to introduce a possible mechanism of pathogenesis as a photo essay.
Methods: Records from all patients with ERM were obtained from Osaka Medical College Hospital from January 2001 to October 2012. Visual acuity (VA), fundus photo, and optical coherence tomography (OCT) were reviewed using the medical records. For statistical analysis, VA measured with a Landolt chart was converted to the logarithm of the minimum angle of resolution (logMAR). To investigate the pathogenesis of ERM, tryptase activity in vitreous, which plays a role in tissue fibrosis and remodeling, was measured in patients that underwent a vitrectomy for ERM, macular hole, and proliferative diabetic retinopathy (PDR).
Results: ERM was observed in 604 patients and spontaneous release of the ERM was observed in 13 patients with 14 eyes (four males and nine females, aged 33–78 years). Among the 14 eyes, mean VA did not change significantly through the release of the ERMs (0.17±0.18 before and 0.24±0.40 after release, P=0.544). Nine eyes showed posterior vitreous detachment or vitreomacular traction on OCT images and five eyes did not. ERM was released in five eyes with no accompanying vitreous traction by OCT during watchful waiting and seems to have peeled off by itself by contracting and rolling from the inferior side. Three eyes with deteriorated VA underwent vitrectomy due to macular hole or pseudomacular hole. Vitreal tryptase activity was significantly higher in patients with ERM compared to those with PDR (P<0.05).
Conclusion: Fundus photos of ERM auto-peeling were taken during long-term follow-up. Spontaneous release of ERM is possibly involved in vitreous traction or membrane contraction. In addition, tryptase may be involved in the development and contraction of ERM.

Epiretinal membrane (ERM) is caused by a fibroglial proliferation on the surface of the retina. Patients with vitreomacular traction syndrome are treated with ocriplasmin; however, it usually has little effect on the treatment of ERM.1,2 Whereas, some patients do show auto-peeling and spontaneous release of ERM without posterior vitreous detachment during watchful waiting, which involves the contraction of the ERM (Figures 1 and 2). However, this phenomenon usually takes a long time. Therefore, to investigate the characteristics in spontaneous release of ERM during watchful waiting, visual acuity (VA), fundus photo, and optical coherence tomography (OCT) were reviewed using our medical records obtained from Osaka Medical College Hospital from January 2001 to October 2012. Patient consent to review their medical records was not required by the institutional review board, and patient data were covered confidentially. For statistical analysis, VA measured with a Landolt chart was converted to the logarithm of the minimum angle of resolution (logMAR). ERM was observed in 604 patients and spontaneous release of ERM was observed in 13 patients with 14 eyes (four males and nine females, aged 33–78 years). Among the 14 eyes, mean VA did not change significantly through release of the ERMs (0.17±0.18 before and 0.24±0.40 after release, P=0.544). In five eyes, the released ERM seemed to have peeled off by itself by contracting and rolling from the inferior side without accompanying vitreous traction by OCT during watchful waiting. Three eyes with deteriorated VA underwent vitrectomy due to macular hole or pseudomacular hole.

Although interesting papers have been published regarding the pathohistology of ERMs3,4 and the remodeling of the extracellular matrix at the vitreoretinal interface,2 the pathomechanisms leading to ERM still remains unclear, which raises the following questions:

Based on the recurrent ERM depicted in Figure 3, it is also necessary to think about the presence of internal limiting membrane (ILM). The removal of ILM is the key for ERM recurrence, and ILM peeling in vitrectomy of ERM could result in a significantly lower ERM recurrence rate by preventing reproliferation and ensuring complete removal of ERM fragments.5 In addition, ERM tears and scrolling of tear edges include torn ILM (ILM ripping) histologically,6,7 and the presence of a postoperative ERM edge was recently reported to be associated with a higher risk of ERM recurrence.8

We add an interesting finding that may answer these questions by showing the possible involvement of tryptase in the development of idiopathic ERM (Figure 4). Tryptase activity in the vitreous was significantly higher in patients with ERM (n=14) compared to those with PDR (n=13) (P<0.05). The Ethics Committee of Osaka Medical College, Takatsuki City, Osaka, Japan, approved this study. Tryptase is a serine protease produced in mast cells. Mast cells are located in the eye such as in choroid, ciliary body, conjunctiva, and sclera and play a role in tissue fibrosis, apoptosis, and remodeling. We have previously reported that tryptase activity in the vitreous increased in idiopathic ERM.9 It has also been reported that ERM shows immunoreactivity for collagen types 1 and 2 histopathologically,10 and tryptase stimulates fibroblast-mediated contraction of collagen type 1 gels,11 Thus, the pathogenesis of ERM is possibly related to ERM auto-peeling by contracting the ERM, which results in spontaneous release of ERM. Here, we would like to add the possibility that tryptase affects the development of ERM and contraction of ERM, and mast cells play a key role in the pharmacological treatment of ERM, although further research is needed to determine where tryptase in the vitreous comes from exactly.