Impact of olive oil and honey on healing of diabetic foot: a randomized controlled trial 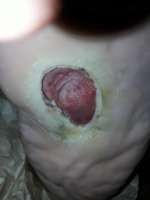 Diabetic foot results from ischemia, neuropathy, and infection. Despite medical and surgical advances in recent decades, problems related to diabetic foot are the most important complications of diabetes. It has also remained a health issue and is considered the greatest risk factor for non-traumatic amputation in the f﻿oot.6 Lack of healing of diabetic foot can result in infection, gangrene, amputation, and even death.7 Diabetic foot heals infrequently and affects lifestyle, social activities, health, and quality of life in patients and their caregivers.8 It can also result in increasing healthcare costs.9 Treatment of diabetic foot includes control of blood sugar, antibiotic therapy, wound debridement, hyperbaric oxygen, negative pressure, electrical stimulation, and using growth hormone.3

Diabetic foot is an important factor in the mortality and disability of people with diabetes. Despite many advances in the diagnosis and treatment of diabetes, the issue of diabetic foot has not been resolved. Many patients suffer from some degree of diabetic foot; consequently, they are treated with medication. After ineffective medical treatment, surgery is considered for patients.10 One of the most challenging tasks in the healthcare of diabetic foot is dressing of these wounds. Various products are used to heal diabetic foot, and their efficiency and effectiveness have been investigated in many studies. Olive oil and honey are two examples of such products.4,11,12

Another study showed that honey has broad-spectrum bactericidal properties, aids in the management of wound infection, enhances the proliferation of ﻿epithelium, and absorbs edema around the wound.9

A systematic review showed that honey dressing may be effective in decreasing the overall treatment time and mean clearance time of wounds, and increasing the bacterial clearance rate and the healed area of wounds.11

This clinical trial was conducted in Yasuj City, Iran. This study was also recorded in the Iran Clinical Trials database (number IRCT 2016082928017N3).

Inclusion criteria for this study were: grade I or II diabetic foot based on the Wagner scale; age 20–70 years; having a wound in the feet (toes, sole, and heel) for more than 1 month; no history of alcohol intake, cigarette smoking, or drug abuse; no history of taking medications that interfere with wound healing, such as immunosuppressants or corticosteroids; and no history of comorbidities that may interfere with wound healing, such as cancer, vasculitis, or failure of the kidney, liver, or heart. Patients with the following features were excluded from the study: a history of allergy to olive oil or honey, having wounds or active infection needing antibiotic therapy, or gangrene needing amputation.

All 45 patients who were referred to hospitals affiliated to Yasuj University of Medical Sciences were selected to take part in the study. The sample size was set to 45 individuals based on calculations and the inclusion of 20% probable dropouts. The sample size was determined based on the formula:

First, a list of patients was provided from the hospitals. Then, the investigator explained the objectives of the study to the potential participants and invited them to take part in the study. After agreeing to participate in the study, the patients provided written informed consent, and this was conducted in accordance with the Declaration of Helsinki. Among 57 available patients, 45 patients who met the inclusion criteria were selected using a non-random sampling method. The samples were based on parallel and random allocation of block randomization. Patients were randomly assigned to the three groups of honey, olive oil, and control. Randomized participant stratification was conducted by one of the nurses working in the clinic who was not involved in any aspects of this study.

This study was conducted under the supervision of the Ethics Committee of Yasuj University of Medical Sciences. An informed consent form was obtained from all participants. Participation in the study was voluntary. Information was kept confidential at all stages, and no patient names were provided at any stage of the study.

Approval was obtained from the Ethics Committee of Yasuj University of Medical Sciences (IR.YUMS.REC.1395,80).

A good level of validity and reliability of the Persian version of the Wagner grading system has been determined in a previous study by Hadadi et al.14

A good level of validity and reliability of the Persian version of this checklist has been determined in a previous study by Nasiri et al.4

Comparison between groups before the intervention

Comparison between groups after the intervention

In terms of the first study question, the results showed that using honey is effective in the treatment of diabetic foot. Several studies have been conducted on diabetic foot; however, there are limitations in these studies that affect the generalizability of the findings. In a descriptive study, Surahio et al examined the impact of honey on diabetic foot in 174 patients. Their results showed that using honey in the treatment of diabetic foot significantly improves the process of wound healing in these patients.15 In another report of a case series, Mohamed et al examined the effect of honey dressing on the healing of diabetic foot, pain, and cost of dressing, and found that honey has a significant impact on improving diabetic foot; consequently, pain and costs of healthcare were decreased considerably.16 The healing properties of honey can be explained by its antimicrobial and anti-inflammatory effects, moisturizing in the wound bed, osmotic effects, decreasing edema in the cells of the wound, accelerating the process of angiogenesis and granulation in the wound, accelerating collagenases and epithelialization in the wound, increasing activities of lymphocytes and phagocytes, and accelerating debridement of necrotic tissue.11,16–18

Regarding the third objective of the study, the results showed that wound healing was the same in patients in the honey and olive oil groups. Indeed, these two substances had similar effects on wound healing. No previous study was found comparing these two substances. However, concurrent use of honey and olive oil has been reported in some case reports. In one study, Khadem Haghighian et al reported a case of healing of diabetic foot using olive oil and honey wax concurrently. The patient was diabetic, with a diabetic wound of 2 cm length × 1 cm width × 1 cm depth. The results showed that using this combination led to complete healing of the wound over 2 weeks.21 In another case study, Zahmatkesh and Rashidi examined the impact of concurrent use of honey and olive oil on healing of a diabetic foot of 2×2 cm area and 2 cm depth in the calf. Treatment included daily dressing with a mixture of heated honey and olive oil. The results showed that granulation tissue was created in the wound after 5 days, and the wound healed completely over 1 month.22

The low sample size is a limitation of our study. Because of the waxy nature of the olive oil and honey, we could not use a placebo in the control group.

Proper and cost-effective treatment of diabetic foot can significantly improve the quality of life in these patients. This is especially important for patients in developing countries because of limited financial resources. The results of this study revealed that honey is as effective as olive oil in the treatment of diabetic foot. Given the few studies on this topic, further investigation is needed. It is also suggested that the effectiveness of the two methods of treatment should be followed up over 6 or 12 months.