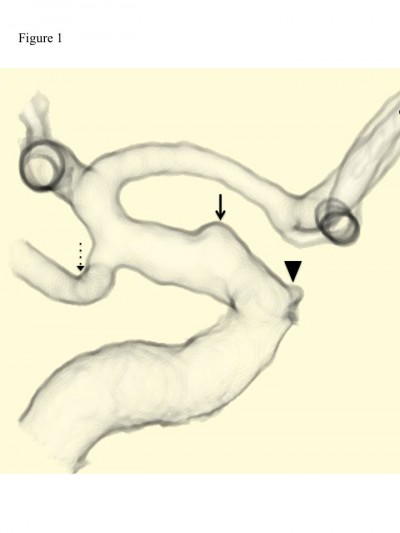 Abstract: Aneurysms at non-branching sites in the supraclinoid internal carotid artery (ICA) can be classified as “blood blister-like aneurysms” (BBAs), which have blood blister-like configurations and fragile walls. While surgical treatment for the BBA in the acute stage is recommended, the optimal surgical procedure remains controversial. In the study reported here, we describe the case of a 37-year-old woman with a ruptured BBA in the ophthalmic segment of the right ICA who underwent wrap-clipping with external carotid artery–internal carotid artery bypass by intraoperative estimation of the measurement of cortical cerebral blood flow (CoBF) using a thermal diffusion flow probe. Trapping of the ICA in the acute stage of subarachnoid hemorrhage may result in ischemic complications secondary to hemodynamic hypoperfusion or occlusion of the perforating artery, and/or delayed vasospasm, even with concomitant bypass surgery. We believe that it is important to perform scheduled external carotid artery–internal carotid artery bypass before trapping of the ICA in patients with a ruptured BBA in the acute stage of subarachnoid hemorrhage and to perform wrap-clipping rather than trapping. This would provide much more CoBF if a reduction of CoBF occurs after trapping occlusion of the ICA including a ruptured BBA according to intraoperative CoBF monitoring. As far as we are aware, the case reported here is the first report on high-flow bypass and wrap-clipping for a ruptured BBA of the ICA using intraoperative monitoring of cerebral hemodynamics.

While surgical treatment for a ruptured blood blister-like aneurysm (BBA) of the supraclinoid internal carotid artery (ICA) in the acute stage is recommended, BBAs tend to rupture intraoperatively, resulting in the formation of a large ICA defect.1,2 Various surgical procedures, such as parallel clipping with or without the cotton-reinforced technique,1,3 suturing and covering the aneurysm with an encircling clip,4 vascular closure staple clips,5 wrap-clipping,6,7 and trapping with external carotid artery–internal carotid artery (EC-IC) bypass,2,8–10 have been used for the management of BBA of the ICA. While the optimal surgical strategy remains controversial, trapping with EC-IC bypass is a useful surgical strategy.2,8–10 If reconstruction of the cerebral circulation with EC-IC bypass is performed, tolerance for ischemia should be carefully determined. Even if a patent EC-IC bypass is reconstructed based on an accurate evaluation of cortical cerebral blood flow (CoBF) demand by preoperative monitoring, such as the balloon occlusion test, ischemic complications can occur secondary to hemodynamic hypoperfusion or occlusion of the perforating artery. In addition, delayed cerebral vasospasm may develop between 4 and 14 days after subarachnoid hemorrhage (SAH). Therefore, it is essential to consider both repair of the ruptured BBA as well as the potential for cerebral ischemia; in that regard, quantification of cerebral blood flow with intraoperative monitoring tools is necessary. Carter and Atkinson11 first described quantitative CoBF measurement by the thermal diffusion method using a cortical thermal sensor. Ogawa et al12 described a significant relationship between intraoperative CoBF and electroencephalographic changes as well as a correlation between postoperative neurological deficits and the degree of residual CoBF during temporary arterial occlusion.

In the present report, we describe a case of a patient with a ruptured BBA in the ophthalmic segment of the ICA who underwent wrap-clipping with EC-IC bypass by intraoperative estimation using measurement of CoBF.

A 37-year-old woman had been an uninterrupted state of good health before she experienced sudden onset of severe headache, vomiting, and deep coma. She was transferred to our hospital, and a computed-tomography (CT) scan revealed diffuse SAH in the basal cistern. Computed-tomography angiography (CTA) demonstrated a BBA in the ophthalmic segment of the right ICA (Figure 1).

One day after the onset of SAH, she recovered from Grade V SAH to Grade IV SAH, according to the Hunt and Hess classification,13 and underwent craniotomy for treatment of the ruptured BBA. The ICA balloon occlusion test was not performed. Measurement of motor evoked potentials could not be performed due to mechanical errors. Under general anesthesia, the cervical common carotid artery, external carotid artery, and ICA were exposed. After a frontotemporal craniotomy with preservation of the superficial temporal artery, the Sylvian fissure was opened widely. She underwent high-flow saphenous vein graft bypass between the right cervical external carotid artery and M2 portion before approaching the ruptured BBA. Any subarachnoid hematoma surrounding the intracranial ICA was carefully removed without dislodging the relatively dense clot on the anterior wall of the artery. During the procedure, the cervical ICA was occluded intermittently to avoid intraoperative bleeding from the lesion. The anterior clinoid process was removed using an ultrasonic surgical aspirator (Sonopet UST-2001, Stryker, Kalamazoo, MI, USA).

An abnormal arterial lesion on the anterior wall of the ICA (as viewed through an operating microscope) was wider than the abnormal hemispheric bulge visualized on preoperative CTA. For CoBF measurements, a calibrated stick-type thermal probe (BTG-III, Biomedical Science, Shinjuku, Japan) was placed on the inferior frontal gyrus of the frontal lobe and superior frontal gyrus of the temporal lobe near the Sylvian fissure within the standard frontotemporal craniotomy,12,14 and the test clip-trapping between just distal to the origin of the ophthalmic artery and just proximal to the origin of the posterior communicating artery, including the ruptured BBA, was performed with simultaneous and continuous measurement of the CoBF.

First, the CoBF during clip-trapping of the ICA under functioning high-flow bypass was measured, and the ratio of the value to the CoBF immediately before test clip-trapping of the ICA was calculated in the frontal and temporal lobes. Prior to the beginning of the present study, the CoBF was measured immediately after dural incision for 5 minutes in ten patients undergoing neck clipping for an un-ruptured cerebral aneurysm. The ratio of the lowest value to the highest value in the period ranged from 0.92 to 0.99 (mean ± standard deviation [SD]; 0.96±0.03).14 Thus, in the present study, any value less than 1.0–3.0 SD (0.9) was defined as a significant reduction of the CoBF ratio. In the present case, the CoBF decreased immediately after test clip-trapping of the ICA in the frontal lobe and the temporal lobe and returned to pre-clip-trapping levels immediately after de-clamping of the ICA. CoBF ratios were 0.56 and 0.70 in the right frontal lobe (Figure 2) and temporal lobe, respectively. Consequently, the patient underwent wrap-clipping with EC-IC bypass to provide greater blood flow.

The diameter of the abnormal arterial lesion along the long axis of the ICA and the distance between the origin of the ophthalmic artery and the origin of the posterior communicating artery were measured, and a strip of 0.1 mm thick polytetrafluoroethylene (PTFE) membrane (Gore-Tex®; WL Gore and Associates, Flagstaff, AZ, USA), which is often used as a dural substitute, was trimmed with scissors to match the diameter and distance. After temporarily occluding the cervical ICA, the intracranial ICA that included the lesion was carefully wrapped with the strip of PTFE, and one clip was applied parallel to the vessel, so that the clip blade gripped the arterial wall beyond the lesion. These procedures were successfully accomplished without intraoperative bleeding.

Right carotid angiography performed 7 days after surgery demonstrated resolution of the BBA and no stenosis in the affected intracranial ICA; however, moderate narrowing of the proximal segment was present in the middle cerebral artery (MCA). The ipsilateral MCA area supplied the patent high-flow bypass during the arterial early phase of angiography (Figure 3A and B). During the arterial late phase, anterograde filling via the ICA was shown (Figure 3B).

The patient had an uneventful postoperative course, and new ischemic brain lesions were not demonstrated in postoperative magnetic resonance images. Follow-up right carotid angiography performed 1 year after the surgery revealed resolution of the BBA and no stenosis. Further, the ipsilateral MCA area was supplied by anterograde filling via the ICA during the arterial early phase of angiography (Figure 4A). During the arterial late phase, retrograde filling via the patent high-flow bypass was shown (Figure 4B).

In the case described here, the patient with a ruptured BBA of the ICA underwent wrap-clipping with high-flow bypass. Our previous report suggested that wrap-clipping of BBA using PTFE resulted in favorable patient outcomes.7 Wrap-clipping may be advantageous in terms of preserving anterograde flow when it is safely and completely applicable and may be suitable for BBAs that are located far from the anterior clinoid process that project anteriorly or anteromedially and are located at the communicating segment of the ICA. On the other hand, forced trapping after intraoperative bleeding when approaching BBA is associated with high morbidity and mortality.15 In our current surgical strategy for a ruptured BBA, at the ophthalmic or communicating segment of the ICA in the vicinity of the anterior clinoid process, it is recommended to perform bypass surgery before approaching the BBA.

Results of scheduled trapping after EC-IC bypass strategy have been relatively good;2 however, cerebral ischemia due to hemodynamic hypoperfusion may develop. Furthermore, ischemic complications may occur immediately after surgery due to occlusion of the perforating artery.8 Some perforating arteries might be directly sacrificed by parent artery occlusion, such as clip-trapping, and postoperative perforator infarction has been observed in cases of paraclinoid aneurysms but not in cases of intracavernous aneurysms.8 Perforating arteries might be occluded by thrombotic or embolic mechanisms due to acute and excessive thrombosis in the lumen of the occluded parent artery.8 In addition, delayed angiographic vasospasm has been observed in more than 90% of patients after SAH, regardless of whether or not it was symptomatic.16

One possible concern is that trapping occlusion of the ICA in the acute stage of SAH may provoke ischemic complications due to hemodynamic hypoperfusion or occlusion of the perforating artery, delayed vasospasm, and/or early global cerebral hypoperfusion, even with concomitant bypass surgery. We believe that it is important to perform scheduled EC-IC bypass before trapping of the ICA in patients with a ruptured BBA in the acute stage of SAH and to utilize wrap-clipping rather than trapping. What is novel in the management of our case is that this surgical strategy will provide much more CoBF if reduction of CoBF develops after trapping occlusion of the ICA, including a ruptured BBA, when conducting intraoperative CoBF monitoring, and may prevent ischemic complications. Several groups of investigators have used endovascular treatment as primary treatment;18,19 however, clinical and angiographic results have been unsatisfactory. Recently, the application of flow diverters, such as the pipeline embolization device, for the treatment of complex aneurysms has been reported,20 and long-term clinical and angiographic surveillance is recommended.

This work was supported by a grant from Japan Society for the Promotion of Science Kakenhi (grant no 23592103).

The authors report no conflict of interest in this work.