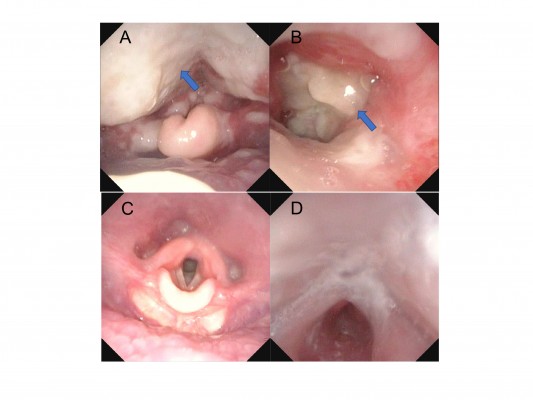 Abstract: Haemophilus influenzae was the main causative organism for acute epiglottitis in the pre-Haemophilus influenzae type b (Hib) vaccine era. However, with current widespread Hib vaccination, the causative organisms may have changed. Here, we report the case of a healthy infant with acute epiglottitis caused by community-acquired methicillin-resistant Staphylococcus aureus (MRSA). The patient was a healthy 17-day-old male infant without a family history of immunodeficiency syndrome. He had not been started on any vaccines. On the third day of illness, he was diagnosed with acute pharyngitis with exudation on the back of the larynx. Although treatment using cefotaxime was initiated, he showed stridor, difficulty in pronunciation, and cyanosis upon crying on the fourth day. On the fifth day, he was diagnosed with acute epiglottitis by laryngoscopy, which showed a downward spread of the exudation and laryngeal edema. He was intubated and started on artificial respiration. Due to the detection of MRSA from a pharyngeal swab culture, he was treated with vancomycin. His fever disappeared on the first day after admission, and he was extubated on the eighth day after admission. MRSA genome analysis of the patient sample revealed negative Panton–Valentine leukocidin, positive toxic shock syndrome toxin 1, and type IV clone of staphylococcal cassette chromosome mec. This is a first case of acute epiglottitis caused by MRSA with a Panton–Valentine leukocidin-negative and toxic shock syndrome toxin 1-positive staphylococcal cassette chromosome mec type IV clone, which is known as a community-acquired MRSA in Japan. Community-acquired MRSA may be considered a causative organism for acute epiglottitis in the post-Hib vaccine era.

Acute epiglottitis is a common disease in children aged 1–11 years and initially presents with symptoms such as fever and sore throat, followed by difficulty in swallowing and laborious breathing and stridor as the disease progresses.1,2 Because this fatal disease causes sudden airway obstruction due to laryngeal edema, emergency treatment is often required in the pediatric intensive care unit.

In the pre-Haemophilus influenzae type B (Hib) vaccine era, 75%–90% of the cases of acute epiglottitis were caused by H. influenzae.2 However, in the post-Hib vaccine era, the causative organisms have changed, and the proportion of acute epiglottitis cases caused by Streptococcus pneumoniae and Staphylococcus aureus is increasing in some countries.3,4 In Japan, the Hib vaccine was introduced as a voluntary vaccination in 2008 and as an universal vaccination in 2013. With generalization of Hib vaccination in Japan, the number of patients affected by Hib has decreased dramatically5 and the incidence of epiglottitis due to Hib also should have decreased. Thereafter, Str. pneumoniae or Sta. aureus may have emerged as the main causative organism of acute epiglottitis in Japan. Here, we report the case of an infant with acute epiglottitis caused by Japanese community-associated (CA)–methicillin-resistant Sta. aureus (MRSA) with written informed consent for publication from the parents of the patient. Ethics committee approved the waiver in this case report, based on the Japanese ethical guideline for clinical research.

A healthy 17-day-old male infant without a family history of immunodeficiency syndrome was consulted by his family physician for cough, nasal discharge, and a fever on the third day of illness. He had not started any vaccines because of his age (<1 month). He was diagnosed with acute pharyngitis along with exudation on the back of the larynx. Although cefotaxime treatment was initiated, wheezing, difficulty in vocalizing, and cyanosis on crying were observed on the fourth day. On the fifth day, laryngoscopy revealed a downward spread of exudation and laryngeal edema, which led to diagnosis of acute epiglottitis (Figure 1A, B). Because airway management was required, he was referred to our pediatric intensive care unit and immediately started on artificial respiration.

At the time of admission, the patient’s laboratory tests showed the following: white blood cell count 4,700/μL (band cell: 35%, segmented cell: 31%, eosinophil: 5%, monocyte: 8%, lymphocyte: 18%, atypical lymphocyte: 3%), hemoglobin level 11.1 g/dL, platelet count 24.4×104/μL, and C-reactive protein level 6.65 mg/dL. Other laboratory findings were as follows: serum albumin 2.4 g/dL, total bilirubin 0.48 mg/dL, sodium 137 mEq/L, potassium 3.3 mEq/L, aspartate aminotransferase 14 U/L, alanine aminotransferase 8 U/L, lactate dehydrogenase 260 IU/L, urea nitrogen 3.9 mg/dL, and creatinine 0.19 mg/dL. His IgG, IgA, IgM, C3, C4, and CH50 levels were within the normal ranges (IgG: 686 mg/dL, IgA: 19 mg/dL, IgM: 52 mg/dL, C3: 84 mg/dL, C4: 15 mg/dL, and CH50: 32.5 U/L). His arterial blood gas under 1.0 of the fraction of inspired oxygen showed a pH of 7.428, pCO2 of 42 mmHg, pO2 of 114.0 mmHg, HCO3− of 27.2 mmol/L, and base excess of 3.1 mmol/L. Rapid antigen test for respiratory syncytial and adenoviruses was negative (Capilia™ RSV Neo and Adeno; TAUNS Laboratories, Inc., Shizuoka, Japan). MRSA was detected from the posterior nasal cavity swab culture and the pharyngeal swab culture at the site attached to the exudate, but skin swab culture and blood culture were negative. Owing to the detection of MRSA, he was treated with vancomycin. The fever disappeared on the first day of admission, and he was extubated on the eighth day of admission. Figure 1C, D shows his laryngoscopic images after extubation. Finally, the patient was discharged on the 18th day of admission.

Identification of MRSA and genome analysis

Gram staining and culture using blood and chocolate agar were performed to identify the organisms using swabs obtained from the posterior nasal cavity or pharynx of the patient. Because Sta. aureus was detected, the culture using MRSA screen media (CHROMagar™; Kanto Chemical Co., Inc., Tokyo, Japan) was performed to identify MRSA. Determination of the minimum inhibitory concentration of each antibiotic for the isolated strain was performed using a RAISUS™ system with the RSMSE panel (Nissui Pharmaceutical Co., Ltd, Tokyo, Japan). The inoculum was adjusted to yield a cell density of 1×105 colony-forming units/mL. The plates were incubated for 18–24 hours at 35°C and then analyzed automatically. Result of the antimicrobial susceptibility test for the isolated strain is shown in Table 1.

Streptococcus pyogenes, Epstein–Barr virus, and adenovirus are well-known causes of upper respiratory tract infection with exudate. In the current case, the presence of exudate around the epiglottis from the posterior pharyngeal wall was a characteristic feature of acute epiglottitis. Our PubMed search revealed four cases of acute epiglottis caused by MRSA, of which two cases showed the presence of exudates.19,22 Sta. aureus including MRSA is not the main organism causing upper respiratory tract infection with exudates; however, it is a possible causative organism.

To the best of our knowledge, this is a first case of acute epiglottitis caused by MRSA with a PVL-negative and TSST-1–positive SCCmec type IV clone, which is a CA-MRSA in Japan. CA-MRSA should be considered a causative organism for acute epiglottitis in the post-Hib vaccine era. Further observations with a large patient population are needed to confirm a causative organism in the post-Hib vaccine era in Japan.

We obtained written informed consent including data and images for publication from the guardian of the patient.

The data used in this report are available from the corresponding author on reasonable request.

This research is partially supported by the Japan Agency for Medical Research and Development (grant number: 18fk0108047h0002) and the Kawano Masanori Memorial Foundation for Promotion of Pediatrics.