Wasp sting of the cornea 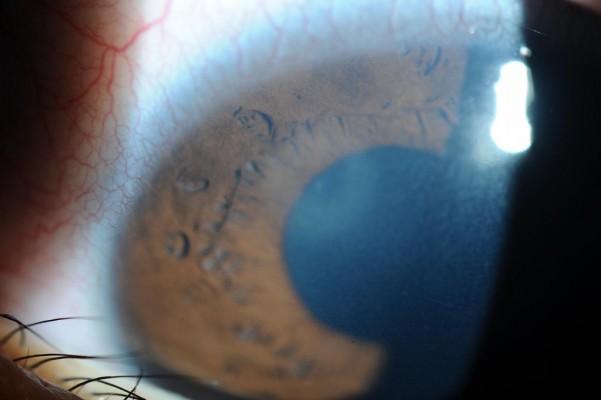 Purpose: Many treatments, such as conservative management or penetrating keratoplasty, exist for corneal wasp sting. Here, we report a case of paper wasp sting of the cornea treated by anterior chamber wash immediately following admission, which soon resolved the inflammation.
Case: A healthy 9-year-old boy who had been stung by a paper wasp on his left eye 2 days prior to presentation at Dokkyo Medical University Saitama Medical Center was found to have corneal opacity accompanied by ciliary injection. The boy had difficulty opening his left eye due to pain. His left corneal endothelial cell density was 2,789 cells/mm2, which was relatively lesser than that in the right eye. We diagnosed a paper wasp sting of the cornea based on both the patient’s clinical findings and sting history. The anterior chamber was promptly irrigated using a balanced salt solution; the inflammation resolved in a few hours, and the patient could open his left eye easily the following day. One day after the operation, the visual acuity improved to 1.2, and only slight corneal opacity remained at the original wasp sting site.
Conclusion: The positive outcome of the current case suggested that anterior chamber irrigation leads to rapid resolution of the inflammation.

Wasps belong to the order Hymenoptera.1 They tend to target black-colored subjects in general, and therefore black hair and eyes of human beings are their easy targets. Corneal wasp stings occasionally cause corneal erosion, endothelium damage, cataract, and glaucoma. At such instances, surgery may be indicated.2

We report a case of paper wasp sting of the left cornea treated with anterior chamber irrigation, which soon resolved the inflammation.

A 9-year-old boy presented with a 4-day history of left eye pain and decreased vision due to a paper wasp sting to his left eye. The patient was attacked by a paper wasp while outside on an elementary school playground, because he went near the nest. The patient was prescribed topical levofloxacin 1.5%, fluorometholone 0.1%, and sodium hyaluronate 0.1% at a previous eye clinic. This treatment provided little relief, and the boy developed a corneal infiltrate with surrounding edema. Corneal edema occurred only in the area of the sting. A bee sting could not be found on the cornea. The anterior chamber showed mild flares and cells.

On clinical examination, his best-corrected visual acuity (BCVA) was 1.2 in the right eye, which was within normal limits, and 0.8 in the left eye. The left eye showed a paracentral corneal infiltrate with surrounding edema (Figure 1). The lens was clear, and posterior segment examination was unremarkable. The intraocular pressure was 12 mmHg in the left eye, and corneal endothelial cell densities (CECDs) were 3,083 cells/mm2 in the right eye and 2,789 cells/mm2 in the left eye (Figure 2). It was difficult for the patient to open his left eye.

Twelve months later, the patient’s BCVA was still 1.2, and slight corneal opacity remained at the original paper wasp sting site (Figure 3). CECD in the left eye, at 2,798 cells/mm2, was also comparatively lesser than in the right (Figure 4).

Although CECD before the wasp sting was unknown, the stung eye showed an approximately 10% lower CECD than that of the unaffected right eye. Irrigation of the anterior chamber may influence this CECD reduction. Furthermore, our patient does not indicate a history of other eye trauma or uveitis; therefore, the wasp venom is the most probable cause of the CECD reduction. Wasp venom is composed of various peptides and proteins such as melittin, phospholipase A2, apamin, and mast cell degranulating peptide.8,9 The mechanism of CECD reduction by wasp sting remains unclear. We previously reported a case with CECD reduction around a wasp sting wound that was present even 6 months after the incident.10 Briefly, we divided the cornea into four portions (superior, inferior, right, and left) and measured CECDs of each portion. We found that the CECDs differed across the portions (superior: 2,525 cells/mm2, inferior: 853 cells/mm2, right: 2,506 cells/mm2, and left: 2,257 cells/mm2).10 In the present case, we could measure CECD in the center of the cornea only because of limitations of our measurement tools. However, even in the present case, CECDs may have differed if measured across different portions of the cornea. Amann et al11 reported that the human cornea has an increased endothelial cell density in the paracentral and peripheral regions of cornea compared with the central region. The superior peripheral region of the corneal endothelium reveals the largest increase in the endothelial cell density.11

To the best of our knowledge, there are no reports on wasp stings of the cornea when wearing eyeglasses. Our patient was stung in the cornea while playing hide-and-seek in the school ground. Use of protective eyeglasses may reduce the danger of such stings. Appropriate eye protectors have been found to reduce the risk of significant eye injury at least 90% when properly fitted.12 Furthermore, the effectiveness of protective eyeglasses for dental surgeons has already been verified during daily dental works.13

Anterior chamber irrigation effectively resolved the inflammation due to the paper wasp sting of the cornea. Therefore, we propose that this method should be considered as the first choice of treatment.

Written informed consent was obtained from the patient’s mother for publication of this case report and any accompanying images.