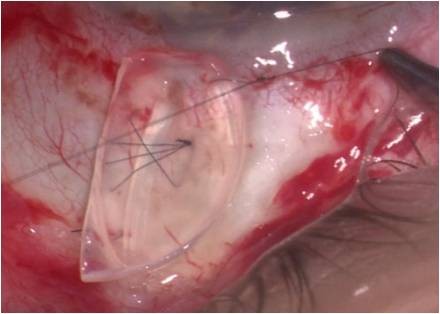 Purpose: To investigate the clinical outcomes of tube shunt coverage using sterile gamma-irradiated cornea allograft.
Patients and methods: The Wills Eye Hospital Glaucoma Research Center retrospectively reviewed the medical records of 165 patients who underwent glaucoma tube shunt procedures using sterile gamma-irradiated cornea allograft (VisionGraft) between December 2012 and November 2013. Demographic characteristics, type of tube shunt, and position were noted. Complications were recorded at 1 day; 1 week; 1, 3, 6, and 12 months; and on the final postoperative visit.
Results: One hundred and sixty-nine eyes of 165 patients were included. The mean follow-up time was 4.8±3.5 (ranging from 1 to 16) months. There was no evidence of immunological reaction, infection, or exposure in 166 eyes (98.2%). Three eyes (1.8%) experienced graft or tube exposure within the first 3 postoperative months. Two of the cases had underlying diseases: bullous pemphigoid and chronic allergic conjunctivitis.
Conclusion: Coverage of tube shunts using gamma-irradiated cornea allograft had a low exposure rate and was well tolerated. The graft can be stored long term at room temperature and has an excellent postoperative cosmetic appearance.

Tube shunts have been widely used in the treatment of eyes with complicated glaucoma.1 Although tube shunts were introduced primarily for refractory cases, recently they are increasingly used as a primary surgical procedure.2

Tube shunt surgery is associated with complications including tube or plate exposure, tube migration, and infection.3 Tube-related exposure, which is a significant risk factor for the development of postoperative endophthalmitis, requires prompt surgical intervention.4 Numerous materials including pericardium,5 human sclera,6 dura,7 fascia lata,8 porcine intestinal submucosa,9 and amniotic membrane10 have been used to decrease the exposure rates of tube shunt surgeries. Each material has its own advantages and disadvantages regarding success rates, storage conditions, availability, patient comfort, and cosmetic appearance.

Recently, several types of processed donor cornea tissue have been used in primary coverage of tube shunts, repair of exposed implant, and repair of filtering bleb leaks.11–14 Gamma irradiation is an effective method for the sterilization of donor tissues. By avoiding the risk of bacterial, fungal, and virus transmission it offers more safety when compared to fresh corneas.15 In recent pilot studies, gamma-irradiated sterile cornea allograft has been reported effective and safe as a coverage material for glaucoma tube shunt surgery in a limited number of patients.16,17

In this study, we report our outcomes of using gamma-irradiated cornea allograft as a coverage material for glaucoma tube shunt surgeries. To the best of our knowledge, this current study is the largest study to date reporting the outcomes of tube shunt coverage using this patch graft.

After the approval by the Institutional Review Board at the Wills Eye Hospital, a retrospective chart review was performed. All research methods were in compliance with the Declaration of Helsinki.

A total of 185 eyes underwent a primary or secondary tube shunt surgery using sterile gamma-irradiated cornea allograft (VisionGraft, Tissue Banks International Inc., Baltimore, MD, USA) between December 2012 and November 2013. Charts were included from 169 eyes of 165 patients who had complete information and follow-up data for at least 1 month. Preoperative data collected included age, sex, race, and type of glaucoma. Intraoperative data collected included type of tube, tube position, and type of surgery. Complications were recorded at 1 day; 1 week; 1, 3, 6, and 12 months; and final postoperative visit. Primary outcome was the ability of the allograft to remain stable and biocompatible postoperatively. Stability and biocompatibility were measured clinically by the integrity of the overlying conjunctiva and the allograft itself, signs of inflammation, and the need for surgical revision.

Sterile gamma-irradiated cornea allograft is obtained from a medically qualified donor. This procedure is committed to tissue safety and maintains compliance with appropriate and required regulatory agencies including the Eye Bank Association of America, the American Association of Tissue Banks, and the US Food and Drug Administration.18 The allografts are sterilized using gamma radiation. The allograft is stored at room temperature for up to 18 months in a box containing a vial of sterile 5 mL 25% human albumin.

For this study we used 9 mm split-thickness half-moon cornea allograft (Catalog number: CO300AL-90) (Figure 1). During the surgery, the allograft was transported to the surgical table, removed from the sterile vial and rinsed with balanced salt solution before use. All allografts were implanted over the tube, under the conjunctiva and sutured to the sclera with several 10-0 nylon sutures (Figure 2).

Cornea allografts were used for primary (87.5%) and secondary (7.7%) surgeries as well as for the repair of exposure (4.7%). The majority of tube shunts were implanted in the superotemporal quadrant (72.7%). Thirty-three eyes (19.5%) had tube shunts in the inferior quadrants. Clinical characteristics are summarized in Table 2.

The vast majority of the allografts, 166/169 (98.2%), were stable during the follow-up period, with no evidence of immunological reaction, infection, or exposure. Three eyes (1.8%) experienced exposure of the graft or tube within the first 3 postoperative months and all these three patients had tubes superotemporally located. Two graft exposures occurred in the first postoperative month, and both cases had underlying diseases: chronic allergic conjunctivitis with history of eye rubbing and bullous pemphigoid. The third patient had tube erosion that was noticed during the third postoperative month. All three cases underwent tube revision surgery and were successfully repaired.

Tube shunt surgery for glaucoma is gaining popularity and is being increasingly used as a primary glaucoma surgery.2 Erosion of the conjunctiva overlying the tube shunt and tube exposure is a complication that significantly increases the risk of endophthalmitis.4 Coverage of the tube shunt is necessary both during primary implantation and for the repair of an eroded tube to prevent further conjunctival erosion and erosion-related infection and inflammation. In this study, we reviewed the outcomes of using a sterile gamma-irradiated cornea allograft to cover tube shunts. We found that cornea allografts were safe, effective, biocompatible, and stable for both primary implantations and secondary repair surgeries.

Traditionally, tube shunts were covered with scleral patch grafts and conjunctival erosion or exposure was found in 2%–3% of cases.19 Smith et al compared donor sclera, donor dura, and donor pericardium and none of the patch grafts used to cover tube shunts was superior to the others in preventing conjunctival erosion and exposure.20 More recently, different materials, such as processed cornea, porcine intestinal submucosa, and amniotic membrane have been used to cover tube shunts. These materials are readily prepared and commercially available for this specific purpose. Table 3 shows the rate of tube exposure for the different materials, ranging between 0%–16%.9,10,12,14,16,20–23

The use of gamma-irradiated cornea allograft has the advantages of decreased risk of disease transmission due to the sterilization process by gamma-irradiation, and shelf life of up to 2 years at room temperature. The graft material comes pre-cut in various shapes and does not require presurgical preparation.17 It has been suggested that the dense lamellar structure of the corneal tissue offers high tensile strength, rigidity, and relatively more resistance to melting when compared with the loose structure of other tissues such as sclera or pericardium.12,16 The clarity of the graft (Figure 3) allows postoperative procedures such as suture lysis and provides excellent postoperative cosmetic appearance, especially with inferiorly placed implants.

Two pilot studies found the gamma-irradiated cornea allograft to be effective and safe in tube shunt surgery with no exposures during the follow-up period.16,17 To the best of our knowledge, the current study is the largest study to date reporting the outcomes of tube shunt coverage using this patch graft. We found an exposure rate of 2% (three out of 169 eyes).

There are several studies in the literature identifying the risk factors for tube erosions. Prior or concomitant surgeries were found to induce conjunctival scarring and thinning leading to erosion.23–26 Additionally, diabetes, African–American or Hispanic ethnicity, neovascular glaucoma, previous glaucoma laser procedures, smoking and history of dry eye were also associated with erosions.23,25,26

Patch graft melting and exposure may be related to several mechanisms: high grade immune mediated process with resultant rapid melting, mechanical processes and a low grade immune-mediated long-term atrophy.20 Lankaranian et al postulated that the frequent rubbing combined with mechanical actions of the upper lid may also lead to tube erosions.22 In this current study, two of the three patients who experienced tube erosions had an underlying cause: one had bullous pemphigoid and the other had chronic allergic conjunctivitis with a history of chronic eye rubbing. Bullous pemphigoid is a common autoimmune subepidermal blistering disease characterized by poor wound healing and chronic inflammation.27,28 Chronic allergic conjunctivitis is directly linked with increased tendency for inflammation, and it was suggested that prematurely loosened sutures following keratoplasty was associated with this condition.29 Moreover, eye rubbing secondary to allergic conjunctivitis may cause mechanical insult to the patch graft and contribute to the exposure as well.

The cost of the gamma-irradiated corneal allograft in our surgical center is approximately 10% higher compared with Tutoplast pericardium, Tutoplast dura, and porcine small intestinal patch grafts. When taking into consideration the total costs of the surgery, using gamma-irradiated cornea allograft increases the cost of the surgery by approximately 1% compared with other commercially available materials.

The primary weaknesses of our study is its retrospective, non-comparative nature and our short-term follow-up period. A larger prospective comparative study is needed to fully investigate the rate of exposures with this patch graft compared to other materials.