Back to Journals » Patient Preference and Adherence » Volume 8

To what extent is treatment adherence of psychiatric patients influenced by their participation in shared decision making? 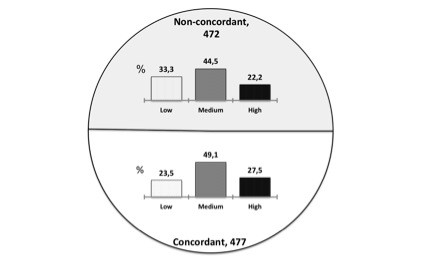 The advances of psychopharmacology in the last 5 decades have allowed broader stabilization, functional recovery, better social and vocational reintegration, and more favorable outcomes for patients with psychiatric disorders.1,2 However, medications do not work if patients do not take them. Poor adherence to pharmacologic treatment of psychiatric disorders is a worldwide problem of striking magnitude that contributes to the gap in care between best care, defined as the optimal use of proven efficacious pharmacologic therapies in psychiatric disorders, and usual care, the actual level of efficacious care being provided to psychiatric patients.3,4 Of course, adherence to prescribed psychotropic medication is relevant provided that the diagnosis of the psychiatric disorders is well established and the indication for the prescription of the drug treatment is adequate. In these cases, treatment effectiveness, crucial in severe mental illness and limited in minor psychiatric disorders, is hampered by the lack of adherence to the prescribed regimen. Half of patients with major depression for whom antidepressants are prescribed will not be taking the drugs 3 months after the initiation of therapy.5–7 Rates of adherence among patients with schizophrenia are between 50% and 60%, and among those with bipolar affective disorder, the rates are as low as 35%.8–11

Adherence is defined as “the extent to which the patient’s behavior matches agreed recommendations from the prescriber”.12 Adherence describes patient behavior in the actual taking of medicines. This definition of adherence presumes that the patient has reached some agreement with the health care professional about the prescribed medicine.13

At present, there is still a clear need to identify determinants of nonadherence that could be addressed in interventions to facilitate optimal use of medicines in psychiatric care that allow for not only a positive patient outcome but also a prevention of relapse. Review of the literature on predictors of compliance with psychiatric treatment prescribed has shown the inconsistency of sociodemographic and clinical variables.14

Although nearly 2 decades have passed since Charles et al at McMaster University proposed the hypothesis that active patient participation in the shared treatment decision-making (SDM) process will result in a greater commitment and adherence to the selected treatment regimen than to a regimen selected by the physician alone,15,16 very few studies are available at present showing that SDM actually results in patient improvement in treatment adherence that include medication adherence as an outcome.17

The aim of this study was to evaluate the influence of the match between preferred and experienced participation in SDM on self-reported adherence to prescribed treatment in psychiatric outpatient care.

From October 2013 to May 2014, 1,220 consecutive psychiatric outpatients seen in the Community Mental Health Services on Tenerife Island (Canary Islands, Spain) were invited to participate in a cross-sectional study; a total of 967 accepted. Patients were eligible for inclusion in the study if they were aged 18 years and over and were diagnosed by their psychiatrists using the International Classification of Diseases (ICD)-10 as F20 (schizophrenia), F31 (bipolar affective disorder), F32–33 (depressive disorder), F40–48 (anxiety disorder), and F60–69 (disorders of adult personality and behavior). Each participant received a full explanation of the study, after which they signed an informed consent document approved by the clinical research ethics committee of Nuestra Señora de Candelaria University Hospital in Santa Cruz de Tenerife. Each participant then filled out a brief sociodemographic survey and the remaining questionnaires.

Age, sex, educational level (no formal education, primary studies, secondary studies, and university degree), history as psychiatric patient (in years), and type of psychoactive drugs currently taken were assessed. For assessment purposes, the drugs were divided into the common groups of psychotropic drugs: antidepressants (tricyclics, selective serotonin-reuptake inhibitors [SSRIs] and serotonin–norepinephrine reuptake inhibitors [SNRIs]), benzodiazepines, antipsychotics (conventional and atypical), and mood stabilizers. For statistical analysis purposes, a new variable (number of different drugs) was drawn up as an indirect measure of treatment complexity. We also recorded how long patients had been under psychiatric treatment (in months), the number of different psychiatrists treating them during that time, and the number of psychiatric admissions specifying their voluntary or involuntary character. Patients’ diagnoses and treatments were collected from their therapeutic recommendation sheets.

Medication adherence was tested using the Spanish version of the validated eight-item self-report Morisky Medication Adherence Scale (MMAS-8).18 The questions are formulated to avoid a “yes-saying” bias, ie, the wording of item 5 is reversed to prevent the tendency to respond in a specific way to a series of questions regardless of their content. Response choices are yes/no for items 1 through 7, and a 5-point Likert response scale for the last item. Each no response is rated as 1 and each yes rated as 0, except for item 5, in which each yes response is rated as 1 and each no is rated as 0. For item 8, it is necessary to standardize the code (0–4), by dividing by four when calculating a summated score. The total score on the MMAS-8 can range from 0 to 8, with scores of 8 reflecting high adherence, 7 or 6 reflecting medium adherence, and <6 reflecting low adherence. Permission to use the scale was granted by Donald Morisky, the copyright holder of the instrument.

The Control Preferences Scale (CPS) was developed by Degner et al19 to evaluate the amount of control patients want to assume in the process of making decisions about the treatment of their diseases. There are two different formats of the scale: a questionnaire and a card-sorting version, which was used in our study. This consists of five cards on a board, each illustrating a different role in decision making by means of a cartoon and short descriptive statement. The examiner asks the respondent to choose the preferred card, which is then covered up and cannot be chosen again; the examiner then asks the respondent to choose the preferred card from the remaining four cards. The procedure continues (four choices) until one card is left. If the second preference is incongruent with the first (nonadjacent pairing, such as card A with card C), the test is explained again and immediately readministered. In the event of a further incongruence, the test is not readministered, and a preference is not assigned. Administration requires about 5 minutes. Six scores are possible based on the subject’s two most preferred roles: active–active, active–collaborative, collaborative–active, collaborative–passive, passive–collaborative, and passive–passive. These scores are grouped as active (active–active or active–collaborative), collaborative (collaborative–active or collaborative–passive), or passive (passive–collaborative or passive–passive). Evidence suggests that the CPS is clinically relevant, easily administered, and valid in health care decision making to assess preferences for participation.20 The scale was administered twice consecutively in the waiting room before the psychiatric consultation. The first administration asked patients about their preferred style of clinical decision making in their clinical encounters with their psychiatrists. The second administration asked them about the style they had usually experienced until then in their previous consultations with their psychiatrists.

We recorded a high response rate of 79%, resulting in a sample of 967 psychiatric outpatients. Table 1 shows the sample distribution according to sociodemographic and clinical variables included in the study, as well as the preferred roles and experienced roles according to the CPS, and the MMAS-8 scores.

Nearly half of the psychiatric outpatients self-reported a medium level of adherence to their psychiatric drugs prescribed, while around a quarter of them self-reported either a high or a low adherence. Most psychiatric outpatients (625 patients, 64.7%) preferred shared decisional control, while 277 (28.6%) preferred a passive approach and only 65 (6.7%) an active decisional control. The most common preferred role was for the doctor and patient sharing responsibility for deciding what treatment is best (62.3%). The experienced roles self-reported according to the CPS were mostly passive (772 patients, 77.8%), followed by a collaborative approach (212 patients, 21.9%), with only three patients (0.3%) self-reporting active decisional control. The most common experienced role was for the doctor to make the final decision after considering the patient’s opinion (50.4%). Congruence between patients’ preferred and experienced involvement in medical decision making was achieved in half of the psychiatric outpatients participating in the study. In cases of mismatch, the vast majority of patients preferred more involvement than they experienced.

In Table 2 are represented the distribution of the three levels of adherence to treatment according to participation preferences and experiences and also to congruence between patients’ preferred and perceived participation. Patients who preferred a passive role in decision making were significantly more likely to self-report adherence to their psychiatric treatment than patients who preferred a more active role. Concerning the role experienced in their psychiatric consultations, self-reported adherence was higher in patients experiencing more active roles, but the differences registered were of no significance (Figure 1). Self-reported adherence was significantly higher in those patients for whom preferences and experiences of participation in decision making matched than in those patients where they did not match. According to the specific type of matching (active with active, collaborative with collaborative, and passive with passive), no differences were found in self-reported adherence.

This is the first large, community psychiatry-based survey to explore to what extent the treatment adherence of psychiatric patients is influenced by the concordance between their preferred participation and their actual participation in decision making.

Some limitations of this study should be considered. First and foremost, our research did not study patient consultations directly, but only registered patients’ perceptions of decision-making styles. Second, since a cross-sectional survey was carried out, the study could only demonstrate associations and not causality. Another limitation is that preferences for decision making were measured as a state trait, and role preferences are dynamic and could vary during decision making, requiring regular clinical assessment to meet patients’ expectations. Also, we measured a general role in a general process of decision making, but patients can prefer different roles according to the different stages in the decision-making process that the CPS does not allow. Finally, given the explorative nature of the study carried out, our results should be interpreted with caution, and more research is required to replicate and evaluate the relevance of our findings.

In conclusion, mental health care professionals should be sensitive to patients’ individual preferences and participation wishes, and respond to those without trying to impose a preconceived attitude. This is the hallmark of personalized psychiatry.