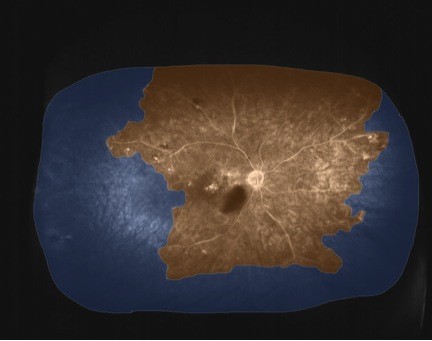 Introduction: Peripheral retinal ischemia not detectable by conventional fluorescein angiography has been proposed to be a driving force for rebound edema in retinal vein occlusions. In this report, we examine the treatment of peripheral retinal ischemia with targeted retinal photocoagulation (TRP) to manage a patient’s rebound edema.
Methods: To assess the extent of peripheral nonperfusion, an Optos 200Tx device was used. To target the treatment to peripheral ischemia areas, a Navilas Panretinal Laser was used.
Results: A 64-year-old male with a central retinal vein occlusion and a visual acuity 20/300, and central macular thickness 318 µm presented with rubeosis. Angiography revealed extensive peripheral nonperfusion. Despite TRP to areas of irreversible ischemia, after 2 months, he continued show rubeosis and rebound edema. Additional TRP laser was repeatedly added more posteriorly to areas of reversible nonperfusion, resulting in eventual resolution of rubeosis and edema.
Conclusion: In this study, we demonstrate the use of widefield imaging with targeted photocoagulation of peripheral ischemia to treat rebound edema, while preserving most peripheral vision. In order to treat rebound edema, extensive TRP, across reversible and nonreversible areas of ischemia, had to be performed – not just in areas of nonreversible peripheral ischemia. These areas need to be mapped during episodes of rebound edema, when ischemia is at its maximum. In this way, by doing the most TRP possible, the cycle of rebound edema can be broken.