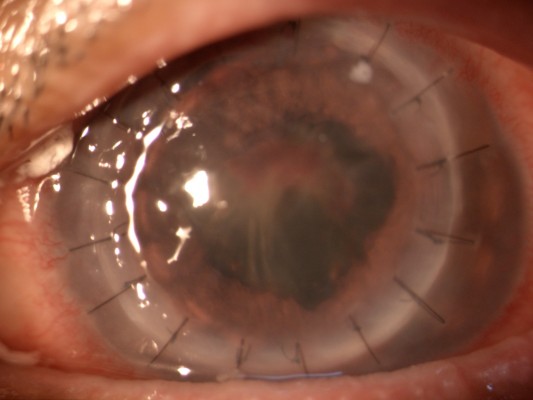 Objective: To report a patient with severe Chrysosporium keratitis successfully treated by voriconazole.
Method: Case report.
Results: A 37-year-old healthy male presented with irritation, pain and reduced vision in his left eye after mud contamination. Examination demonstrated corneal stromal infiltration, endothelial plaque and hypopyon. Corneal scrapings demonstrated numerous septate hyphae, and specimen cultures were positive for Chrysosporium sp. The lesion did not respond to aggressive topical 5% natamycin, 0.15% topical amphotericin B and oral itraconazole. The patient was then treated by topical 1% voriconazole every hour. Intracameral and intrastromal voriconazole injections (50  μg/0.1  mL) were also undertaken. The keratitis was significantly improved after voriconazole.
Conclusion: To the best of the authors’ knowledge, this is the first report on the use of voriconazole for Chrysosporium keratitis. Voriconazole may be an effective alternative to conventional antifungal agents in some cases of fungal keratitis. It should be considered before shifting to therapeutic keratoplasty.

Chrysosporium is an unusual filamentous fungus commonly isolated from soil and occasionally encountered in the laboratory as contaminants of cutaneous and respiratory specimens.1 Although human infection is very rare, it can lead to either serious systemic or ocular diseases.2–4 In the literature review, there were only two case reports on ocular infection. Both cases did not respond to aggressive medical treatment and ended up with surgical interventions.3,4 The authors herein report a first case with severe Chrysosporium keratitis successfully treated with voriconazole. The patient has signed written informed consent for the case details and accompanying images to be published.

A 37-year-old male presented with irritation, pain and reduced vision in the left eye after mud contamination. On examination, his best-corrected visual acuity in the left eye was hand movements and the right eye was 6/6. The left eye revealed a central, irregular, 6.8×7.4 mm infiltration with a feathery edge and satellite lesions. The hypopyon level was about 2–3 mm (Figure 1). Corneal scraping revealed numerous septate hyphae. The patient was first treated with topical 5% natamycin, 0.15% amphotericin B eye drops hourly and oral itraconazole 200 mg daily. Intracameral and intrastromal amphotericin B (5 µg/0.1 mL) injections were also undertaken. However, there was no significant clinical improvement. Three days after presentation, infiltration began to deteriorate.

The patient was then treated with topical 1% voriconazole every 1 h, and topical natamycin was discontinued. Additionally, intracameral and intrastromal injections of voriconazole (50 mg/0.1 mL) were given. Two days after treatment, slit-lamp examination showed marked improvement with a decreased corneal infiltrate and hypopyon. Chrysosporium sp. was identified by corneal cultures 3 days later. After 7 days of voriconazole treatment, the corneal infiltration was decreased to 5.4×6.2 mm surrounded by corneal scarring, and no hypopyon was detected. The topical and systemic medications were continued and tapered according to clinical findings. Finally, the lesion healed to be corneal scar and visual acuity was 4/60. One month later, the patient underwent penetrating keratoplasty for corneal scar (Figure 2). Immediate postoperative visual acuity in his left eye was 6/36 and final best-corrected visual acuity was 6/18 at 3 months after the procedure.

Chrysosporium is classified in Kingdom Fungi, Phylum Ascomycota, Class Eurotiomycetes, Order Onygenales and Family Onygenaceae. It is a keratinophilic filamentous fungus commonly isolated from soil and occasionally encountered in the laboratory as contaminants of cutaneous and respiratory specimens.1 Although human infection is very rare, it can lead to either serious systemic or ocular diseases.2–4 Among ocular infections, there were only two reports, which were keratomycosis and endophthalmitis from literature search. Medical failure has been reported, and surgical debridements, penetrating keratoplasty and pars plana vitrectomy were required in both cases.3,4

For the keratomycosis case, corneal infiltration was deteriorating and perforation was detected after natamycin eyedrops treatment. Emergency penetrating keratoplasty was undertaken.3 In this study, the fungus did not respond to topical natamycin, which corresponded to previous report. In the endophthalmitis case, diluted intravitreal amphotericin B (1 mg/0.1 mL) was injected after pars plana vitrectomy with topical antibiotics, intravenous antibiotics and oral itraconazole.4 To the best of the authors’ knowledge, this is the first report on the successful treatment of Chrysosporium keratitis with voriconazole.

Information about in vitro studies of antifungal agents for Chrysosporium sp. is limited. In one study that is included, the strains of Chrysosporium zonatum infection of lung and bone showed that the organism is susceptible to amphotericin B but moderately resistant to itraconazole and fluconazole, whereas 5-fluorocytosine was not effective.1 These data have suggested that current azoles may not be clinically active against the organism. The patient in this study, however, did not respond to either amphotericin B or itraconazole treatment.

Voriconazole is increasingly used as a first-line treatment for ocular fungal infections because of excellent in vitro activity against a wide range of keratitis isolates.5 Eventhough the evidence shows that natamycin is more effective than voriconazole in the treatment of fungal ulcers,6,7 voriconazole has been reported to be an alternative option in some cases such as drug-resistant fungal keratitis or rare fungal species causing keratitis.8,9

In conclusion, voriconazole may be an alternate option for some fungal species causing keratomycosis. Due to the high rate of complications after penetrating keratoplasty in active fungal keratitis, voriconazole may be considered before radical surgery is scheduled. Moreover, natamycin may not be more effective than voriconazole in all fungal keratitis cases. Standardized susceptibility testing methods using ocular strains may be required for future decisions and management. Clinical correlation, however, is still the most important clue for the treatment.

The authors would like to thank Prof James A Will (University of Wisconsin, USA) for editing the manuscript via Publication Clinic KKU, Thailand, and Dr Wathanee Sripawadkul (Department of Ophthalmology, Faculty of Medicine, Khon Kaen University) for her assistance in manuscript preparation.