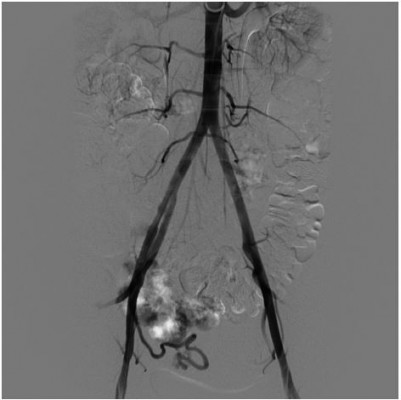 Objective: This paper reports on a rare case of pregnancy after uterine artery embolization (UAE) for uterine arteriovenous malformation (AVM). Debate exists about persistence of fertility in women after UAE. Adverse effects of this technique can modify both uterine echostructure, inducing necrosis and infarction, endometrial atrophy and uterine artery rupture, and ovarian reserve, causing persistent amenorrhea. Ovarian reserve appears to be affected by UAE in premenopausal women. However, younger ovaries (according to biological ovarian age) exhibit a greater capacity for recovery after ovarian damage. Therefore, larger studies are needed for more conclusive results.
Case report: A 28-year-old woman was admitted to our department due to life-threatening uterine bleeding, resulting in tachycardia, pallor, and sweating. The patient came with a history of two spontaneous miscarriages. After sonography and computed tomography, AVMs were identified at uterine fundus and anterior wall.
Conclusion: The pathogenesis of infertility after UAE is not yet known. The peculiarity of this case was that, only few months later, the patient became pregnant and gave birth to a live fetus at 37 weeks with cesarean delivery.

Although some cases have been found in adolescent and postmenopausal women, fertile age represents the most frequent period for AVMs discovery. Pregnancy, miscarriage, induced abortion, and trophoblastic disease are critical events for pathogenesis of these malformations. After chorionic villi necrosis, the incorporation of venous sinuses in scars within the myometrium leads to the development of AVMs. Generally, trophoblast invades uteroplacental arteries during the first two trimesters, inducing artery enlargement resistance reduction. Then, during the third trimester, re-endothelialization takes place. Some authors suggest that involution of placental bed vessels could cause uterine AVMs.

According to this theory, in subinvolution of placental bed vessels, uteroplacental arteries maintain characteristics similar to those of the first two trimesters.3–5

The most common clinical presentation is pelvic bleeding, which can cause hemorrhagic shock and anemia. Anemic and hemodynamically unstable patients need treatment; women with only a single episode of metrorrhagia and hemodynamically stable should only be monitored. In the latter, a conservative approach using methylergonovine maleate, danazol, and Gn-RH agonists is recommended.6

A three-dimensional computed tomography (CT) (16–32 T) represents the gold standard for diagnosis, however, transvaginal color Doppler ultrasound is equally efficient and no invasive. AVMs appear as areas of abnormal turbulent vascularity within myometrium, with irregular morphology. Angiography is now used only for therapeutic treatments.

A 28-year-old woman, gravida 2, para 0, was admitted to our department due to severe uterine bleeding (pictorial blood loss assessment chart score>100), resulting in tachycardia, pallor, and sweating. She referred an interesting clinical history.

At the age of 26 years, a 80.4×73.5 mm myomic nodule was diagnosed on the right side of the uterine wall by routine gynecological sonography. Following failure of therapy with enantone (11.25 fl), it was proposed for laparoscopic myomectomy surgery performed on 31/01/2014.

At the age of 27 years, the patient had a spontaneous miscarriage at eighth week of gestation, for which a uterine curettage was performed.

Six months later, the patient was admitted for another uterine curettage owing to spontaneous miscarriage at 7 weeks and 4 days of gestation.

Sonography revealed the presence of two gestational sacs, one on the left with embryonic nonpulsating echoes and one on the right with no embryonic echoes but only the yolk sac.

In the latter, the chorion appeared thickened and irregular with thin residual myometrium. Doppler showed a rich vascularization of the chorionic tissue. The presence of placental thickening, a very high β-hCG value (214,199 mUI/mL) and a cystic right ovary, suggested the occurrence of gestational trophoblastic disease.

At the age of 28 years, sonography and CT scan showed an uterus with slightly increased volume with innumerable, coarse, and serpiginous vascular ectasia in the peripheral muscle tissue (Figures 1 and 2).

These ectasias were fed by arterial branches from hypogastric circle at both sides and right ovarian artery.

The patient showed surprise because she had never heard of this disorder and dismay for fear of not being able to cure it. She was not on bed rest, and she had not taken extra medicines.

She was transfused with four blood bags of concentrated red cells.

The patient was carried to interventional radiology where she signed an informed consent and was treated with UAE in the angiography room (in the presence of an anesthetist).

This team has treated similar cases using the same technique of embolization in the same University Hospital. The five cases of uterine arteriovenous malformation (AVM) treated with this technique did not affect the fertility of the patients. Patients were advised to wait for a period of 6 months before becoming pregnant and a CT scan was performed after embolization to ensure the disappearance of AVM. All the patients became pregnant without complications. None had abortions.

In our case, through percutaneous access from right femoral artery to both hypogastric arteries, uterine arteries were reached, where a bilateral superselective catheterization was performed (Terumo-SP). (Figure 3) After angiographic morphological study of the target vessels, the embolic material (Onyx: ethylene vinyl alcohol copolymer [EVOH]) was injected (Figure 4).

It is composed of a part of properly embolic material (EVOH) and a solvent, which prevents the Onyx solidification into the catheter (DMSO).

The embolization was stopped when the nidus appeared totally embolized by Onyx (Figure 5).

The patient was monitored for 5 days in our department, and treated with oral iron supplement, folic acid, and meropenem.

She was submitted to control sonography and CT that confirmed the disappearance of vascular ectasia.

Sonography showed the presence of a single gestational sac in uterus, containing an embryonic pole with cardiac activity, with a 10 mm crown rump length (CRL), according to amenorrhea period.

Ultrasound showed a placenta with an anterior insertion with a little area of abruption (5×2 mm) at the superior pole.

The patient, bed resting, was treated with vaginal and intramuscular progesterone, acetylsalicylic acid, and spasmolytics.

At 32 weeks of gestation, the patient stopped therapy with acetylsalicylic acid and started enoxaparina 40,000 U (1 fl s.c./die).

At 37 weeks, the patient went into spontaneous labor, necessitating a cesarean section to have better control of bleeding risk.

No adverse events occurred during delivery. At the time of delivery, the neonatologist was present and confirmed the absence of neonatal pathological changes.

The patient and her child went home on time.

This is a case report for which the patient signed the informed consent, providing her approval and consent to publish this report. The authors advise that the approval from Ethics Committee of University Hospital of Salerno was not required.

Uterine AVMs are rare lesions characterized by the presence of shunts between the myometrial arteries and veins.2,5,10–12

In uterus, these lesions appear as increased vascularization areas within the myometrium (ultrasonography allows this area identification) with a low resistance, high velocity, and turbulent blood flow.10,15

The waveform is usually broad with an irregular spectral envelope, suggesting a turbulent flow resulting from the numerous direct arteriovenous connections.

The most frequent presenting symptom of AVM is profuse menorrhagia or metrorrhagia that does not respond to medical treatment, eventually leading to anemia; other symptoms are lower abdominal pain and dyspareunia. In a systematic review, bleeding was reported in 84% of patients with AVM, and in 30% of cases of bleeding, blood transfusion was necessary.16–18

Barral et al5 described that out of 12 women, three became pregnant after uterine artery UAE, but only one pregnancy was carried to term.

Recently, UAE is used for fibroid therapy. First described in 1995,19 as a radiological treatment for uncontrolled onco-gynecologic and obstetric uterine bleeding, it has become an important conservative therapy for women with symptomatic uterine fibroids.20,21

Vilos et al demonstrated that the rate of pregnancy after UAE is lower than after surgical myomectomy, so they recommend embolization only for women that do not desire future pregnancy22,23 as a second-line treatment, or in case of contraindication to surgical myomectomy.24

The National Institute of Health and Care Excellence guideline from 2010 states that: “patients contemplating pregnancy should be informed that the effects on future fertility are uncertain”.32 The Royal College of Obstetricians and Gynecologists guideline from 2013 concludes that there is poor evidence regarding fertility after UAE. So UAE treatment in women in fertile age that wish to become pregnant, can take place only after an informed discussion.32 The Danish National Guideline confirms those recommendations.32 A Cochrane review from 2014 concluded that there were not sufficient evidence to define fertility rate after UAE.32,33

Karlsen demonstrated that UAE can result in endometrium ischemia,32 and, according to Calzolari,2 provokes a “postembolization syndrome”, such as massive necrosis and infarction of the uterus, pelvic pain, and uterine artery rupture.34

In a hysteroscopic and endometrial histologic study carried out 6 months after UAE, it has been revealed that 90% women had a normal endometrium, but only 37% revealed entirely normal hysteroscopy findings.35

Razavi et al supposed that uterine arteries embolization can induce premature menopause, caused by embolic particles reflux throughout anastomosis formed by uterine and ovarian arteries.36,37 Differently, another study showed that AMH (reliable marker of ovarian reserve) did not decrease after embolization in women of age <40 years.1,38 Probably, fertility rate reduction is due to another unknown mechanism.

In cases of pregnancy, UAE can cause complications, such as miscarriage, placenta previa or accrete,39,40 postpartum hemorrhage, and high cesarean section rate, and intrauterine growth restriction for the fetus.41

Contrasting the theories suggesting lower rate of fertility, a review from 2016 concluded that UAE is a procedure as efficient as myomectomy for women that wish to conceive.36

In conclusion, our experience from reported clinical case suggests that embolization for uterine AVM executed in symptomatic and hemodynamically unstable patients guarantees both symptoms resolution and the possibility to carry to term a pregnancy, without risks neither for mother nor for fetus.