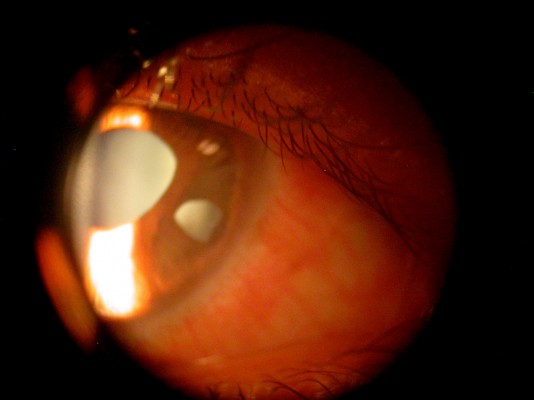 
Purpose: To report a case of a young patient with retinitis pigmentosa (RP), essential iris atrophy, and glaucoma.
Case report: This report presents a case of a 22-year-old female patient with unilateral glaucoma, increased intraocular pressure, increased cup–disc ratio, iris atrophy, peripheral anterior synechiae, and bilateral RP.
Discussion: The patient presented glaucoma due to the iridocorneal endothelial syndrome, despite low age. RP is a bilateral disorder that may be associated with angle-closure glaucoma.

Essential iris atrophy is one of the subtypes of iridocorneal endothelial (ICE) syndrome, which is a spectrum of disorders characterized by corneal proliferative endotheliopathy, associated with corneal edema, anterior chamber and iris stroma abnormalities, and glaucoma.1 Other variants of ICE syndrome are Chandler’s syndrome and Cogan-Reese syndrome. The essential iris atrophy usually affects females, generally over 30 years old. It is unilateral, and it is associated with iris holes, peripheral anterior synechiae, and corneal alterations.1 Approximately 50% of the cases present glaucoma, and it is probably caused by peripheral anterior synechiae and by a cellular membrane that covers the trabecular surface. The treatment for glaucoma is clinical; however, there is frequent surgical indication of trabeculectomy.

Retinitis pigmentosa (RP) is characterized by progressive decrease in night vision and progressive visual field loss due to cellular retinal dystrophy. The fundoscopy shows characteristic bone-spicules pigment.2 RP does not present a defined inheritance pattern, and it might occur in an autosomal dominant, recessive, or X-linked fashion.3 It can also be related to other systemic and ocular manifestations.

A 22-year-old white female patient reported the diagnosis of RP that she had 7 years before. Having gone through many examinations along this period, 1 year ago, it was diagnosed increased intraocular pressure (IOP) in the right eye (OD). The patient had misused hypotensive eye drops: prostaglandin analogs, carbonic anhydrase inhibitors, and B-adrenergic antagonists. She had interrupted the use of eye drops for 3 months. There was no family history of either RP or glaucoma. No ethical approval was required for this procedure. Patient consent was obtained before undergoing treatment.

In the ophthalmic examination, the best-corrected visual acuity was OD: 20/50 (-1,00 cyl ×115) and left eye (OS): 20/25 (+2,00 sph -1,00 cyl ×10). The slit lamp examination showed multiple iris holes and corectopia in OD (Figures 1 and 2), clear cornea in both eyes (OU), and no alterations in OS. IOP by Goldmann applanation tonometry was OD: 34 mmHg and OS: 16 mmHg at 3 pm. The gonioscopy revealed 360° isolated peripheral anterior synechiae in OD (Figure 3) and a visible open-angle up to ciliary body in OS. The fundoscopy (Figures 4 and 5) presented cup–disc ratio 0.9 vertical (V) ×0.9 horizontal (H), visible lamina cribrosa pores, preserved macula, and peripheral pigment mobilization in OD. In OS, the fundoscopy revealed cup–disc ratio 0.3 V ×0.3 H, preserved macula, and peripheral pigment mobilization. The automated perimetry (Figures 6 and 7) and manual perimetry (Figures 8 and 9) showed central island vision in OD and ring scotoma in OS. The ultrasound pachymetry was 524 μm and 530 μm in OD and OS, respectively. The specular microscopy revealed pleomorphism and polymegathism in OU (Figures 10 and 11). Fluorescein angiography featured blocked fluorescence in the peripheral pigment mobilization areas in OU.

After failure of the clinical treatment to diminish IOP in OD, trabeculectomy was performed in this eye and IOP was controlled.

The most frequent glaucoma associated with RP is angle-closure glaucoma.2,4–6 The prevalence of glaucoma in patients with RP can be up to 2.3%.4 However, a study of 40 patients with RP found a prevalence of 12.5% of primary glaucoma.7 In the literature, there are reports of glaucoma associated with RP in inherited isolated or secondary cases, such as Sturge–Weber syndrome,8,9 retinal neovascularization,10 familial nephropathy,11 bilateral ectopia lentis,12 and Fuchs heterochromic cyclitis.13 There are also case reports of patients with RP who mimic glaucomatous visual field defect14 and abnormal nerve fiber layer of the retina, similar to those found in patients with glaucoma.15

In this case, we believe that glaucoma is associated with ICE syndrome because the patient has unilateral glaucoma and iris essential atrophy in the same eye. The patient also presents alterations in specular microscopy and in the anterior chamber in OD, which might be related to essential iris atrophy. The perimetry examinations demonstrate a glaucoma typical defect in OD and a RP typical defect in OS.

There was no response to the clinical treatment with hypotensive eye drops. Therefore, the patient underwent trabeculectomy in OD, and the IOP was controlled.

The authors declare that there are no conflicts of interest.