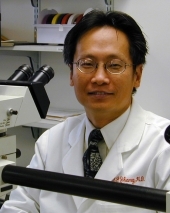 Paul J. Zhang is currently a Professor of Pathology and Laboratory Medicine at the University of Pennsylvania and has been practicing pathology in academic institutions for 15 years. Graduating from Guangzhou Medical College in China in 1983, he immigrated to the US in 1985. He was a research associate in Dr. Jack Levin’s laboratory in the Department of Laboratory Medicine, University of California San Francisco, before entering an AP/CP residency program in New York University in 1989. After four years of residency training in NYU, he did a year of intensive fellowship training in oncologic pathology at Sloan Kettering Memorial Cancer Center, New York City, under the chairmanship of world renowned Dr. Juan Rosai from 1993–1994. In 1994, he started his academic career at Roswell Park Cancer Institute, Buffalo, New York, under the Chairmanship of Dr. John J Brooks.  In 1998, he moved to his current institution, the Hospital of the University of Pennsylvania in Philadelphia, Pennsylvania. During his academic career, he has served as Director of Diagnostic Immunohistochemistry in both Roswell Park and the Hospital of the University of Pennsylvania and published more than 100 peer-reviewed articles in various medical and pathology journals, as well as a number of book chapters, and books.  His research interest has been oncology pathology with the main focus on sarcoma, breast cancer and female genital tract cancer. Applying immunohistochemical, in-situ molecular morphologic and various matrix-based molecular techniques and collaborating with basic scientists and clinical colleagues, his research efforts are mainly focused on translating basic scientific research findings to clinical applications.  The benefits to patient care are reliable biomarkers for cancer diagnosis, prognosis and therapy prediction and a better understanding of cancer biology.