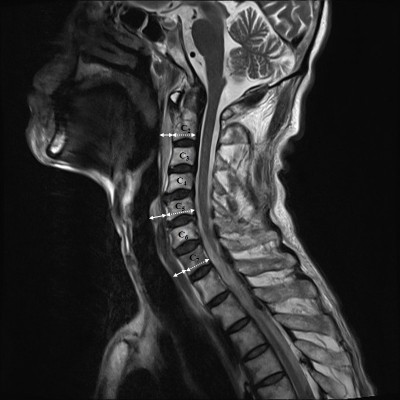 Airway management is a major concern in patients with traumatic cervical spine injury. Although high-level cervical spine injury is associated with severe respiratory compromise requiring aggressive airway management, such management is difficult. Manual in-line stabilization (MILS) is routinely used to immobilize the cervical spine during endotracheal intubation, because excessive cervical motion may deteriorate spinal cord injury by mechanical cord compression or secondary ischemia. However, limited head extension during this technique increases the difficulty of aligning the oropharyngeal and laryngeal axes and may disturb the epiglottis and vocal cord visibility in direct laryngoscopy, resulting in difficult laryngoscopy and endotracheal intubation.

Importantly, retropharyngeal hemorrhage caused by cervical spine fracture, whiplash injury, vessel injury of the neck or spontaneously is reportedly associated with respiratory compromise.1–6 A few case reports have revealed that severe retropharyngeal hematoma following traumatic cervical spine injury can lead to life-threatening respiratory complications, such as upper airway obstruction and resultant difficult endotracheal intubation.1,2,7 The retropharyngeal space (RPS) is a potential space that extends from the base of the skull to the superior mediastinum at the level of the second thoracic vertebra; it lies posterior to buccopharyngeal fascia and pharynx and anterior to the prevertebral fascia and musculature.8 Theoretically, a large retropharyngeal hematoma may extend anteriorly and may displace and compress the pharyngeal cavity, resulting in difficult airway management. However, no report has clearly elucidated the relationship between the severity of RPS extension and the difficulty of endotracheal intubation in patients with traumatic cervical spine injury. The aim of this retrospective study was to investigate whether radiologic measurement of RPS may be a useful predictor of difficult endotracheal intubation by direct laryngoscopy in patients with traumatic cervical spine injury.

This retrospective study was approved by the institutional review board of Chonbuk National University Hospital, which waived the requirement for informed consent. The study was conducted in accordance with the Good Clinical Practice and the International Conference on Harmonization guidelines and in conformity with the ethical principles of the Declaration of Helsinki. The medical records of 250 patients who underwent surgery under general anesthesia to treat traumatic cervical spine injury, at a single institution during the period from January 2011 to December 2018, were evaluated. Among them, 79 patients who had undergone endotracheal intubation by direct laryngoscopy with MILS to secure the airway during anesthesia induction were identified, based on anesthesia records in the electronic medical records. Demographic data, cause of cervical spine injury, and diagnosis by preoperative magnetic resonance imaging (MRI) were also recorded. Seventeen patients who had undergone delayed surgery (beyond 72 hours after obtaining MRI scan of the cervical spine) were excluded from the analysis to clarify the study results.

Quantitative analysis of RPS in MRI

To obtain the RPS thickness, we measured the maximal anteroposterior distance between the posterior margin of the pharynx, larynx or trachea and the anterior bony margin of cervical vertebra in the median sagittal plane of the T2-weighted MR sequences of cervical spine, which were scanned within 72 hours prior to surgery. The proportion of RPS to vertebral body was calculated as a ratio of the RPS thickness to antero-posterior (A–P) diameter of each vertebral body multiplied by 100. The measurements were performed in the same manner in the upper (2nd), middle (5th) and lower (7th) cervical vertebra (described in Figure 1). We also measured the A–P distances of the patient’s airway including oropharynx, hypopharynx, larynx and trachea. The landmarks for the measurements are as follows: oropharynx, from the root of tongue to the posterior pharyngeal wall; hypopharynx, from the vallecular fossa to the posterior pharyngeal wall; larynx, from anterior commissure to posterior commissure in the true vocal cord; and trachea, from anterior to posterior trachea wall, 5 cm above the carina.

Univariate analysis revealed that difficult laryngoscopy during anesthesia induction in cervical spine injury patient was significantly associated with RPS thickness at C2, the proportion of RPS to the 2nd cervical vertebral body and the A–P diameter of the patient’s airway in median sagittal MRI images (ORs and 95% CIs are shown in Table 3).

In linear regression analysis, there was a linear correlation between C-L grade and RPS thickness at C2 (r=0.738, r2=0.545; p<0.001), as well as between C-L grade and proportion of RPS to the 2nd cervical vertebral body (r=0.710, r2=0.505; p<0.001) (Figure 3). However, A–P diameters of airway, including oropharynx, hypopharynx and larynx, were not significantly correlated with laryngoscopic grade.

The maximum normal thicknesses of the retropharyngeal and prevertebral space on the lateral plain radiography of neck have been reported to be 8–11 mm at C1, 6 mm at C2, 7 mm at C3, 8 mm at C4, 22 mm at C5, 19–20 mm at C6 and 20–21 mm at C7.9 Meanwhile, the thickness of the RPS varies widely in adults, so that these absolute measurements may be of limited use. Some investigators have established a method to evaluate RPS thickness by measuring the ratio of RPS to the A–P diameter of the cervical vertebral body.10 In this study, RPS thickness at C2 and the proportion of RPS to the 2nd cervical vertebral body were significant variables in a univariate logistic regression model, and therefore, both variables may be valuable predictors of difficult airway in patients with traumatic cervical spine injury. Although several radiologic predictors for difficult laryngoscopy have been suggested using plain radiography,11–14 these studies recruited a small number of patients; furthermore, their variables are complicated to measure and apply in clinical practice. In contrast, with pre-scanned MRI images of the cervical spine, physicians may easily gain valuable information for airway management such as RPS thickness and the proportion of RPS to the vertebral body, as described in Figure 1. Careful preoperative preparation for difficult airway management should be planned if extension of RPS was detected in pre-scanned MRI of the cervical spine.

There are a few study limitations. First, several clinical predictors of difficult laryngoscopy, such as Mallampati classification, thyromental distance (TMD) and mandibular retrognathia, can be useful to predict difficult laryngoscopy and intubation.22,23 However, these individual physical parameters were not evaluated due to the limitation of the retrospective study. Second, the severity of RPS extension cannot be precisely matched between the time of MRI scanning and endotracheal intubation under general anesthesia. To minimize this discrepancy, we excluded patients who had undergone delayed surgery (beyond 72 hours after MRI scanning). Third, the structure of the cervical spine during general anesthesia might be different from that in the awake state due to the loss of consciousness and the usage of neuromuscular blocking agent. However, the MILS technique was used to neutrally stabilize the cervical spine and minimize spinal cord injury in all patients. Fourth, as the current study in not randomized, the potential confounders that may affect the results may exist.

This study was supported by funds from the Biomedical Research Institute of Chonbuk National University Hospital, Jeonju, South Korea.

All authors contributed toward data analysis, drafting and critically revising the paper, gave final approval of the version to be published and agree to be accountable for all aspects of the work.