Oxidative stress and antibacterial properties of a graphene oxide-cystamine nanohybrid 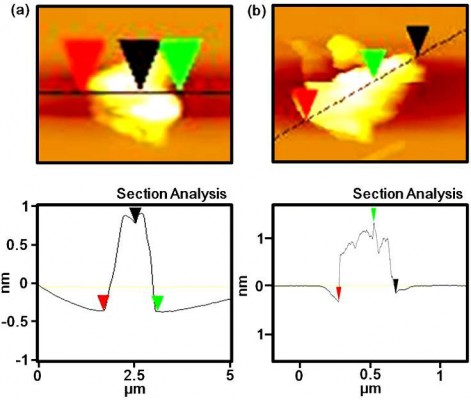 Abstract: Oxidative stress can damage proteins, DNA, and lipids, and is involved in the progression of many diseases. Damage to infected cells caused by oxidative stress is related to increased levels of reactive oxygen species, including hydrogen peroxide. During oxidative stress, hydrogen peroxide levels are often increased and catalase level decreased inside cells. This can lead to the death of skin and other cells. Hydrophobic low molecular weight compounds are useful in treating hemorrhagic conditions of the skin. To this end, cystamine has been successfully conjugated with graphene oxide (GO) as a drug carrier. The current study used the microdilution method to determine the minimum inhibitory concentrations of cystamine-conjugated GO against four types of pathogenic bacteria. Minimum inhibitory concentrations values were 1 µg/mL against Escherichia coli and Salmonella typhimurium, 6 µg/mL against Enterococcus faecalis, and 4 µg/mL against Bacillus subtilis. Toxicity of the conjugate against squamous cell carcinoma 7 cells was minimal at low concentrations, but increased in a dose-dependent manner. These results demonstrated that our protocol produced a cystamine-conjugated GO with low cytotoxicity, but strong reactive oxygen species effects and high antibacterial activity. This nanohybrid may be useful in the treatment of dermatological disorders. Moreover, this class of nanohybrid may have other biomedical applications due to their low cytotoxicity and high antibacterial activity.

The cellular generation of reactive oxygen species (ROS) exposes aerobic living organisms to what is referred to as the “oxygen paradox”; a situation where oxygen is necessary for life but potentially hazardous because the ROS produced may cause cell and tissue injury. These effects of oxygen on living organisms are recognized by extensive free radical research.1–9

Graphene oxide (GO) has a large surface area that can be used for the immobilization of various biomolecules. GO has been proposed as a candidate for drug delivery.10,11 Although the biological applications of GO have not been well-studied, its biocompatibility was studied successfully in fibroblast cells (L-929)12 and it has been employed as a carrier for controlled drug delivery and the release of anticancer drugs.13,14 Previous studies also reported that graphene induced oxidative stress on neural pheochromocytoma-derived PC12 cells,15 and Liu et al reported PEGylated nano-GO could be used to deliver water insoluble anticancer drugs without any toxicity.10,11

After oxidation, hydroxyl and carboxyl groups are formed in GO and, when conjugated, such particles can be effectively dispersed in aqueous solutions.16 By conjugating GO with cystamine, we designed a material expected to induce cell death by generating ROS. Cystamine contains disulfide bonds (S-S) that are a primary structural component of some proteins.17 For example, disulfide bonds are found in cell-surface proteins.17 ERO1 is classified as a sulfhydryl oxidase. Experiments have shown that the ERO1 protein contains ERO1α and ERO1β that convert oxygen to hydrogen peroxide (H2O2).18,19 In order to increase the production of ROS, we conjugated cystamine with GO, which can easily interact with sulfhydryl oxidases.19

The present research emphasized a new family of cystamine-conjugated and GO-mediated drug delivery systems. Here, we described the chemical synthesis of this nanocarrier. Fourier transform infrared spectroscopy was used to elucidate the interaction between constituents and to characterize the product of the chemical synthesis. All toxicity experiments were performed using murine squamous cell carcinoma (SCC7) cells.

The synthesis of GO was carried out through a modification of Hummer’s method.28 Briefly, a mixture of graphite flakes (2 g) and sodium nitrate (1 g) was cooled to 0°C in an ice bath. Concentrated sulfuric acid (60 mL) was added to the mixture and then potassium permanganate (9 g) was added slowly to keep the reaction temperature below 5°C. When the addition of potassium permanganate was complete, the reaction mixture was warmed to 35°C and stirred for 7 hours. The reaction mixture was then cooled to room temperature and poured into ice water (55 mL). Then, 7 mL of hydrogen peroxide was added, followed by the addition of 90 mL of ice water after separation. The reaction was subsequently stirred for 7 hours and then subjected to filtration. After filtration, the product was washed three times with hydrochloric acid and then with deionized water for 120 hours. All chemicals were purchased from Sigma-Aldrich Co. (St Louis, MO, USA) except hydrogen peroxide which was purchased from Daejon Chemicals.

Aqueous suspensions of GO (1 mg/mL in 10 mL) were prepared by sonicating GO for 1 hour. Cystamine conjugation was performed by adding GO suspensions (50 μg/mL) to a buffered solution of cystamine (2 mg of cystamine in 10 mM Tris buffer, pH 8.5). After shaking for 2 hours, conjugated GO was collected on a cellulose membrane filter, washed three times with deionized water, and dried under vacuum.

Murine SCC7 cells were cultured with cystamine-conjugated GO for 24 hours at concentrations from 5–300 μg/mL. The MTT (3-(4,5-dimethylthiazol-2-yl)-2,5-diphenyltetrazolium bromide) assay was used to measure cell survival as a percentage of viable cells in comparison to untreated controls. After treatment with cystamine-conjugated GO, 200 μL of a 0.5 g/L MTT solution in Roswell Park Memorial Institute medium-1640 (1:10) was added to each well. Cells were incubated at 37°C for 2 hours to allow color to develop, and 200 μL of 20% dimethyl sulfoxide was added. Absorbance was measured at 570 nm.

Production of ROS by cystamine-conjugated GO

The oxidant-sensitive dye 2′,7′-dichlorofluorescein diacetate (DCFH-DA) was used to assess the production of ROS. SCC7 cells were plated in 96-well plates (5×103 cells per well) and incubated for 24 hours. Cells were then treated with 5–200 μg/mL GO or cystamine-conjugated GO and incubated for an additional 24 hours. Positive controls involved culturing cells in the presence of 200 mM H2O2 prepared 1 hour before adding to cells loaded with the DCFH-DA probe. The probe was loaded into cells by replacing the culture medium with 100 μL of fresh medium containing 20 μM DCFH-DA. Cells were washed with D-Hank’s buffer solution after 1 hour. Then, 100 μL of D-Hank’s buffer solution was added to each well and fluorescence intensity measured using a microplate reader at 485 nm.

The microdilution method was used with two Gram-negative bacterial strains (E. coli [KACC 10005] and S. typhimurium [KCCM 40253]) and two Gram-positive bacterial strains (Bacillus subtilis [KACC 14394] and Enterococcus faecalis [KACC 13807]) to determine the antibacterial activity of cystamine-conjugated GO.25 LB was used as the diluent for both bacterial strains. Inoculates were prepared by suspending cells in sterile LB for 12 hours. Cystamine-conjugated GO and standards were placed in 96-well plates and 107 colony forming unit (CFU)/mL of cells were inoculated so that the final volume in each microwell was 0.2 mL. The plates were incubated at 35°C for 24 hours and absorbance read at 590 nm using a microplate reader. Minimum inhibitory concentrations (MIC) values were determined both before and after incubation.

Under acidic conditions, FT-IR did not show any carbonyl peak at 1,680 cm−1, indicating that there was no cystamine conjugated with GO. We assumed, therefore, that cystamine was oxidized under the basic pH (8.5) conditions used in this study resulting in redox reactions and the conjugation of cystamine to GO.

It is well known that unconjugated GO has bactericidal activity. In the current study, a strong biological effect against micro-organisms was always found with cystamine-conjugated GO (Figure 2B). Such nanoparticles interact with cells via disulfide bonds (S-S) and produce ROS. Therefore, we also performed a toxicity study with the SCC7 cell line. The results from the cytotoxicity tests indicated that cystamine-conjugated GO caused a dose-dependent decrease in cell viability (Figure 3A).

The stability of nanomaterials in a dispersed state is a major obstacle for their use in biomedicine.26 The zeta potential of cystamine-conjugated GO, and GO in an aqueous dispersion, were measured and found to be −19.2 and −49.4 mV, respectively. GO has a negative zeta potential due to the ionization of edge carboxylic groups. Our data are thus consistent with previous studies.30 The observed zeta potential of cystamine-conjugated GO was expected because colloidal stability within −25 to +25 mV is indicative of its stability when dispersed.27

There is extensive ongoing research designed to expand our knowledge on the roles of oxidative stress and its mediators in human diseases such as atherosclerosis, cardiovascular diseases, diabetes, cancer, and neurodegenerative disorders. In the current study, we found an increased production of ROS in the functionalization of cystamine-conjugated GO, and demonstrated that this material exhibits good antibacterial activity against two different Gram-positive, and two different Gram-negative bacteria. In order to elucidate the mechanism of ROS production, additional studies are needed. Nevertheless, these results suggest that cystamine-conjugated GO will have an important role in the field of biomedicine.

This work was supported by the GRRC program of Gyeonggi Province (GRRC Gachon 2013-B04, Development of Microfluidic Chip for Diagnosing Diseases).