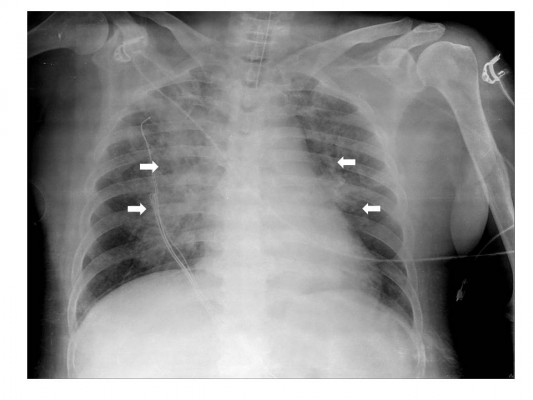 Abstract: Postoperative negative pressure pulmonary edema (NPPE) is a rare, but well-known life-threatening complication of acute upper airway obstruction (UAO) which develops after general anesthesia. The pronounced inspiratory efforts following UAO lead to excessive negative inspiratory pressure, which may cause acute pulmonary edema. Early recognition and prompt treatment of NPPE is necessary to prevent patient morbidity and mortality. In addition, the physician should carefully manage the patient who has risk factors of UAO to prevent this situation. We experienced a case of NPPE following laryngospasm after tracheal extubation in an obese patient who underwent open reduction of orbital wall and nasal bone surgery.

Postoperative negative pressure pulmonary edema (NPPE) is a rare but well described and life-threatening complication with a multifactorial pathogenesis with an incidence of approximately 0.05%–0.1% involving intubation and general anesthesia.1 Frequently, NPPE results from laryngospasm or other causes of acute upper airway obstruction (UAO).2 The pronounced inspiratory efforts following UAO lead to excessive negative inspiratory pressure, which may cause acute pulmonary edema.2 We experienced a case of NPPE following laryngospasm after tracheal extubation in an obese patient who underwent open reduction of orbital wall and nasal bone surgery.

A 66-year-old obese female (height 160 cm, weight 68 kg, body mass index of 26.5) with a medical history of hypertension and diabetes mellitus type 2 was admitted for reduction of fracture of orbital wall and nasal bone surgery under general anesthesia. Preoperatively, her physical examination, including airway, was unremarkable and vital signs were stable. Propofol 120 mg and rocuronium 50 mg were administered intravenously to induce general anesthesia and endotracheal intubation using a 7.0 mm internal diameter endotracheal tube was performed at once smoothly. Initial peak pressure was 28 mmHg on volume controlled mandatory ventilation with tidal volume 450 mL, respiratory rate 11 breaths/min, and positive end-expiratory pressure 5 mmHg. The anesthesia was maintained with sevoflurane 2–2.5 vol% and remifentanil plasma concentration of 2–3 μg/mL. The intraoperative course was stable and 800 mL of crystalloid was administered intravenously during the operation. At the end of surgery, administration of sevoflurane and remifentanil was discontinued and a neuromuscular blockade was reversed with pyridostigmine 15 mg and glycopyrrolate 0.4 mg. When the patient regained consciousness and opened her eyes on verbal command, the endotracheal tube was removed after suctioning the sputum in the mouth and trachea. After extubation, her vital signs were stable. Within 5 minutes after extubation, however, she had a sudden onset of productive cough with blood tinged sputum and developed severe respiratory distress. As acute UAO following laryngospasm was suspected, the manually controlled positive pressure ventilation using a face mask and oropharyngeal airway was provided, but the SpO2 saturation gradually decreased from 99% to 63%. Therefore, she was re-intubated with intravenous administration of propofol 50 mg and rocuronium 50 mg. At the time of re-intubation we found that her vocal cords were slightly edematous. In addition, a small quantity of blood tinged secretion was suctioned through the endotracheal tube. In a few seconds after re-intubation, a lot of pinkish, frothy secretion came out of the endotracheal tube. Auscultation of the lungs revealed bilateral coarse crackles. Arterial blood gas analysis showed pH 7.19, PaCO2 75 mmHg, PaO2 71 mmHg, and SaO2 89% with FiO2 1.0. Based on the assumption of NPPE, furosemide 20 mg was administered and her ventilation was supported by pressure assisted controlled mandatory ventilation with positive end-expiratory pressure 10 mmHg. Ten minutes after re-intubation chest X-ray showed diffuse interstitial and alveolar infiltrates (Figure 1).

She was admitted to the intensive care unit (ICU). At the first postoperative day (POD) a chest computed tomography (CT) scan revealed interlobular septal wall thickening and patchy ground glass opacity in both upper lobes (Figure 2). Electrocardiography and the level of cardiac biomarkers such as cardiac troponins and CK-MB were normal. At the third POD, plain chest X-ray showed the resolution of pulmonary edema (Figure 3) and the patient was extubated. Arterial blood gas analysis showed pH 7.5, PCO2 33.6 mmHg, PaO2 86.7 mmHg, and SaO2 97.4% during oxygen supply with nasal cannula at a flow rate of 4 L/min. She was discharged from ICU at the seventh POD without any complication.

NPPE is a rare, but potentially disastrous complication following extubation after general anesthesia. Postoperative NPPE occurs in 12% of patients with UAO.3 Numerous causes including laryngospasm, foreign body, soft tissue edema, hematoma, obesity, obstructive sleep apnea syndrome, secretion and blood in the throat, oral and maxillofacial surgery, and delayed recovery of anesthesia and muscle relaxant may lead to UAO after surgery. Laryngospasm is a closure of vocal cord resulting in breathing difficulty. Approximately 50% of adult patients with NPPE were associated with laryngeal spasm.4

NPPE is a noncardiogenic pulmonary edema. The pathophysiology of NPPE is complicated. Inspiratory effort to overcome UAO can generate extremely negative intrathoracic pressure, resulting in increased blood flow into the pulmonary vasculature favoring hydrostatic transudation of fluid into the interstitial and alveolar space.1,5

The symptoms of NPPE frequently occur immediately after extubation although delayed onsets have been reported.1 Initial clinical findings of NPPE include hypoxemia, pinky frothy sputum, pulmonary rales, and shortness of breath. Chest X-ray after re-intubation showed bilateral diffuse interstitial and alveolar infiltrates, suggestive of pulmonary edema. In addition, chest CT section displayed bilateral diffuse patchy areas of ground glass attenuation (edema/hemorrhage), predominantly in the central and nondependent regions, consistent with NPPE. In the present case, we presumed that NPPE was associated with laryngospasm. The patient had paroxysmal coughing and blood tinged sputum within a few minutes after extubation. A small amount of blood tinged secretion was suctioned from the endotracheal tube shortly after re-intubation. Laryngospasm can be triggered by stimuli in the throat such as blood, secretion, gastric juice, foreign body, cold temperature, and infection. In addition, our patient had risk factors associated with airway obstruction including obesity and nasal surgery.

The prompt diagnosis and treatment of NPPE is essential to prevent fatal complications such as adult respiratory distress syndrome and death.6 The most important principles of NPPE treatment are prompt relief of the airway obstruction and early application of positive pressure ventilation. In addition, unless the patient is hypovolemic, diuretics can be used, but their effects are unclear.7 Positive pressure ventilation with a bag-valve mask is often effective to relieve laryngospasm, but in some cases, controlled mechanical ventilation via orotracheal intubation is required to maintain airway patency and prevent hypoxemia.

The prevention of postoperative laryngospasm is very important to decrease the incidence of NPPE. To reduce the laryngeal irritation topical lidocaine laryngotracheal anesthesia and careful oropharyngeal suctioning are recommended.8 Prophylactic continuous positive airway pressure has also been suggested in at-risk patients.9

NPPE is an uncommon but well described complication after general anesthesia. Early recognition and prompt treatment of NPPE is necessary to allow rapid resolution of the condition and prevent patient morbidity and mortality. In addition, the physician should carefully manage the patient who has risk factors of UAO to prevent this situation.

This case was approved by Institutional Review Board of Kyungpook National Hospital for the use of data in the present study. Patient consent was obtained for the publication of this article.