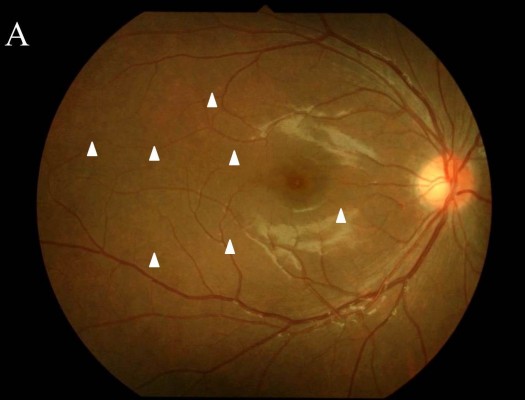 Multiple evanescent white dot syndrome (MEWDS) is a unilateral chorioretinitis characterized by multiple small subretinal white dots extending from the posterior pole to the midperiphery, spontaneous resolution of the white dots within several weeks, and good visual prognosis, which has a propensity to affect young, myopic females.1,2 Spectral-domain optical coherence tomography (SD-OCT) revealed temporary impairments in outer retinal morphology that were restored together with improvements of visual function,3,4 indicating that outer retinal impairments mediate the visual function loss in patients with MEWDS. Moreover, our recent study with laser speckle flowgraphy revealed that choroidal blood flow velocity at the lesion area significantly increased with regression of MEWDS, and there was a correlation between the blood flow and visual functions,5 suggesting a close link between choroidal circulatory disturbance and the pathogenesis of MEWDS. However, there were a few reports regarding the inner retinal abnormalities on MEWDS.

Using SD-OCT C-scan, we demonstrated recently a subclinical increase of macular inner retinal layers together with a decrease of outer layers in the acute phase of MEWDS eyes.6 Similarly, Akiyama et al7 reported that thickness of the ganglion cell layer and inner plexiform layer at the macula thinned with the regression of MEWDS. However, the pathogenesis of the inner layer thickening is still unknown, although complicated retinal phlebitis has been speculated as the reason.1,6,8 We herein report two cases with MEWDS, whose funduscopy showed obvious retinal vasculitis.

Our institute’s Review Board does not require approvals or patient consent for these case reports.

A 27-year-old woman with mild myopia presented with blurred vision and photopsia of the right eye for 2 weeks. She had no particular medical or ocular histories.

The patient’s best-corrected visual acuity (BCVA) was 1.0 OD (oculus dexter) and 1.5 OS (oculus sinister). Relative afferent pupillary defect was negative. There were no abnormal ocular findings OS. Slit-lamp examination revealed no inflammation in the anterior chamber or vitreous. Funduscopic examination showed multiple, faint, subretinal white dots at the posterior pole to the equator and macular granular change (Figure 1A and B, arrowheads). In addition, retinal vascular sheathing was observed at the midperiphery (Figure 1B, arrows). Fluorescein angiography (FA) showed hyperfluorescence continuing from the initial phase corresponding to the white dots (Figure 1C, arrowheads) and the staining of the optic disk. The retinal sheathing sites showed vascular staining with leakages in the late-phase OD (Figure 1C, arrows). Indocyanine green angiography showed no abnormal appearance in the initial phase and multiple hypofluorescence at the wider area than the white dots (Figure 1D, arrowheads). Enhanced depth imaging optical coherence tomography (EDI-OCT) revealed the discontinuity of the ellipsoid zone at macular area OD (Figure 1E, arrows) and that the subfoveal choroidal thickness (SCT) was 295 μm. Humphrey perimetry (30-2 Swedish threshold interactive algorithm standard test) showed a mild blind spot enlargement OU (oculus uterque) (mean deviation [MD] value: −1.83 dB OD and −1.08 dB OS). Multifocal electroretinography (mfERG) showed entirely decreased amplitude, except normal central amplitude OD, and mildly decreased amplitude at the retinal site that corresponded to the peripapillary area OS. Infection screening, including tuberculosis, syphilis, human T-cell leukemia virus type 1, and toxoplasmosis, showed negative results on QuantiFERON and serological testing or with antibodies for these agents. The chest X-ray was normal and serum angiotensin-converting enzyme was within normal limit. The patient received a diagnosis of MEWDS OD and was followed up with no treatment. One month after the first visit, the white dots and retinal vascular sheathing spontaneously resolved. After 3 months, the ellipsoid zone at the macula restored and the SCT decreased to 237 μm, together with increased BCVA of 1.5 OD (Figure 1F). On Humphrey perimetry, the MD value improved to −0.28 dB OD and −0.69 dB OS.

A 16-year-old woman with mild myopia complained of blurred vision and photopsia of the right eye for 1 month. The patient had no particular medical or ocular histories.

Her BCVA was 1.2 OU. Relative afferent pupillary defect was negative. Left eye was normal. Slit-lamp examination revealed no cells in the anterior chamber, but mild anterior vitreous cells OD. Funduscopic examination showed multiple, faint, small, subretinal white dots at the posterior pole to the midperiphery (Figure 2A and B, arrowheads), macular granularity, and retinal vascular sheathing at superotemporal midperiphery (Figure 2B, arrows). On FA, the hyperfluorescence was seen from the initial phase corresponding to the white dots (Figure 2C, arrowhead), with the staining of the optic disk and vascular leakages corresponding to the retinal vascular sheathing on the late phase (Figure 2C, arrow). On late-phase indocyanine green angiography, multiple spots of hypofluorescence were observed at the wider area despite no initial abnormal findings (Figure 2D, arrowheads). EDI-OCT revealed segmental loss of the ellipsoid zone at areas of the white dots (Figure 2E, arrows), and the SCT was 341 μm. Goldmann perimetry showed a mild blind spot enlargement of 5×10 degree OD and no abnormality OS. On Humphrey perimetry, MD value was −5.47 dB OD, and OS was unmeasured. In mfERG, entirely decreased amplitude except central normal amplitude was present OD, and the result was normal OS. Systemic screening, similar to what was done for Case 1, showed negative results. She was diagnosed as having MEWDS OD and was followed up with no treatment. One month later, white dots and retinal vasculitis spontaneously disappeared. Three months after the initial visit, the ellipsoid zone at the macula restored and the SCT decreased to 319 μm (Figure 2F). The BCVA remained unchanged. Twelve months after the initial visit, the MD value improved to −0.24 dB OD. Thereafter, there were no recurrences of MEWDS during follow up.

Uveitis complicated with retinal vasculitis was considered as the differential diagnosis for our two cases. Sarcoidosis was eliminated based on the normal level of serum angiotensin-converting enzyme, normal chest X-ray, and the absence of anterior chamber inflammation. Uveitis associated with tuberculosis, syphilis, human T-cell leukemia virus type 1, and toxoplasmosis were also differentiated from the negative results on serological test or antibodies for these agents. Based on our funduscopic findings, there might be a possibility that subretinal white dots existed along with retinal vessels accidentally. However, with FA, we detected the apparent evidence of retinal vasculitis corresponding to the retinal sheathing sites.

MEWDS eyes were reported to exhibit retinal periphlebitis, which was detected on FA in some cases,1,6,8 suggesting the involvement of inflammatory processes in the inner retina. These observations and our present results suggest that an increase of inner retinal layers in acute stage of MEWDS, as showed by our recent study,6 is due to accompanying retinal vasculitis. In our study examining inner retinal layer thickness of eight MEWDS eyes, indeed, only one case in which retinal phlebitis was detected on FA exhibited the maximal change in the inner retinal thickness during the course of the study, compared to those with no retinal vasculitis (data not shown).6 Two possibilities are considered as the cause of associated retinal vasculitis in MEWDS eyes; one is that inflammation extended from the outer layers to the inner layers, and the other is that vasculitis simultaneously occurs in inner layers apart from the inflammation in outer layers. Functionally, macular focal ERG revealed the significant reduction of not only a-wave but also b-wave and oscillatory potentials (OPs) in MEWDS eyes, and OPs were still reduced despite recovery of visual function and a- and b-waves during the course.9 Using mfERG, Cheng et al10 also observed reduced mfOPs in MEWDS eyes compared to the response from the fellow eyes, even in areas of the normal-appearing retina. Moreover, one patient showed attenuation of mfERG responses following mfOPs reduction.10 Morphologically, EDI-OCT showed abnormal hyperreflective lesions at ganglion cell layer in a MEWDS case with focal choroidal excavation.11 These observations suggest that the inner retinal layer changes in MEWDS occur independently with the outer layer abnormalities. Further studies are needed to investigate the relationship between MEWDS and retinal vasculitis.

In both of our cases, FA showed not only retinal vasculitis, but also the staining of the optic disk, suggesting that inflammation might extend to the optic disk as well. However, both cases involved negative relative afferent pupillary defect and decreased responses corresponding to the retinal sites with visual field defects on mfERG. These results and the abnormality of the ellipsoid zone that was observed at the acute stage suggest that the visual field impairment in these cases was caused by the outer retinal disorder but not by optic nerve involvement.

Two cases with MEWDS involved funduscopically obvious retinal vasculitis. These results may support the previous observation that showed an increase of inner retinal layer thickness in the acute stage of MEWDS, although further studies with a larger number of patients are needed to investigate the relationship between the inner retinal disturbance and retinal vasculitis in MEWDS.