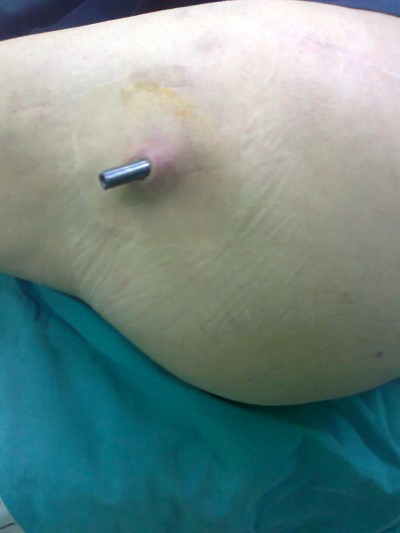 Background: This study aims at assessing the clinical results, radiographic findings, and associated complications after osteosynthesis of trochanteric hip fractures with proximal femoral nail (PFN).
Methods: A total of 152 patients with hip fractures who underwent osteosynthesis with PFN were included. The hip fracture types in the patients included in the study were classified according to the American Orthopedic/Orthopedic Trauma Association (AO/OTA). AO/OTA A1, A2, and A3 type fractures were found in 24 (15.8%), 107 (70.4%), and 21 (13.8%) patients, respectively. The Baumgaertner scale was used to assess the degree of postoperative reduction. The Salvati–Wilson hip function (SWS) scoring system was used to evaluate functional results. After a follow-up period, clinical and radiographic results were evaluated and complications were assessed. The relationship between the complications and SWS score, age, sex, fracture type, reduction quality, and time from the fracture to surgery was evaluated.
Results: Eighty-five (55.9%) female patients and 67 (44.1%) male patients were enrolled in the study. Seventy-nine (51.9%) patients had left hip fractures, and 73 (48.1%) had right hip fractures. The mean age was 76 (range 21–93) years, and the mean follow-up duration was 23.6 (range 7–49) months. Postoperatively, one patient (0.6%) had a poor reduction, 16 patients (10.5%) had an acceptable reduction, and 135 patients (88.9%) had a good reduction according to the above criteria. The SWS scores were excellent, good, moderate, and poor in 91 (59.8%), 45 (29.6%), 15 (9.8%), and one (0.6%) patients, respectively. Late postoperative complications were seen in 27 patients (17.7%). A total of 14 patients (9.2%) underwent a revision procedure for mechanical complications.
Conclusion: The study results suggest that the quality of fracture reduction is an important factor that affects the revision rate and SWS score in patients with mechanical complications after osteosynthesis with PFN for trochanteric fractures.

Trochanteric femoral fractures are often seen in patients aged >65 years; they can be caused by high-energy or low-energy trauma or may be pathological in nature.1–4 Particularly in the elderly, hip fractures are a major cause of increased mortality and morbidity.4,5 Because of the decreased physical capacity, concomitant systemic diseases, and increased vulnerability to environmental dangers, even low-energy trauma can cause unstable femoral trochanteric fractures in this age group.5–7 Surgical management of hip fractures is targeted to help patients recover to the closest degree of functionality they had prior to the trauma; this is achieved by utilizing the most appropriate treatment methods and early ambulation, thereby preventing potential complications.6,8

Fractures involving the trochanteric area of the proximal femur are classified according to the American Orthopedic/Orthopedic Trauma Association (AO/OTA) classification system as AO/OTA 31-A, which delineates them as extracapsular fractures of the hip. These fractures are then subdivided into groups A1, A2, and A3. Simple, two-part fractures are classified as A1 fractures, whereas A2 fractures have multiple fragments. More complex fractures, including reverse oblique and transverse fracture patterns, are classified as A3.9 The current approach for fractures involving the intertrochanteric region is to initially perform an anatomical reduction and then stabilize the fracture with rigid fixation.10 Cephalomedullary nails, such as the gamma nail and proximal femoral nail (PFN), are the preferred implants in proximal extracapsular femoral fractures (AO/OTA 31-A).2,8,10,11 Compared with other implants, cephalomedullary nails provide biomechanical advantages because of their shorter lever arms and decreased deformity forces.2,7,8,10 They are the acceptable and preferred implants in the treatment of proximal femoral fractures, specifically because they allow for a closed reduction procedure.2,8,11–13 In addition, intramedullary fixation is associated with decreased soft tissue trauma, decreased blood loss, and lower rates of infection and wound complications.2,8,11,12 A meta-analysis by Ma et al14 reported less blood loss and shorter length of hospital stay with proximal femoral nail antirotation (PFNA). Also, they found no significant difference in the rate of fixation failure between the gamma nail and PFNA or dynamic hip screw (DHS). Similarly, Shen et al15 reported less blood loss and fewer complications in the PFNA group when compared to DHS group.

On the other hand, various complications may develop in the intraoperative and postoperative periods with the use of PFN.1,3,8,10,12,16–20 The potential late complications may include neck screw cutouts, nonunion, Z-effect, reversed Z-effect, secondary varus deformity, thigh pain due to iliotibial tract irritation, and fracture development near the distal aspect of the nail.

This study evaluates the clinical results, radiographic findings, and associated complications in patients who underwent osteosynthesis with PFN for fracture of the proximal femur.

The mean time from hip fracture to osteosynthesis with PFN was 3.75 (range 1–13) days, and titanium alloy PROFIN PFN® nails (TST Medical Devices, Istanbul, Turkey) were used. Surgery was performed under spinal anesthesia using fluoroscopy-guided closed reduction on a traction table. All patients were ambulated on the first day after surgery with partial weight-bearing according to their pain tolerance levels. The mean duration of hospital stay was 6.05 (range 1–24) days. Postoperative reduction was assessed using the Baumgaertner et al’s scale.21 Functional results were evaluated using the Salvati and Wilson assessment score (SWS)22 (Table 1). After the follow-up period, clinical and radiographic results were evaluated and the complications were assessed. Intraoperative complications were excluded. Late complications, including implant cutout, Z-effect, reverse Z-effect, calcification of the tip of the greater trochanter, femoral neck shortening, nonunion, malunion, cortical thickening at the distal locking region, broken locking screw, broken PFN, and diaphyseal femoral fractures, were considered during radiographic assessment. The relationship between the complications and SWS score, age, sex, fracture type, reduction quality, and time from fracture to surgery was evaluated. This study was conducted in accordance with the ethical guidelines of the Declaration of Helsinki and informed written consent was obtained from all the patients. The protocol was reviewed and approved by the Institutional Review Board of İzmir Bozyaka Training and Research Hospital, İzmir, Turkey (No. 16.03.2011-34).

The initial postoperative radiographic assessment revealed that reduction was poor in one patient (0.6%), acceptable in 16 patients (10.5%), and good in 135 patients (88.9%). The SWS scores were excellent, good, moderate, and poor in 91 (59.8%), 45 (29.6%), 15 (9.8%), and one (0.6%) patients, respectively. No pulmonary embolism or deep vein thrombosis, or no urinary tract infection or deep surgical site infection were observed in our study. Superficial incision site infection was observed in two (1.3%) patients. Infection resolved with antibiotic therapy and wound care.

Femoral head screws were removed in four patients (2.6%). They were removed in two patients (1.3%) with Z-effect and secondary varus deformity – one patient (0.6%) had implant cutout and the other patient (0.6%) had reverse Z-effect and secondary varus deformity. Among these four patients, two (1.3%) underwent partial hip arthroplasty.

The SWS score was not significantly associated with the fracture type, age, sex, and time from fracture to surgery (P=0.051, P=0.628, P=0.608, and P=0.462, respectively). A postoperative SWS score of very good correlated with an excellent reduction in the early postoperative stage. We found a significant association between SWS score and reduction quality (χ2=35.446, P=0.000).

In a series of 191 fractures, Simmermacher et al20 reported an overall technical failure rate of 4.6%. In another study including 178 patients, Appelt et al1 reported a complication rate of 15.2% (n=27). In a case series including 47 peritrochanteric fractures, Fogagnolo et al2 found mechanical failures in 23.4% patients (n=11). In another case series including 80 patients, Akan et al13 observed technical complications in 10% patients (n=8). In a prospective study including 55 patients treated with PFN, Boldin et al24 reported a complication rate of 21.8% patients (n=12). Similar to the previous findings, our study showed that the rate of late complications following surgery was 17.7% (27 patients).

In addition, PFN-related secondary varus deformities may occur in 0.8%–8.6% patients.8,10,11,16,19 Consistent with the published literature, our study found PFN-related secondary varus deformities in 8.5% of the patients (13 patients). According to the AO classification, among these 13 patients, nine patients had type A2 and four patients had type A3 fractures.

Furthermore, malpositioning of screws or placement of screws with an inappropriate size may lead to cutout from the femoral head.3,10,11,16,17 Several studies have reported a cutout rate of 2%–8%.3,7,8,11,13–18,24 We observed a cut-out complication in four patients (2.6%). Two of them underwent partial hip arthroplasty, whereas the remaining two underwent total hip arthroplasty.

As a result, PFN is a relatively easy-to-use and effective device in the treatment of unstable trochanteric femoral fractures.2,8,11,12,29 It enables early postoperative ambulation with a biomechanically stable structure.2,11 In addition to using an appropriate implant, adequate reduction quality, proper implant insertion, and the experience of the surgeon play a key role in the successful osteosynthesis for trochanteric fractures.1,8,29–31 Windolf et al29 reported that the major causes of poor outcomes included poor fracture reduction and the use of an inappropriate screw. Osteosynthesis with PFN is a safe method for simple trochanteric fractures with excellent bone quality; however, PFN may not be the preferred method of fixation for complex fractures in patients with poor bone quality.1 In our study, poor reduction was significantly associated with increased mechanical failure and revision rates. However, the fracture type was not significantly associated with mechanical failure.

This study has some limitations. First, there is no control group, including an alternative treatment modality other than PFN. Second, we were unable to investigate the effects of comorbidities such as cognitive status, health status, and activity level, all of which may likely affect the outcomes. The preoperative comorbid factors can have influence on the development of mechanical complications. Third, PFN implants from diverse manufacturers can also have influence on the development of mechanical failure.

In conclusion, the quality of fracture reduction is an important factor that affects the revision rate and SWS score in patients with mechanical complications after PFN was used for trochanteric fractures.