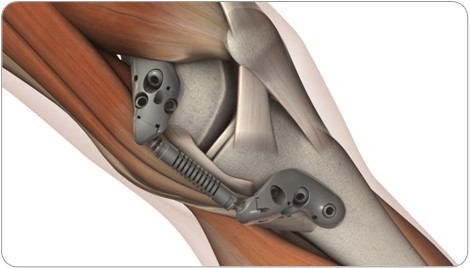 
Background: Knee osteoarthritis (OA) is largely attributable to chronic excessive and aberrant joint loading. The purpose of this pilot study was to quantify radiographic changes in subchondral bone after treatment with a minimally invasive joint unloading implant (KineSpring® Knee Implant System).
Methods: Nine patients with unilateral medial knee OA resistant to nonsurgical therapy were treated with the KineSpring System and followed for 2 years. Main outcomes included Western Ontario and McMaster Universities Osteoarthritis Index (WOMAC) pain, function, and stiffness subscores and independent core laboratory determinations of joint space width and fractal signature of the tibial cortex.
Results: WOMAC scores, on average, improved by 92% for pain, 91% for function, and 79% for stiffness over the 2-year follow-up period. Joint space width in the medial compartment of the treated knee significantly increased from 0.9 mm at baseline to 3.1 mm at 2 years; joint space width in the medial compartment of the untreated knee was unchanged. Fractal signatures of the vertically oriented trabeculae in the medial compartment decreased by 2.8% in the treated knee and increased by 2.1% in the untreated knee over 2 years. No statistically significant fractal signature changes were observed in the horizontally oriented trabeculae in the medial compartment or in the horizontal or vertical trabeculae of the lateral compartment in the treated knee.
Conclusion: Preliminary evidence suggests that the KineSpring System may modify knee OA disease progression by increasing joint space width and improving subchondral bone trabecular integrity, thereby reducing pain and improving joint function.

Osteoarthritis (OA) of the knee is a leading cause of disability in adults that is attributed, in large part, to chronic excessive and aberrant joint loading.1 Despite the recent concerted effort to develop disease modifying OA drugs, none have been shown to alter the natural history of knee OA in human clinical trials. According to the Osteoarthritis Research Society International/Outcome Measures in Rheumatology Initiative,2 pain, functional impairment, and radiographic progression should comprise the key endpoints in trials intended to evaluate potential disease-modifying therapies. To date, there is no known treatment for knee OA that has consistently reported benefit for each of these disease modification characteristics.2

Mounting evidence suggests that minimally invasive joint unloading implants have clinical utility in patients who have unsuccessfully exhausted nonsurgical knee OA therapies, but who are ineligible or unwilling to undergo arthroplasty. Data from several clinical studies have reported that these implants provide durable and clinically meaningful improvements in knee pain and function.3–7 However, none of these studies have reported longitudinal radiographic changes in the knee following implant. While disease progression is frequently assessed by quantifying intraarticular cartilage loss, changes in subchondral bone also play a key role in the pathogenesis of knee OA.8 In fact, subchondral bone trabecular integrity has been shown to be a strong predictor of disease progression.9 Fractal signature analysis (FSA) assesses the complexity of detail in a two-dimensional image (ie, radiograph) to yield a value representative of trabecular number, spacing, and cross-connectivity.10 The purpose of this pilot study was to quantify clinical outcomes and radiographic changes occurring in the knee joint 2 years following treatment with a joint unloading implant, with special emphasis on subchondral bone characteristics quantified by FSA.

Continuous data were reported as median (interquartile range [IQR]), and categorical data were reported as frequencies. Longitudinal changes in clinical outcomes were assessed with the Wilcoxon signed rank test. Fractal signature data were analyzed using the methods of Kraus et al.9,16 Briefly, morphology of vertically and horizontally aligned trabeculae was assessed by quantifying the fractal dimension across a range of radii, representing trabeculae from 0.4 to 3.0 mm in thickness. Quadratic multiple regression using a noncentered polynomial was applied to model data for each patient, which accounted for differences in pixel width among radiographs. Pretreatment and 2-year radiographs were analyzed using area under the curve methodology.17 Due to the pilot nature of this study, a one-sided P-value <0.1 was considered statistically significant.18 The sample size was selected to provide 80% power to detect a minimum standardized pre–post effect size ≥0.80 (PASS 2013, Kaysville, UT, USA). Data were analyzed using IBM SPSS Statistics (version 22; IBM Corp., Armonk, NY, USA).

Of the 40 patients enrolled in the COAST study, nine patients (five males) with complete clinical and radiographic data at 2 years were randomly selected for inclusion in this pilot study. Median patient age was 53 years (IQR: 48 to 58 years) with body mass index of 30 kg/m2 (IQR: 28 to 33 kg/m2) (Table 1). Clinical and radiographic disease severity of these patients were comparable to patients undergoing total knee arthroplasty.19,20

Statistically significant improvements were observed in all WOMAC scores 2 years following implant with the KineSpring® System. Median WOMAC scores improved 92% for pain, 91% for function, and 79% for stiffness (all P<0.01) over the 2-year follow-up period (Figure 4). All patients exceeded the threshold for clinical success in each WOMAC domain, defined as a ≥20% improvement from baseline.21

OA progression is largely mediated through failed attempts at subchondral bone and cartilage repair secondary to excessive mechanical loading at the knee joint. Over time, repetitive impulse loading causes microfractures to develop in the subchondral endplate, resulting in local osteoporosis, subchondral sclerosis, and subsequent cartilage degeneration.22–24 OA progression can be visualized and quantified as thinning and fenestration of vertical trabeculae due to stress shielding and hypomineralization.16

In this study, we observed the opposite phenomenon; that is, medial compartment unloading over 2 years with a minimally invasive implant modified subchondral sclerosis in vertically oriented trabeculae with concomitant increases in JSW in the medial knee compartment. The observed decrease in FSA area under the curve over 2 years is indicative of a less complex radiographic image, with reversal of thinning and fenestration of vertically oriented trabeculae. Fractal signatures of the horizontally oriented trabeculae were unchanged in the current study. This observation was not unexpected; vertical trabecular integrity has a strong relationship with OA progression while the relationship with horizontal trabecular morphometry is inconsistent.9,16,25,26

Interestingly, over 2 years, JSW in the medial compartment of the treated knee increased to approach the baseline JSW of the unaffected knee. These data further support the concept that knee OA progression may be modified when chronic biomechanical overloading forces are reduced.1 Regarding therapies intended to unload the knee joint, Waller et al state:

[…] if the pathological stress pattern across the joint is normalized, it has been hypothesized that extrinsic cells can induce repair by forming fibrocartilage, remodeling of the subchondral plate so a typical trabeculated pattern will ensue, regaining its shock absorption quality and joint space width will be reestablished.1

Studies of surgical joint distraction in patients with knee OA have reported similar findings, with sustained improvements in clinical outcomes, JSW, and cartilage thickness.27,28 The observation of decreased vertical FSA values, increased JSW, and clinically meaningful improvements in patient symptoms with the KineSpring System is supportive of these previous findings.

This pilot study was limited by a small sample size, which limits generalizability of results to the general population with knee OA. Therefore, the results are indeed promising but should not be considered conclusive. A matched control group that did not receive the joint unloading implant would provide more definitive evidence that the observed results were not attributable to confounding factors. Another limitation of this study was that a standardized imaging protocol was not used across study sites, which may introduce additional variability to the radiographic measures. A final limitation of this study was that only patients with available 2-year follow-up were selected for inclusion, which may introduce bias in the study outcomes. A notable strength of the study was use of semiautomated software to determine FSA values, which was used to reduce measurement variability compared to other fractal signature methods.29,30 Additional studies with larger sample sizes are needed to confirm the impact of the KineSpring System on radiographic indexes of knee OA progression.

This research was supported by Moximed, Inc.