Back to Journals » Infection and Drug Resistance » Volume 12 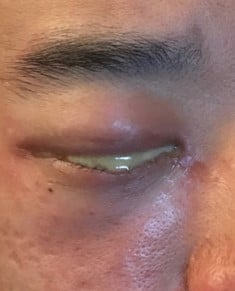 Abstract: Gonococcal conjunctivitis is due to ophthalmic infection with Neisseria gonorrhoeae, and it is considered rare in the non-neonatal populations, particularly its association with gonorrhea and chlamydial urethritis in the same patient. Here we describe a 27-year-old newly married man presenting gonococcal conjunctivitis and discuss the selection of antibiotic drugs associated with its course.

Gonococcal conjunctivitis (GC) is characterized by severe mucopurulent discharge associated with conjunctival injection, eyelid edema, tenderness, and often preauricular lymphadenopathy. This condition is due to ophthalmic infection with Neisseria gonorrhoeae and was considered predominantly a disease of neonates. In non-neonatal populations, GC is rare and usually associated with gonococcal urethritis (GU) and other sexually transmitted infections (STIs). Few reports have estimated the prevalence of GC; however, a recent study in Ireland showed that the prevalence of GC was 0.19 cases per 1000 patients evaluated for eye emergencies, with the majority of cases presenting in young adult males.1

GC in adults is generally thought to result from auto-inoculation of infected genital secretions through hand contact or contaminated towels from the patient or his/her partner. GC is often associated with STIs but can also present without evidence of concomitant genital infection,2 or present despite successful treatment of urethritis syndrome.3 GU and chlamydia are the most frequently reported STIs in developed countries, and concurrent treatment for chlamydia is now part of the recommended treatment regimen for GU.4,5 Antimicrobial resistance remains an important consideration in the treatment of gonorrhea. Here, we present a rare case of GC with improved urethritis after oral levofloxacin therapy, associated with an infection of urethral Chlamydia trachomatis.

A 27-year-old newly married man presented to the Dermatology department of our hospital with a two-day history of a profuse mucopurulent discharge from his right eye (Figure 1). He complained of progressive redness and swelling of the right eye, ocular discharge, and mild pain. An excess of polymorphonuclear leucocytes and Gram-negative intracellular diplococci were observed following a stained smear of the discharge performed by another ophthalmic hospital two days previously. He was therefore suspected of having a GC infection and was treated with norfloxacin (0.5%) ophthalmic ointment. However, he was still unable to open his right eye because of conjunctival chemosis and marked eyelid swelling. The patient reported symptoms including urethral discharge, and urinary frequency, urgency, and dysuria, when he went abroad for his honeymoon about 10 days previously. The symptoms of urethritis had alleviated after intermittent oral administration of levofloxacin for seven days.

Ophthalmic examination showed no corneal abnormalities by slit-lamp examination and fundoscopy was normal. Microbial culture of the conjunctival pus on chocolate agar revealed growth of N. gonorrhoeae, and susceptibility to ceftazidime and gatifloxacin, moderate susceptibility to levofloxacin, moxifloxacin, and gentamicin, and resistance to amikacin and ciprofloxacin. No other bacteria were cultivated. Genital examination showed mild redness and a small amount of genital discharge. The patient’s wife was also screened using the same test but on vaginal discharge and the results were negative. The patient confirmed that his wife was his only recent sexual partner and suggested that the infection may have been acquired from the airport toilet seats. A diagnosis of GC and GU was established for the patient. Urethral secretions were also collected for laboratory examination of Mycoplasma genitalium, C. trachomatis, and N. gonorrhoeae.

The patient was treated with 1 g of intravenous ceftriaxone once per day. Three days later, he showed significant clinical improvement with almost no urethral discharge and an obvious reduction of ocular discharge (Figure 2). Bacteriological reports of urethral pus showed the growth of C. trachomatis and N. gonorrhoeae. After treatment with intravenous ceftriaxone and 1 g of oral azithromycin once a day for seven days, his conjunctiva remained red and the ocular discharge had nearly disappeared. After subsequent visits, the treatment included one-week intravenous ceftriaxone and one-week oral ceftazidime, two-week oral azithromycin combined with one-month topical 0.5% erythromycin ointment three times a day. One month after the first consultation, the patient was completely cured with no clinical symptoms, negative microbiological tests, and no sequelae or drug-related side effects.

GC typically presents with severe unilateral eyelid swelling, conjunctival chemosis, and hyperacute purulent discharge, as was the case with our patient, and may be complicated by uveitis or severe keratitis, sometimes leading to corneal ulceration and scarring, or even severe complications such as visual impairment or blindness.6 The incubation period from N. gonorrhoeae exposure to ocular symptoms varies from 3 to 19 days.7 In our case, the symptoms of GC developed 10 days after the onset of urethritis in spite of an improvement in urethral symptoms after the intermittent treatment of oral levofloxacin. GC usually occurs as a result of direct contact with infected hands or towels after exposure to uncontrolled symptoms of urethritis, as occurred in our case. Whereas, GU is transmitted through unprotected sexual behavior. In recent years, there have been increasing reports about adolescents having oral sex without condom usage, especially among men who have sex with men (MSM).7,8 There is also evidence from a systematic review for the non-sexual transmission of infections via communal baths, shared towels, rectal thermometers, and care-giver hands.2 Our patient believed that his infection had been acquired from the airport toilet seats other than unprotected sexual transmission or MSM. Indeed, there is some case report level evidence to suggest that N. gonorrhoeae may be acquired from contaminated toilet seats.9 Individuals should therefore be vigilant about personal hygiene in public areas to avoid contamination and the potential spread of infectious diseases. Prompt and effective antimicrobial treatment can prevent infections from becoming more serious.

In our case, microbial culture of urethral pus showed the growth of C. trachomatis together with N. gonorrhoeae, while conjunctival pus revealed only N. gonorrhoeae. It is estimated that GU annually causes 108 million cases globally, which is just less than that of chlamydia.10 Interestingly it is reported that about 50% of the patients with gonorrhea are also infected with C. trachomatis.4 Even if C. trachomatis testing is negative, azithromycin is recommended for possible chlamydia infection together with ceftriaxone for gonococcal infection.7 Although in our case, microbial culture revealed that the bacteria were moderately susceptible to levofloxacin, the irregular use of levofloxacin resulted in a reduction in urethral secretions but the new emergence of a secondary eye infection. After topical application of norfloxacin ointment for 2 days, the ocular symptoms remained unchanged or even slightly worsened. After 3 days of intravenous ceftriaxone, the ocular purulent decreased but did not disappear. After systematic application of ceftriaxone for 7 days, the conjunctiva was still red, so clinical recovery had not been achieved. Although the Centers for Disease Control and Prevention currently recommends only a single dose of ceftriaxone for GC,7 our patient took a two-week course of dual therapy for GC with cephalosporin and azithromycin for chlamydia. For our patient, topical treatment alone was inadequate and unnecessary when systemic treatment was given.8 Since fluoroquinolone resistance has become a growing issue, it is no longer recommended for empiric treatment.7,11 Ceftriaxone resistance is rare but has also been recorded.11 It has been reported that insufficient penetration of some drugs such as cefixime and azithromycin in the conjunctiva may also result in the lack of a treatment effect.3 Longer treatment times may help to achieve better effects, and the course depends on the recovery of clinical symptoms.

In summary, we reported a rare case of GC secondary to chlamydial and gonococcal urethritis. Levofloxacin alone was not adequate to treat gonorrhea, and it is best to apply susceptible antibiotics on the basis of drug sensitivity tests. Timely and effective treatment of urethritis can prevent the occurrence of ocular complications. Topical treatment alone is inadequate to treat GC, and it is necessary to apply sensitive antibiotics at adequate dosages and durations to achieve clinical recovery.

The study protocol was approved by the Beijing Friendship Hospital Ethics Committee for Human Research (2019-P2-038-01). A written informed consent has been provided by the patient to have the case details and the accompanying images published.

10. . Global action plan to control the spread and impact of antimicrobial resistance in Neisseria gonorrhoeae; 2012:36. Available from: . .