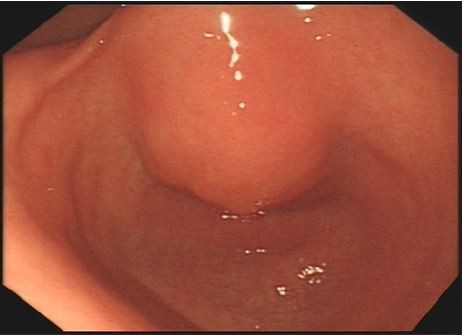 In November 2017, the patient was presented to our hospital again with abdominal pain. Subsequent abdominal enhanced CT examination showed the lesion occupying the lesser curvature of the gastric antrum, which was of size 3.6×2.8 cm (Figure 2). Gastroscopy showed chronic superficial gastritis and submucous eminent lesions in the lesser curvature of the gastric antrum (size 3.5×2.5 cm; Figure 3). Combined with the results of CT and gastroscopy, we diagnosed the patient with gastrointestinal stromal tumor (GIST). Then, we performed a fine needle aspiration (FNA) biopsy under endoscopic ultrasonography. The gastric metastasis was located in the intrinsic myometrium. H–E staining revealed the gastric metastasis of ovarian serous cystadenocarcinoma (Figure 4A and B). The serum CA125 level was 10.40 kU/L. The patient underwent pelvic enhanced CT examination and brain magnetic resonance imaging (MRI) examination, and no other metastases were found. Subsequently, laparoscopic resection of the gastric metastasis was accepted. Because the interval between the last chemotherapy was ~18 months, ie, the platinum-free interval (PFI) was >12 months,5 the patient underwent another eight cycles of adjuvant chemotherapy with carboplatin plus gemcitabine. The patient was reexamined after every two cycles of chemotherapy. The serum CA125 levels showed no elevation. She is currently in complete remission. Written informed consent has been provided by the patient to have the case details and any accompanying images published.

Ovarian carcinomas are mainly composed of three pathological types: epithelial cancer, malignant germ cell tumor, and sex cord stromal tumor. Among the three types, the incidence of epithelial cancer is the highest. In epithelial cancer, serous cystadenocarcinoma is the most common, accounting for ~75%–80% of all cases. The early clinical symptoms of ovarian serous cystadenocarcinoma are not obvious. The most common symptom is abdominal mass. Implantation metastasis is the main path of ovarian cancer. Epithelial ovarian cancer usually spreads along the peritoneum to the entire pelvic cavity, or even the abdominal cavity, and often metastasizes to the intestinal serosa, mesentery, and greater omentum, followed by local spread and lymph node metastasis. Ovarian cancer with hematogenous metastasis is very rare and usually metastasizes to solid organs, such as the liver, brain, lung, and bone. The central nervous system, skin, and pericardium are rarely metastasized.6 Even if gastrointestinal metastasis occurs, it is usually transferred from the outer serous layer to the inner.

Gastric metastasis from ovarian serous cystadenocarcinoma is extremely rare in the clinic.7 Ovarian cancer comprises only 0.013%–1.6% of all gastric metastatic tumors.8 The most frequent locations of occult metastatic disease from ovarian cancer are the omentum, the uterus, the fallopian tubes, the lymph nodes, the abdominal peritoneum, and the pelvic peritoneum.9 Although the mechanism of gastric metastasis remains unclear, it can be explained by the stomach receiving a rich supply of blood; so, it should be considered a possible target organ of metastasis. Clinical manifestations of gastric metastasis are nonspecific and include epigastric pain, melena, anemia, nausea, and vomiting. The patient was presented for abdominal pain in this case. A GIST was suspected in the present case based on the abdominal CT and gastroscopy. Kang et al10 reported one case of ovarian carcinoma with gastric metastasis that mimicked GIST. Similarly, in this present case, we misdiagnosed that the gastric lesion was GIST. After endoscopic ultrasonography-guided fine needle aspiration and pathological examination, it was diagnosed as ovarian cancer with gastric metastasis.

Gastric metastasis of ovarian serous cystadenocarcinoma is a rare event. Clinicians should nevertheless be aware that, in patients with a submucosal tumor and a history of ovarian cancer, gastric lesions may be secondary metastases from the ovarian cancer. For gastric metastatic lesions, laparoscopic resection is recommended when possible.