Expression of VEGF in human conjunctival melanoma analyzed with immunohistochemistry 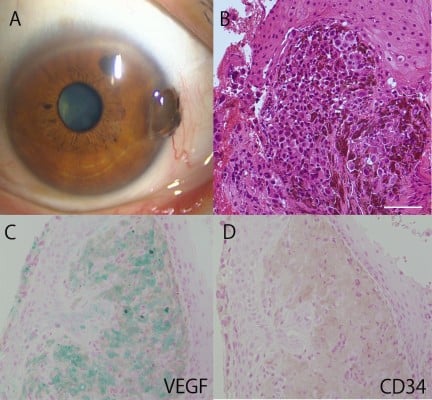 Purpose: The aim of this study was to examine the immunolocalization of VEGF-A and CD34, a marker of endothelial cells, in human conjunctival melanoma.
Methods: This study retrospectively analyzed primary conjunctival melanoma patients who underwent surgical resection of the tumor. All excised tissues were fixed with paraformaldehyde and embedded in paraffin, which were then submitted for immunohistochemistry with anti-VEGF and CD34 antibodies.
Results: The study sample comprised 4 female and two male melanoma patients. The age of the patients ranged from 64 to 84 (average age, 73) years. Histopathology of the surgically resected tumor tissues demonstrated accumulation of polygonal atypical malignant cells producing melanin. Cytoplasmic immunoreactivity for VEGF was clearly observed in tumor cells of all six tumors. In contrast, CD34-positive endothelial cells were less marked in the melanoma tissues than in the adjacent noncancerous subconjunctival stroma.
Conclusion: VEGF immunoreactivity was observed in conjunctival melanoma tissues, in which endothelial cells were hardly observed. These results suggest that although VEGF is expressed, conjunctival melanoma is a hypovascular tumor.

VEGF-A is a pleiotropic protein, which was historically identified as a tumor angiogenic factor. VEGF can be expressed and secreted from various tumor cells and the stroma, which stimulates endothelial cells and increases the number of microvessels in tumor tissues.4 The increased microvessels are considered to provide oxygen to the tumor tissue and allow the tumor cells to escape from apoptosis. Recent studies have proved that VEGF induced not only tumor angiogenesis and vascular permeability but also tumorigenesis, the latter of which might be independent of angiogenesis.4 It has been reported that cultured conjunctival melanoma cells express VEGF gene and protein;5 however, little is known about the expression of VEGF and the formation of microvessels in human conjunctival melanoma.

The aim of this study is to examine VEGF immunolocalization and microvessel density in human conjunctival melanoma.

This was a retrospective observational study. We enrolled patients with histology-proven primary conjunctival melanoma who had been treated in the Department of Ophthalmology, Hokkaido University Hospital, from March 2009 to November 2015, based on the medical records. The study sample comprised six patients who underwent local resection of tumor tissues. The tissues were resected with safety margins of 1–2 mm out of the elevated lesions based on no-touch technique.6 Patients with histology-proven conjunctival nevus and PAM were excluded from the study. Each tumor was classified according to TNM classification of the American Joint Committee on Cancer (AJCC), eighth edition. This study was approved by the institutional review board (IRB) of Hokkaido University (IRB number: 015-0062) and was conducted in compliance with the Declaration of Helsinki. The protocol was described in the website of the hospital, and subjects were provided with the opportunity to opt out, and therefore, no new consent was required from the patients.

The melanoma tissues were fixed with 4% paraformaldehyde immediately after surgical excision in the operating room. After the excised tumor tissues were embedded in paraffin, 5 μm-thick sections were cut. The slides were dewaxed, rehydrated, and rinsed in PBS twice for 10 minutes. Slides were submitted for H&E staining and immunohistochemistry. As a pretreatment for immunohistochemistry, microwave-based antigen retrieval was performed in 10 mM citrate buffer (pH 6.0) after demelanization by incubation with 1 g phosphoric acid in 100 mL of 3% hydrogen peroxide for 4 hours. These slides were immersed in 3% hydrogen peroxide for 10 minutes and then in normal goat serum for 30 minutes. Then, the sections were incubated with anti-VEGF (dilution 1:50, A-20; Santa Cruz Biotechnology Inc., Dallas, TX, USA) and anti-CD34 (dilution 1:50, M7165; Dako Japan Inc) antibodies at 4°C overnight. The secondary antibody reaction was carried out with anti-rabbit antibody (EnVision System HRP-labeled polymer; Dako Japan Inc) for 30 minutes at room temperature. Positive signals were visualized using HistoGreen (LINARIS; catalog number: E109) as a substrate. Slides were examined using a Keyence BZ-9000 (Keyence, Osaka, Japan) microscope. The tumor cells and the adjacent choroidal vessels of the enucleated eyes with choroidal melanoma7 served as a positive control of VEGF and CD34, respectively.

To evaluate VEGF expression, the number of tumor cells with cytoplasmic immunoreactivity was directly counted under light microscope at high magnification (objective ×40) in two or three fields in each section, which was then calculated as positive rate (%) of total tumor cells. Intratumoral microvessel density was calculated according to the previous reports.8,9 Briefly, the number of CD34-immunopositive microvessels in the tumor tissues was directly counted under light microscope (objective ×40). The counting was done in two or three high-power fields, and the numbers were then averaged to determine the microvessel density.

Table 1 summarizes the clinicopathological features of conjunctival melanoma patients examined in this study. The sample comprised four female and two male melanoma patients. The age of the patients ranged from 65 to 84 (average age, 74) years. Slit lamp examination demonstrated a blackish nodule in the conjunctiva (Figures 1A and 2A) in all the patients. Three tumors arose from PAM (Figure 2A), two from nevus (Figure 1A), and one from de novo. Histopathology of the surgically resected tumor tissues demonstrated accumulation of polygonal atypical malignant cells producing melanin (Figures 1B and 2B). Cytoplasmic immunoreactivity for VEGF was clearly observed as greenish coloration in a variety of conjunctival melanoma cells (Figures 1C and 2C). Four of the six cases showed a high VEGF-immunopositive rate of over 70% (Cases 1–4 in Table 1). In contrast, the other two cases (Cases 5 and 6 in Table 1) revealed a VEGF-immunopositive rate of about 30%, whereas none of the cases showed negative immunoreactivity for VEGF. In contrast, CD34-positive endothelial cells were less marked in the melanoma tissues (Figures 1D and 2D). Intratumoral microvessel density was less than one vessel/mm2 in every case examined, while a variety of CD34-positive blood vessels existed in the adjacent noncancerous subconjunctival stroma (Figure 2D).

Several authors have shown that VEGF is responsible for the tumor development and metastasis in patients with malignant melanoma.11–13 Recently, Wan et al demonstrated that genifitib, an inhibitor of epidermal growth factor, could suppress cultured melanoma cell proliferation through downregulation of VEGF gene and protein expressions.14 However, it remains unknown whether VEGF-driven angiogenesis affects the tumor growth of melanoma. Although it is well known that VEGF leads to angiogenesis in various solid tumors, VEGF also plays an important role in tumorigenesis, which cannot be associated with pathological neovascularization.4 Therefore, this study suggests that VEGF might be expressed during the tumorigenesis of human conjunctival melanoma, which is independent of tumor angiogenesis.

Recent studies have shown that VEGF is a promising therapeutic target for human diseases. In fact, bevacizumab and ranibizumab, two anti-VEGF agents, have been safely used for patients with neovascular age-related macular degeneration.15,16 Moreover, VEGF may hold a key to a novel therapeutic target for malignant melanoma. VEGF was certainly expressed in cultured uveal melanoma cells, and the cell growth was suppressed under bevacizumab and ranibizumab stimuli.17,18 Taken together, it is likely that anti-VEGF therapy can regulate not only neovascular diseases of the eye but also tumor cell proliferation in uveal melanoma cells. Corrie et al have shown that adjuvant anti-VEGF therapy (bevacizumab) contributed to improvement of disease-free survival in melanoma patients with a high risk of recurrence.19,20 In contrast, although anti-VEGF therapy might not be straightforward in contribution to regulation of primary uveal melanoma,21,22 these results suggest that anti-VEGF therapy might be considered one of the potential therapeutic strategies in patients with conjunctival melanoma.

There are limitations in this study. First, the number of samples examined is very small, since conjunctival melanoma is a rare malignant tumor in Japanese population, because of which, clinicopathological studies on this tumor have not progressed well. Second, although this study indicated that VEGF might play a role in tumorigenesis, VEGF expression could not be examined in premalignant lesions such as PAM and nevus. Further, molecular pathways regarding VEGF signaling are still uncertain. Therefore, further cell biological approaches are needed to examine VEGF receptors and the downstream molecular pathways in conjunctival melanoma as well as the premalignant lesions.