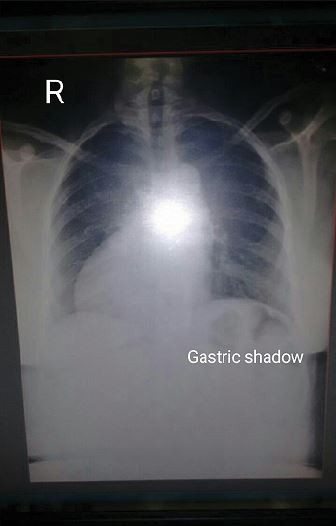 Abstract: Congenitally corrected transposition of great vessels (CCTGV) is a rare congenital heart disease (CHD) accounting for <1% of CHDs. CCTGV with infundibular pulmonary stenosis (PS) with ventricular septal defect (VSD) is part of Fallot’s physiology. It is known to be associated with bradyarrhythmias like atrioventricular (AV) blocks, and acquired complete AV block occurs at a rate of 2% per year. Patients can have left-sided accessory pathways, which may cause atrioventricular reentrant tachycardia (AVRT). Tachyarrhythmias like atrioventricular nodal reentrant tachycardia (AVNRT) are very rare in such patients. A 30-year-old woman, a known case of CCTGV with PS with VSD, not corrected surgically and not on any drugs, presented with the syndrome of paroxysmal supraventricular tachycardia without hemodynamic compromise. Electrocardiogram showed atypical AVNRT. She was pharmacologically cardioverted to normal sinus rhythm with adenosine. CTGV with PS with VSD known to be associated with AV blocks, and preexcitation can sometimes present with atypical AVNRT.

Congenitally corrected transposition of great vessels (CCTGV) is a rare congenital heart disease (CHD) accounting for <1% of all CHDs. It is characterized by double discordance – atrioventricular and ventriculoarterial – which physiologically corrects the discordance intrinsic to each malalignment.1 About 75% of patients have associated VSD, 75% have subpulmonary stenosis and 75% have left-sided Ebsteins’s-like valves.2 CCTGV with infundibular pulmonary stenosis (PS) with ventricular septal defect (VSD) forms part of Fallot’s physiology. Fallot’s physiology is a group of cyanotic CHDs associated with PS and VSD. Entities under Fallot’s physiology are said to be more common in patients with dextrocardia and situs solitus.3 CCTGV with PS with VSD is a rare cyanotic CHD constituting 0.8% of all CHDs. It is associated with bradyarrhythmias like atrioventricular (AV) blocks – first-degree AV block develops in 50% and complete AV block in 25% patients.4 Tachyarrhythmias like atrioventricular reentrant tachycardia (AVRT) can occur from the left-sided accessory pathways. But atrioventricular nodal reentrant tachycardia (AVNRT) in such patients is very rare. Unusual forms of AVNRT can occur in CCTGV in the context of 2 atrioventricular nodes, both of which have the opportunity for reentry using separate atrial connections. Both atrioventricular nodes can be connected by a Monckeberg sling and participate together in an atrial connection to either of the atrioventricular nodes.5

We report the case of a 30-year-old female, a known case of CHD, not corrected surgically or not on any drugs, who presented with sudden onset of palpitations and fatigue. She gave a 22-year long history of fatigue which had progressed from New York Heart Association (NYHA) class 1 to 3, a 12-year history of breathlessness which had progressed from NYHA class 1 to 3 and a 9-year history of cyanosis with no history suggestive of squatting episodes. She had tolerated 3 pregnancies uneventfully and delivered in a Primary Health Centre. Family history was not significant.

Her electrocardiogram (ECG) showed features of atypical AVNRT and she was hemodynamically stable (Figure 1). She was pharmacologically cardioverted to normal sinus rhythm with injection of adenosine 6 mg. The post cardioversion ECG showed dextrocardia but no evidence of preexcitation (Figure 2).

Transthoracic echocardiography confirmed the diagnosis of CCTGV with infundibular PS and VSD (Figure 4).

She was put on tablet diltiazem 60 mg once a day as it was the first episode of paroxysmal supraventricular tachycardia (PSVT) and was hemodynamically stable during the episode. Patient was followed up for 3 months. She did not have any other episode of palpitations or documented PSVT. This was the first episode of palpitations and also the first documented PSVT and the first cardioversion. As the patient had infrequent, well-tolerated AVNRT, she was put on tablet diltiazem as part of management strategy.

Written informed consent was provided by the patient to have the case details and accompanying images published.

CCTGV with VSD with PS is a rare congenital anomaly. It can persist till the fourth decade of life with minimal symptoms and slow progression without surgical correction. Though bradyarrhythmias, heart blocks and preexcitation are said to be common in these patients, the patients can rarely present with atypical AVNRT as in the present case. Three types of AVNRT are described. Typical or slow/fast AVNRT is the most prevalent type accounting for 85–90% of cases. Atypical AVNRT constitutes the other 10–15% of the cases, which is further differentiated into slow/slow and fast/slow AVNRT. In typical AVNRT, anterograde conduction is through slow pathway and retrograde conduction is through fast pathway; hence, the RP interval is short. But in atypical AVNRT, the anterograde conduction is through fast pathway and retrograde conduction is through slow pathway; hence, it is a type of long RP tachycardia.6 Catheter ablation of AVNRT in CCTGV is difficult due to the complex anatomy. Radiofrequency ablation using a left septal approach corresponding to the inferior border of coronary sinus ostium of the AVNRT is feasible in patients with AVNRT.7 Infrequent, well-tolerated AVNRT can be followed without specific therapy or treated with beta blockers or non-dihydropyridine calcium channel blockers.8

This paper was presented at the 33rd Annual Conference of Association of Physicians of India, Karnataka chapter, KAPICON-2015 at Vijayapura, India, as a poster presentation with interim findings. The poster’s abstract was published in “Poster Abstracts” in The Journal of the Association of Physicians of India, January 2016, volume 64. Hyperlink – http://japi.org/january_2016/poster/01_Cardiology.html.