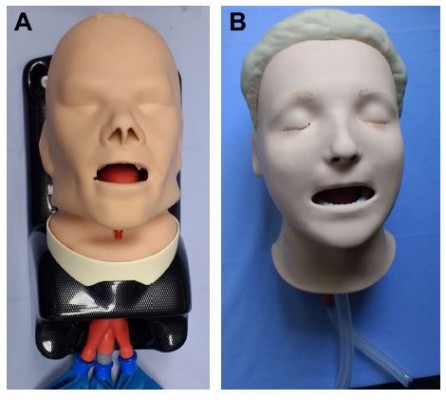 Background: Supraglottic airway devices (SADs) are an essential second line tool during difficult airway management after failed tracheal intubation. Particularly for such challenging situations the handling of an SAD requires sufficient training. We hypothesized that the feasibility of manikin-based airway management with second generation SADs depends on the type of manikin.
Methods: Two airway manikins (TruCorp AirSim® and Laerdal Resusci Anne® Airway Trainer™) were evaluated by 80 experienced anesthesia providers using 5 different second generation SADs (LMA® Supreme™ [LMA], Ambu® AuraGain™, i-gel®, KOO™-SGA and LTS-D™). The primary outcome of the study was feasibility of ventilation measured by assessment of the manikins’ lung distention. As secondary outcome measures, oropharyngeal leakage pressure (OLP), ease of gastric tube insertion the insertion time, position and subjective assessments were evaluated.
Results: Ventilation was feasible with all combinations of SAD and manikin. By contrast, an OLP exceeding 10 cm H2O could be reached with most of the SADs in the TruCorp but with the LTS-D only in the Laerdal manikin. Gastric tube insertion was successful in above 90% in the Laerdal vs 87% in the TruCorp manikin (P<0.009). Insertion times differed significantly between manikins. The SAD positions were better in the Laerdal manikin for LMA, Ambu, i-gel and LTS-D. Participant’s assessments were superior in the Laerdal manikin for LMA, Ambu, i-gel and KOO-SGA.
Conclusions: Ventilation is possible with all combinations. However, manikins are variable in their ability to adequately represent additional functions of second generation SADs. In order to achieve the best performance during training, the airway manikin should be chosen depending on the SAD in question.