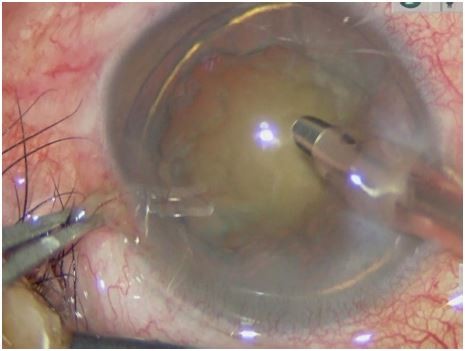 This prospective nonrandomized comparative cohort study comprised patients with age-related cataract (ARC) who chose and underwent one-handed phacoemulsification (100 eyes) at the Department of Ophthalmology, Affiliated Hospital of Nantong University, Jiangsu, China from August 2016 to September 2017. The eye conditions, such as axial length, ACD, nuclear opalescence (NO), lens thickness, and intraocular pressure (IOP), were matched with patients undergoing two-handed phacoemulsification (100 eyes). The study was performed in accordance with the ethical principles of the Declaration of Helsinki and was approved by the hospital’s ethics committee. All patients provided written informed consent after receiving a full explanation of the study. Patients undergoing phacoemulsification were divided into 2 groups based on the type of the surgical technique: one-handed technique with a 2.4-mm clear corneal incision (CCI) (one-handed group) or two-handed technique with a 2.4 mm CCI and a 1.0 mm corneal side port (two-handed group).

Lens Opacities Classification System III was used for cataract classification.16 Inclusion criteria included the following: 1) patients with NO ≤3; 2) normal anterior segment and fundus examination; 3) no history of intraocular surgery or injury; and 4) pupil dilation at the preoperative was at least 7 mm. Exclusion criteria included the following: 1) cataract other than ARC; 2) corneal scars or opacities and other ocular disease that might affect visual outcomes; 3) the diameter of the nucleus was >6 mm; 4) patients failing to undergo phacoemulsification, or the intraocular lens was not successfully placed in the capsular bag; and 5) patients failing to attend postoperative appointments.

All operations were performed under topical anesthesia with 0.5% proparacaine hydrochloride (Novartis International AG, Basel, Switzerland) by the same experienced surgeon (HG). Pupillary dilation was achieved with the instillation of 1 drop of 0.5% compound tropicamide (Santen, Osaka, Japan) every 10 minutes until the pupil diameter was >7 mm before surgery. In all cases, sodium hyaluronate gel (Bausch & Lomb, Bridgewater, NJ, USA) was used as an ophthalmic viscosurgical device (OVD), and balanced salt solution (BSS) was used as the infusion fluid.

In the one-handed group, a 2.4-mm single-plane CCI was created at a 135° position under the guidance of Verion (Alcon Laboratories, Inc., Fort Worth, TX, USA) with a diamond keratome. Continuous curvilinear capsulorhexis (CCC) was performed with capsular forceps under the protection of an OVD. After CCC, hydrodissection and hydrodelineation were performed. In preparation for phacoemulsification, the surgeon then inserted a phacoemulsification needle (Centurion, Alcon) with the right hand, and microscopic tweezers fixed the eyeball with the left hand (Figure 1).

In the two-handed group, a 2.4-mm single-plane CCI was created at 135° position under the guidance of Verion as the main corneal incision. CCC was performed with capsular forceps under the protection of an OVD. After CCC, hydrodissection and hydrodelineation were performed. A corneal side port was created at 20° position with a 1.0 mm diamond keratome. In preparation for phacoemulsification, the surgeon then inserted a phacoemulsification needle through the main corneal incision, and a manual chopper was inserted through the corneal side port (Figure 2).

All phacoemulsification was performed using the phacoemulsification machine (Centurion, Alcon) in the Ozil Intelligent Phaco mode. The ultrasound and fluidic settings were as follows: bottle height, 105 cm; power, 60%; vacuum, 500 mmHg; aspiration flow, 32 cc/min. A foldable monofocal IOL (PY-60AD; HOYA, Tokyo, Japan) was implanted in the capsular bag with an injector. At the end of the surgery, the clear corneal wound was hydrated with BSS, and no sutures were applied.

Statistical analysis was performed using SPSS for Windows software (version 22; SPSS, Inc.). Homoscedasticity of the samples was studied using Levene’s test. For the comparison of one-handed and two-handed group data, the independent t-test or the Mann–Whitney U test was used. For the comparison of pre- and postoperative data, the paired-samples t-test was used. The level of statistical significance was P<0.05.

The study evaluated 200 eyes (124 right and 86 left) of 176 patients (119 females and 57 males). Patients’ demographics and preoperative ophthalmic measurements are provided in Table 1. No significant differences in age, NO, axial length, ACD, lens thickness, and IOP were noted between the 2 groups (all P>0.05).

The surgical parameters in both groups are summarized in Table 2. No significant differences were noted between the 2 groups regarding ultrasound total time, CDE, total fluid usage, and total surgical time (all P>0.05).

The main objective of our study was to compare corneal variations in patients undergoing one-handed and two-handed coaxial phacoemulsification. To limit bias, we only included patients with ARC and the two groups exhibited similar preoperative characteristics, such as age, axial length, ACD, cataract density, lens thickness, and IOP, which were associated with intraoperative corneal endothelial injury. Since one-handed phacoemulsification is suitable for soft-to-moderate lenses,19 we only included patients with NO ≤3.

In one-handed phacoemulsification, after sculpting, a full-thickness groove is created centrally and progressing peripherally, so a half-lens diameter groove is obtained. The lens is then rotated, and another half-diameter groove is created. The basic process (cut, rotate, cut, remove, rotate, cut, and remove) is repeated.9 In the entire process, the phaco tip was completely buried in the nucleus, blocked the energy release, and reduced heat injury. In addition, nuclear fragments and/or other mechanical trauma to the corneal endothelium were significantly decreased. During one-handed phacoemulsification, hydrodissection plays a significant role. There is a single instrument (phacoemulsification tip) to rotate the nucleus, and a wave of fluid opens a space between the lens capsule and cortex. Hydrodissection, when performed well, greatly facilitates one-handed phacoemulsification. In order to perform a perfect hydrodissection, pupil dilation at the preoperative was at least 7 mm, the diameter of capsule crevasse was 6 mm. The main disadvantage of the technique is the decreased controllability of the nucleus without the help of a chopper, especially in hard or large nuclei. In our study, the ultrasound total time and CDE were slightly increased in the one-handed group compared with the two-handed group, but the differences were not statistically significant.

At present, corneal endothelial injury after phacoemulsification is generally assessed by specular microscopy in terms of changes in corneal endothelial cells. In our study, no significant difference in ECD was noted between 2 groups at any follow-up point, but the mean ECL in the one-handed group was significantly decreased compared with the two-handed group. Kawahara et al13 reported no significant difference in ECL between the 2 groups. In his study, the patients had nuclear senile cataracts grade 2–4 per Emery–Little classification, which is slightly harder than our patients, and one-handed phacoemulsification is suitable for soft-to-moderate lenses.19

Analysis of cell size is also a sensitive indicator of endothelial damage. The intercellular space becomes larger during the healing period.10 After surgical trauma, the undamaged endothelial cells undergo morphologic changes to fill the cell-free areas and restore normal function. Once endothelial repair is complete, the intercellular space is reduced to its previous size, and the endothelial layer is restored.10 In our study, the average cell size in the one-handed group was significantly decreased compared with the two-handed group at 1 week postoperative, confirming that one-handed coaxial phacoemulsification technique has the advantages of reduced trauma to corneal endothelium cells.

Given that endothelial cellular injury alters the pumping activity of this corneal layer, resulting in increased stromal hydration,11 CV and CCT are currently considered indicative of complete endothelial cell function in the area.7 In our study, both 10-mm CV and CCT were increased in the two-handed compared with the one-handed group at 1 week but not at 1 and 3 months postoperative. However, in both groups, no significant difference in ECD was noted postoperatively between the 2 groups. Our results reveal the discrepancy between the degree of alteration in ECD and CV. The increase in CV after phacoemulsification is not necessarily due to corneal endothelial damage. Several other causes, such as tissue edema resulting from heat injury in the corneal stroma, might also increase the volume.12 Suzuki et al12 reported that 10 mm CV remained significantly increased compared with preoperative values 3 months after surgery. In our study, at 3 months postoperative, 10 mm CV levels were restored to previous levels. Given that we only included early stages of cataracts in this study, corneal endothelial swelling caused by phacoemulsification may not have lasted for 1 month.

HEX% was important parameters of the corneal endothelium, high HEX% was also seen as an indicator of a healthy corneal endothelium.20 HEX% in our research was about 40%, which was lower than other research (HEX% was about 50% to 60%),20,21 the difference between the measuring instruments was an important reason. In addition, individual differences are also an important factor, hypertensive patients, high IOP, and history of outdoor work might decrease endothelial cell count1, enlargement of healthy endothelial cells and reduction in their hexagonality occur in cases of decreasing number of endothelial cells.21–24 In our research, the HEX% in 2 groups were significantly decreased postoperatively. Further studies should be undertaken to reduce the decrease of HEX% after phacoemulsification by adjusting IOP (or bottle height) and temperature of infusion fluid.

The early improvement of early visual acuity is highly pursued for successful cataract surgery. In our study, UDVA and CDVA in the one-handed group were statistically improved compared with the two-handed group at 1 week postoperatively, and these conditions were associated with corneal trauma.

SIA is influenced by the incision size, location, corneal radius, and corneal thickness.25–28 Kawahara et al13 reported no statistically significant difference between the one-handed and two-handed groups regarding SIA at 1 month postoperatively. In our study, only the between-group difference in SIA on posterior corneal surface was statistically significant at 1 week postoperatively, which might be largely associated with the early influence of corneal edema and not only due to the effect of corneal side port. Thus, the aforementioned differences were ameliorated at 1 and 3 months postoperative.

Our results indicated that one-handed coaxial phacoemulsification has the advantage of reduced trauma to the cornea. Moreover, the corneal side port in two-handed cataract surgery has no effect on the SIA after corneal edema is eliminated. However, the limitation of our study is that the study only included NO ≤3, and patients with hard lenses were excluded. Therefore, our conclusion is only limited cataract patients with a soft-to-moderate nucleus.