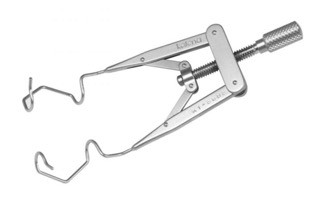 Purpose: The aim of this study was to evaluate the influence of four different types of speculums on aberrometry reading (OPD SCAN III [OPD]) and on intraoperative aberrometry reading (optiwave response analyzer, ORA).
Patients and methods: This prospective, controlled, comparative study of consecutive cases included the evaluation of five eyes of five patients with monofocal intraocular lens (IOL) implantation. Seventeen measures were performed on each patient: for each speculum, there were two measurements on the OPD and another two on ORA with four different types of blepharostats. A control measure was performed on the without blepharostat in the dominant eye of each patient, therefore totalizing 85 measurements. The measures with the blepharostats were as follows: without pressure (WF) or passive measure and after pressure (AF) or active measure to close the eye. The speculum used in all patients was as follows: open-edged wire (Barraquer); threaded with open blade (Lieberman), with 21 mm aperture; wired with solid blade (Barraquer); and threaded with solid blade (Lieberman) with 21 mm opening. An evaluation of the objective refractive data from the OPD and ORA and the corneal astigmatism from the OPD was performed.
Results: Spherical equivalent (SE) of the OPD with the use of blepharostat compared to the OPD without speculum presented only 37.5% of results without statistical significance. Regarding the SE of ORA with speculum usage, compared to the OPD without blepharostat, only 12.5% were not significant. Regarding the accuracy of the ORA refractive axis with the use of blepharostats, all results presented statistical significance.
Conclusion: Thus, in the present study, we reached the conclusion between the studied blepharostats that the most suitable for use in the aphakic and pseudophakic capture of the ORA is the open blade threaded blepharostat (Lieberman).

The opening of the eyelid for ocular surgery used to be a complex problem. Three procedures were suggested for the solution of this problem, involving the use of the following: retractors (insured by an assistant), blepharostats (speculum), sutures (inserted into the free eyelid border or skin or held in place by means of metallic devices).2

Along with an increasingly early diagnosis, there is currently a greater demand among patients who want to maintain their productivity and daily activities.3

A postoperative outcome without refractive errors is one of the main objectives of modern phacoemulsification. The corneal topography has been the most used examination to guide the surgical plane and to evaluate the postoperative results. Nevertheless, real-time information about the refractive state during cataract surgery can assist in the correct placement of intraocular lenses (IOLs), and it may also automatically consider the induced astigmatism in clear corneal incisions.4

Wavefront aberrometry is widely used to improve outcomes after visual laser correction. However, the types of aberrometers used in keratorefractive surgeries are too large to be used intraoperatively, and their variation and dynamic range are not wide enough for the aphakic measures required for cataract surgery. The optiwave response analyzer (ORA; Alcon Inc, Fort Worth, TX, USA) is small enough to be mounted under the surgical microscope and is fully integrated into an easy and accessible interface for the surgeon; it is the third-generation version of the intraoperative aberrometry system.5–7 OPD-SCAN III ([OPD]; Nidek, Gamagori, Japan) is an aberrometer popularly used in the preoperative period of cataract surgery for surgical incision programming and astigmatism correction.8

This prospective, controlled, comparative study of consecutive cases included the evaluation of five eyes of five patients submitted to femtosecond laser cataract surgery with monofocal IOL implantation. Four measures were performed with each blepharostat: two on the OPD and another two on ORA (intraoperative aberrometer) with four different types of blepharostats. A control measure was performed on the OPD, aberrometer, without speculum in the dominant eye of each patient. Therefore, despite a small number of subjects, we could reach a total amount of 85 measurements in this paper. The measures with the blepharostats were as follows: without force (WF) or passive measure and after forcing (AF) or active measure to close the eye.

An evaluation of the objective (spherical, cylinder, and axis) refractive data from the OPD and ORA and the corneal astigmatism (flat axis value [K1], steep axis value [K2], and respective axis) from the OPD was performed. Spherical equivalent (SE) was the primary outcome measure.

Statistical significance was tested using Student’s t-test and p-value for the analysis of the data collected. To infer the conclusion about which would be the best blepharostat, an absolute numerical methodology was applied, using a summary of significant p-values for each variable and apparatus (Table 1) and a table of means for each variable and apparatus (Table 2). Then, a ranking of the points of the lowest variations was performed when compared to the examination without speculum. After that, a numerical result was verified for each variable, being excluded from the ranking when the values were statistically significant (Table 3). In this way, we took the sum of the ranking for each variable and multiplied by the number of times it was statistically significant, thus obtaining a general ranking where the lowest value equals the best blepharostat (Table 4).

The study was conducted in accordance with the principles of the Declaration of Helsinki and was approved by the institutional review board (IRB) of the Hospital Oftalmológico de Brasília with written informed consent provided by the patients.

This is the first study to compare the effect of blepharostats on the ORA aberrometric measurement; furthermore, this is an unpublished study and there are no other studies to compare with. As a comparison of the data collected from the OPD with speculum with the data of the OPD without blepharostat and with the ORA measurement data was performed, a correlative inference between the OPD groups with speculum and ORA with speculum regarding the statistical comparison was established; therefore, the blepharostat that might influence less on the aphakic reading of the ORA could be settled.

It is possible to infer that the comparative analysis of ORA in relation to the OPD without blepharostat was inferior to the analysis of the OPD with speculum. The open blade threaded blepharostat (Lieberman, Katena) was the most similar to the data capture of the OPD without speculum, when the patient does or does not force the eye to close. Thus, in the present study, we reached the conclusion that the most suitable for use in the aphakic and pseudophakic ORA capture is the open blade threaded blepharostat, Lieberman (Katena), probably due to the speculum design.

The abstract of this paper was presented at the American Society of Cataract and Refractive Surgeons (ASCRS) Annual Meeting 2018 in Washington, DC, USA, as a poster presentation with interim findings. The poster’s abstract was published in “Poster Abstracts” in the ASCRS Annual Meeting Journal.

The authors report no conflicts of interest in regard to this paper.