An unusual association of headache, epilepsy, and late-onset Kleist’s pseudodepression syndrome in frontal lobe cavernoma of the cerebral left hemisphere 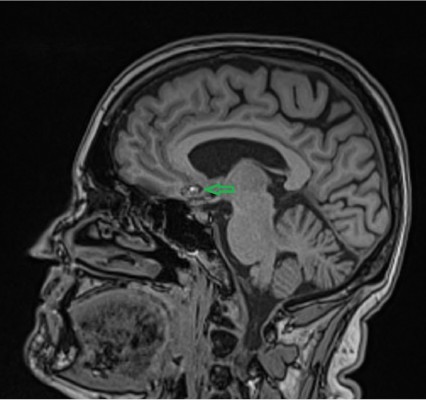 Abstract: Cerebral cavernous angioma or cavernoma is a benign vascular malformation, usually asymptomatic. It is infrequent and often its discovery is incidental, a so-called incidentaloma. However, these lesions can be symptomatic, causing headaches, epilepsy, cerebral hemorrhage and other neurological signs depending on the brain area involved. Frontal localization is responsible for psychiatric disorders, particularly the prefrontal region, leading to prefrontal syndrome, a condition common in all frontal lobe tumors. Psychopathological syndrome can be depression-type, pseudodepression syndrome or maniac-type, pseudomaniac syndrome. Surgical treatment of lesions like this may not always be possible due to their location in eloquent areas. In this study, we describe an unusual association of migraine-like headache, epilepsy and frontal lobe pseudodepression late-onset syndrome in the same patient. We have considered this case interesting mainly for the rarity of both a headache with migraine features and for the late onset of pseudodepression syndrome. Pathophysiology underlying migraine-like headache and that concerning the late-onset pseudodepression frontal lobe syndrome seems to be unclear. This case leads to further hypotheses about the mechanisms responsible for headache syndromes and psychopathological disorders, in the specific case when caused by a cerebral frontal lobe lesion.

Cavernoma, also called cavernous hemangioma or cavernous angioma, is a type of blood vessel malformation, which may be considered as a benign brain lesion.1 Cavernoma can appear at all ages, mainly occurring in the third to fourth decade of life. It is a rare condition, presenting in 0.5% of the general population. In addition, it is estimated symptomatic in 40% of cases. When present, symptoms include headaches, epilepsy due to cerebral hemorrhage and other symptoms depending on the site of the lesion.2–5 Therapeutical options available for patients who have found to have a cavernous malformation are surgery and “stand and wait” approach, depending upon the gravity of each case.6 In this report, we describe a case of a 66-year-old woman, suffering from frontal lobe cavernous angioma of the left hemisphere, which had been diagnosed 20 years earlier. She had presented over the years epileptic seizures and headaches, and 2 years ago starting to present psychiatric symptoms, suffering depression, such as late-onset frontal syndrome. An association of such symptoms in the same patient has not been reported in the literature, being unusual, especially regarding the onset of a psychiatric disorder.

A 66-year-old age female, with a frontal lobe cavernous angioma of the cerebral left hemisphere, was clinically monitored for ~20 years at the Department of Neurosurgery at Catanzaro University Hospital, Italy. She had a long history of epilepsy and headache, epilepsy consisting of both partial and generalized seizures, simple partial seizures presenting with motor symptoms and causing jerking movements of the foot, face, arm and complex partial seizures showing confusion and dizziness, with a frequency of 4–5 times per year, treated with antiepileptic drugs (AED) polytherapy, including carbamazepine, phenobarbital, lamotrigine, levetiracetam and all drugs used in different years. Electroencephalograms always showed diffuse slow activity. Brain computerized tomography and magnetic resonance imaging (MRI) (Figures 1–3) scan controls did not reveal any increase in the volume of lesion. The headache had migraine features, with and without aura, and pain attack frequency of 1–2 per month. The administration of flunarizine, at a daily dosage of 10 mg was the most effective, with regard to the drugs used, reducing further headache frequency. Approximately 2 years ago, the patient began to present psychiatric symptoms as apathy, indifference, loss of initiative, mood changes, reduction of sexuality, all evoking a state of depression. The following psychological tests were administered: Perception of Housing Quality Scale, Mini Mental State Evaluation, Activities of Daily Living, Patient Health Questionnaire, and Geriatric Depression Scale. All tests showed abnormal scores expressing a depression of moderate to severe type. Paroxetine, an antidepressant of the selective serotonin reuptake inhibitor class, was administered at 20 mg oral daily dose. The improvement of the signs of depression was gradual and in fact the patient is continuing therapy successfully with a maintenance dose of 10 mg oral daily as confirmed by psychological test control results. No adverse effects related to antidepressant were reported. The patient always refused any surgical option.

Cavernous angioma is an uncommon blood vessel malformation localized in the brain, often found by chance/incidentally, and therefore called an incidentaloma finding. It can be localized in various cortical areas and extended below the cerebral cortex.7

Histologically, cavernous malformations are composed of a “mulberry-like” cluster of dilated thin-walled capillaries, with surrounding hemosiderin. They are usually solitary, although up to one-third of patients with sporadic lesions have more than one. MRI is the modality of choice, demonstrating a characteristic “popcorn” or “berry” appearance with a rim of signal loss due to hemosiderin, which demonstrates prominent blooming on susceptibility-weighted sequences.8

Many cavernous malformations are asymptomatic and can be treated conservatively. Symptoms can relate to mass effect, headaches, epileptic activity or repeated hemorrhage. Symptomatic lesions should, when possible, be resected, and complete resection is curative. The headache is usually nonspecific, taking the pain characteristics localized at the site of the lesion, oppressive, stabbing and sometimes having a chronic course. Headaches are estimated in ~15% of symptomatic cases, with epilepsy in 5%–10% and brain hemorrhage in 1%–2% of cases. Psychiatric symptoms can rarely be found, although it is more easy in the case of voluminous lesions involving the prefrontal cortex. In this case, we report an exceptional association of headache, epilepsy and prefrontal syndrome in a patient affected by frontal lobe cavernoma of the cerebral left hemisphere. The following peculiarities were noted in this case first, the headache is a migraine type as indicated by typical symptoms with good response to flunarizine, a drug used in migraine prophylaxis. This seemed very strange, which makes it difficult to make hypotheses (eg, “traction headache for increased intracranial pressure, followed by activation of trigeminal vascular system”). Then, there is the frontal syndrome: singular was the late onset of psychiatric symptoms. These were represented by a pseudodepression or pseudopsychopathic syndrome. This psychopathological syndrome was described by Karl Kleist (1934), then followed by Blumer and Benson (1975), consisting of change of cognitive functions. Changes are characterized by indifference, apathy, reduced sexuality, akinesia, loss of initiative and crying. These symptoms are related to lesions of the dorsolateral frontal cortex, giving rise to the pseudodepression syndrome, a frontal syndrome with negative signs opposed to that with positive symptoms, the pseudomaniac syndrome, related to damage of fronto-orbital cortex, representing with euphoria, restlessness, sexual disinhibition and childishness.9 Luria (1969) named apathic–akinetic–abulic syndrome a disorder characterized by severe inertia, inactivity reaching a catatonic state, a consequence of bilateral frontal extensive lesions. Several studies demonstrate that the right frontal cortex is also responsible for psychiatric disorders.10 Therefore, the case described, and not reported in the literature, appears unique for the combination of symptoms in the same patient: epileptic seizures, a migraine-like headache and especially the prefrontal syndrome, suggestive and strange for late-onset symptomatology.

Cerebral cavernous angioma is usually an asymptomatic, benign vascular lesion. When symptoms appear, they cause headaches, epilepsy and other signs related to the site of lesion. Frontal lobe cavernomas can provoke psychiatric signs, mostly those involving the prefrontal region. While a rare condition is the association of the symptoms listed earlier in a patient, even more rare are migraine-type headaches, and particularly the development of psychiatric syndromes, a late-onset frontal syndrome or yet still a pseudodepression syndrome. The study of this case has induced/motivated/galvanized us to analyze the clinical signs of this unusual association offering the hope/prospect for the explanation of suggestive pathophysiological hypotheses.

Written informed consent for publication of the patient’s clinical details and clinical images was obtained from the patient.

We thank Dr Michael Ashour for his great help in improving the English language of our manuscript.