A case of choroidal osteoma in a 10-year-old child 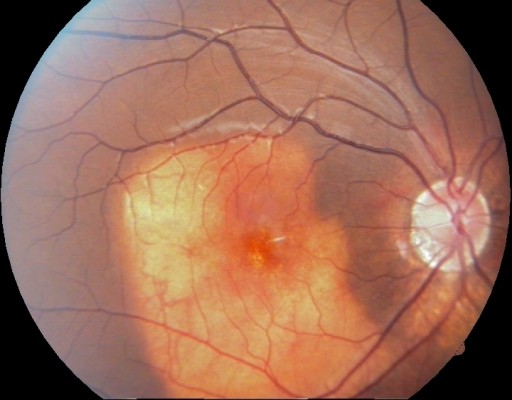 Abstract: Choroidal osteoma is a rare, benign tumor, usually diagnosed in healthy adult women in their second or third decade of life. Though its etiology and pathogenesis are unclear, it is usually diagnosed due to its typical clinical features of yellowish-orange colored subretinal lesion at posterior pole and a dense echogenic plaque persisting even in lower gains on B-scan ultrasonography. Mostly unilateral (79%), the median age of diagnosis is 26 years. It is relatively rare in children. We report a case of choroidal osteoma in a 10-year-old boy.

Choroidal osteoma (choroidal osseous choristoma) is a benign tumor of unknown etiology first described by Gass et al 1978.1 It is typically found in healthy young women, mostly unilateral, in the posterior pole of the eye, near the optic disc and becomes clinically apparent when it involves the macula. Though present from birth, it is usually diagnosed during the second or third decade of life. The diagnosis of choroidal osteoma is based on its very characteristic clinical picture, ultrasonography, and fundus fluorescein angiography findings.

A 10-year-old boy presented with a decreased vision in the right eye. His best corrected visual acuity was 6/60, N6 in the right eye and 6/6, N6 in the left eye. Anterior segment was unremarkable in both eyes. Funduscopy of right eye revealed a large subretinal, orange colored lesion of approximately three disc diameters in size in the macula whereas that of left eye was normal (Figure 1). B-scan ultrasonography of the right eye demonstrated dense echogenic plaque persisting even at 50 db gain (Figure 2). On fundus fluorescein angiography, the lesion showed hyperfluorescence which was progressively increasing in mid-phase with intense staining in late phases. Clinically, there was no evidence of any subretinal neovascularization and optical coherence tomography was also normal. The patient was asked to come for regular follow-up. Over the next year on periodic follow-up, no variations of the mass were noted and vision also remained stable. Appropriate informed consent was taken from father of the child. Institutional Review Board approval was deemed not necessary for the following case study. All principles outlined in the Declaration of Helsinki were followed.

The most important complications of the tumor are subretinal neovascularization, subretinal and intraretinal hemorrhages, and serous and hemorrhagic retinal detachments.

Choroidal osteoma must be differentiated mainly from amelanotic choroidal melanoma, choroidal nevus, choroidal hemangioma, choroidal metastasis, granuloma, organized subretinal hemorrhage, sclerochoroidal calcification, posterior scleritis, and age-related macular degeneration. In our case, melanoma was ruled out as such lesions are usually elevated and associated with overlying drusen and retinal pigment epithelial proliferations and sometimes with neurosensory retinal detachment. Moreover, melanomas typically show high surface reflectivity and low internal reflectivity on ultrasonography. Choroidal hemangioma owing to its vascular structures typically shows high surface reflectivity with moderate to high internal reflectivity on ultrasound. Choroidal metastases are typically yellow lesions and should be considered in those with a known source of primary malignancy elsewhere. Organized subretinal hemorrhage can also mimic osteoma but is more common following blunt trauma. Posterior scleritis is usually a painful condition associated with a sudden drop in vision and is more common in women with a history of rheumatoid arthritis.

Though seen in adults, choroidal osteoma can present in children as well5 where it can pose a serious diagnostic challenge as it can mimic other non-pigmented lesions at posterior pole like retinoblastoma, congenital retinochoroidal coloboma, and congenital toxoplasmic retinochoroiditis. Retinoblastomas are typically white lesions whereas colobomas are non-pigmented, deeply excavated lesions associated with coloboma of iris and microcornea and nystagmus and so on. Congenital toxoplasma scars are pigmented lesions typically present in fovea and are usually bilateral.

To conclude, choroidal osteomas are benign tumors of uveal tract, of unknown cause, typically seen in young adults, unilateral and orange red in color. Fundus fluorescein angiography shows typical patchy hyperfluorescence with intense late staining whereas ultrasonography shows a highly reflective echo that persists at lower sensitivity. Magnetic resonance imaging shows the tumor to be hyperintense to vitreous in T1 images and hypointense to vitreous in T2 images.

Treatment is only by observation.