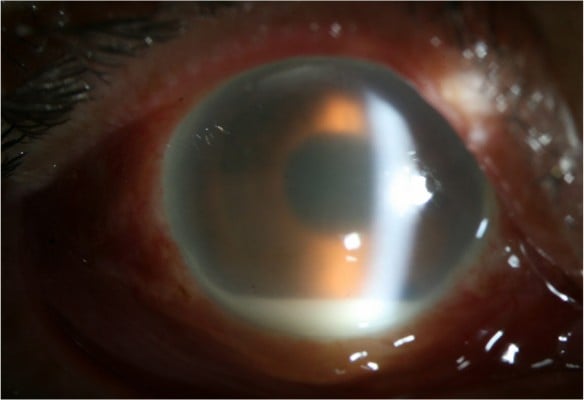 Abstract: Endophthalmitis following intraocular surgery can be devastating. This case report demonstrates successful management of late-onset Streptococcus mitis endophthalmitis treated by vitrectomy, panretinal photocoagulation (PRP) and silicone oil tamponade. A 75-year-old man presented with painful vision loss in his right eye. The patient had uneventful phacoemulsification and intraocular lens implantation in the right eye at an outside clinic 6 weeks prior. Examination disclosed hypopyon and vitritis, as well as discrete inflammatory collections in the vitreous. The patient underwent vitrectomy with PRP and silicone oil tamponade. Vitreous cultures were positive for S. mitis, a pathogen associated with severe tissue damage and poor clinical outcomes. One month after the surgery, intraocular inflammation was stabilized, and visual acuity was improved from light perception to 20/200. Aggressive surgical management may play a role in improving outcomes in these patients.

Endophthalmitis following intraocular surgery can be devastating. The visual loss and debilitation that occur in a large proportion of postoperative endophthalmitis cases can be severe and irreversible. Outcomes for cases of endophthalmitis involving oral Streptococcal species are notoriously poor; even with timely therapy, final visual acuity of <20/400 occurs in up to 50%–80% of these cases, with many cases requiring evisceration or enucleation.1–3 Presumably, there are other pathogenic mechanisms at work that are not addressed by intravitreal antibiotics alone, and a more aggressive therapeutic approach may be warranted. We describe successful management of a case of late-onset (6 weeks) Streptococcus mitis endophthalmitis after uncomplicated cataract surgery was treated promptly with vitrectomy, panretinal photocoagulation (PRP) and silicone oil tamponade.

A 75-year-old man was referred to our hospital for severe pain and decreased visual acuity started 1 day ago in the right eye. Six weeks prior to this, the patient had uneventful phacoemulsification and intraocular lens (IOL) implantation in the right eye at an outside clinic. On examination, the best-corrected visual acuity (BCVA) was light perception in the right eye. Slit-lamp biomicroscopy of the eye showed severe conjunctival injection, corneal edema, corneal infiltration at superior main incision, membrane formation around the IOL and a deep anterior chamber with a 2 mm hypopyon, which were thought to represent infectious endophthalmitis (Figure 1). There was no view of the fundus in his right eye. B-scan ultrasonography demonstrated significant vitreous opacities (Figure 2). A diagnosis of acute postcataract surgery endophthalmitis was made.

Given the severity of the patient’s presentation and with the presence of severe vitreous opacities, the patient underwent a 23-gage transconjunctival sutureless vitrectomy using the Dutch Ophthalmic Research Center two-step reusable system (DORC; Zuidland, the Netherlands). The cannula was inserted at a 10°–30° angle through the conjunctiva, sclera and pars plana 3.5 mm from the limbus. The cannulas were placed in the inferotemporal, superotemporal and superonasal quadrants. An illumination probe was placed at the superonasal quadrant, and a 23-gage infusion cannula was placed at the inferotemporal quadrant. A noncontact Biom indirect viewing system (Oculus Inc., Petaluma, CA, USA) was used for the visualization of the posterior segment. Vitrectomy was performed using a 23-gage high-speed vitrector with a cut rate of 2,500/minute. The vitrectomy involved complete removal of the posterior vitreous till the vitreous base. During the vitrectomy, we saw severe vitreous opacities and a thick exudative membrane that covered the entire retina (Figure 3A). After delicate vitrectomy-like shaving, we could see the disk and major vessel arcade faintly. Retinal hemorrhages were noted in all quadrants (Figure 3B). Because retina appears pale, we performed PRP. After PRP, fluid–air exchange and then silicone oil injection were performed.

Improvement of pain was noted on postoperative day 1, and the patient was started on a regimen of ophthalmic drops that included fortified vancomycin (50 mg/mL) and amikacin (20 mg/mL), prednisolone 1%, and homatropine 2%, as well as systemic antibiotics (flomoxef 1.0 g every 12 hours). Vitreous specimens obtained during vitrectomy were found to be positive for S. mitis (Figure 4). On blood agar, Gram-positive cocci 0.6–0.8 μm in diameter, arranged in pairs or chains, nonmotile colonies were seen after 2 days of incubation. The isolate was susceptible to amikacin, methicillin, ceftriaxone, moxifloxacin and vancomycin.

On postoperative day 7, BCVA improved to 20/400, and slit-lamp biomicroscopy showed moderate inflammatory reaction without hypopyon and decreased inflammatory membrane on the IOL. During 1 month of postoperative follow-up, the patient’s right-eye BCVA gradually improved to the range of 20/200 to light perception, and the patient remained stable without pain or ocular discomfort. Fundus examination revealed an attached retina with resolving vitreous haziness, complete silicone oil fill and 360° PRP marking (Figure 5).

Written informed consent was obtained from the patient for publication of this case report and any accompanying images.

S. mitis is an α-hemolytic Gram-positive coccus of the viridians streptococcus group and is commonly found in the oropharynx, respiratory tract, female genital tract and gastrointestinal tract. Although considered to have low virulence and pathogenicity, it may cause life-threatening infections, particularly endocarditis and meningitis.4 S. mitis is rarely found as normal conjunctival commensal. Possible sources of contamination include contamination of the needle or the patient’s conjunctiva with S. mitis during the procedure itself or even while talking between the patient, surgeon and other staff.5 Recently, endophthalmitis outbreak of S. mitis after intravitreal injection of bevacizumab has been reported, and contamination during syringe preparation of compounding pharmacy was found as the cause, which implies that microbial contamination could occur at any step of preparation or surgical procedures.6 The source of infection in our patient remains doubtful as our patient developed late-onset endophthalmitis (6 weeks following cataract surgery). The patient presented within 12 hours from onset of symptoms and responded well to immediate vitrectomy with PRP and silicone oil tamponade in spite of severe inflammation.

The Endophthalmitis Vitrectomy Study (EVS), published in 1995, was a prospective, randomized and multicenter clinical trial that evaluated the roles of pars plana vitrectomy and systemic antibiotics for the management of acute-onset endophthalmitis following cataract surgery or secondary IOL implantation in 420 patients.7 Between the immediate vitrectomy and intravitreal injection of antibiotics-only subgroups, there was a threefold increase in the frequency of achieving 20/40 or better, nearly a twofold chance of achieving 20/100 visual acuity or better and a 50% decrease in the frequency of severe visual loss (defined as visual acuity worse than 5/200) in those who presented with an initial vision of light perception only and who underwent an immediate vitrectomy. The EVS represented large-gage vitrectomy, and its results may not be applicable to the small-gage vitrectomy widely performed today. We believe that, in the era of small-gage vitrectomy, immediate vitrectomy for endophthalmitis may be of significant benefit in removing infectious material and vitreous debris, which are paramount, respectively, for accelerating infection clearance and optimizing visual outcomes.

Chung and Sung8 reported excellent outcome in a case of S. mitis endophthalmitis after complicated iris-fixated phakic IOL implantation treated with intravitreal antibiotic injection as there was no vitreous involvement. However, the S. mitis endophthalmitis after intravitreal injections and intraocular surgeries has been reported with devastating visual outcomes in majority of patients.5,9–11 Taken together, the virulence and pathogenicity seem to be different on the tissue-by-tissue or organ-by-organ basis.8

Endophthalmitis caused by exotoxin-producing bacterial species such as S. mitis is often associated with severe vision loss or loss of the eye. Aggressive surgical management may play a role in improving outcomes in these patients.

This study was supported by 2017 Kangwon National University Hospital Grant.