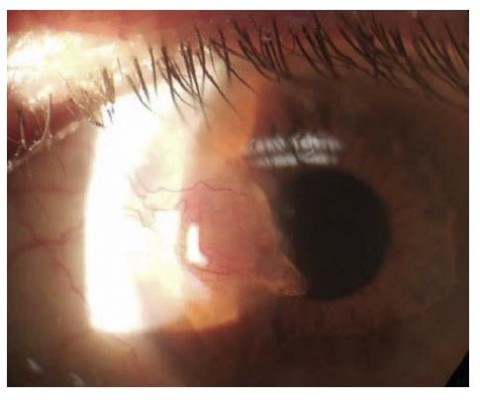 Abstract: We present a case of a 49 year-old male with history of corneal neovascularization secondary to herpes zoster keratitis that clinically and subjectively improved for approximately 4 months after treatment with argon laser photocoagulation to feeder vessels and subconjunctival bevacizumab. This is the first report in the literature that describes this novel combination treatment for corneal neovascularization in the setting of varicella-zoster virus and discusses its efficacy.

A 49 year-old male with history of bilateral LASIK and varicella zoster keratitis of the left eye presented with complaints of blurred vision and foreign body sensation in the left eye. The patient had been treated with systemic valacyclovir (GlaxoSmithKline, Research Triangle Park, NC, USA) 1 g daily and topical prednisolone acetate 1% twice daily (Allergan, Ettlingen, Germany) for corneal neovascularization (CNV) that had been present for approximately 1 year with minimal improvement in symptoms at an outside facility. At presentation, best corrected visual acuity (BCVA) was 20/20 OD and 20/25-2 OS. Slit-lamp examination of the left eye revealed a nasal stromal scar with neovascularization and associated lipid deposition (Figure 1).

Given the appearance of the vessels, chronic pathology and recalcitrant symptoms, a decision was made to treat the worsening CNV using a combination therapy of a single treatment of laser photocoagulation and single treatment of subconjunctival bevacizumab. We used 700 spots of argon green 514 nm laser (300 micron spot size, 0.1 second duration at 200–400 mW power) on the prominent feeder vessels. Blanching of vessels was used as an endpoint. Immediately thereafter, 1.25 mg of bevacizumab was injected with a 30 gage needle subconjunctivally in several areas around the CNV. The patient was continued on systemic valacyclovir and prednisolone acetate 1% to the left eye twice daily.

At the 6-week follow-up, BCVA was 20/20-2 OS and there was dramatic regression of the previously noted CNV and near resolution of the patient’s symptoms (Figure 2A and B). The patient was satisfied with the interval improvement and elected to stop his topical steroids and systemic antiviral therapy despite physician recommendations to continue. He was lost to follow-up and returned after 4 months whereupon he reported a partial return of previously reported symptoms. Clinical exam revealed visual acuity 20/25 OS and return of CNV to a lesser degree than at initial presentation (Figure 3). Despite discussion to implement further treatment, the patient declined further intervention.

CNV is a sight-threatening complication that may occur due to the imbalance between angiogenic and antiangiogenic factors affecting formation of abnormal vessels on the cornea. This may impair vision by causing stromal lipid deposition, hemorrhage, and scarring.1,10 Previous studies have found that an imbalance between positive and negative regulatory angiogenic factors such as VEGF play a pivotal role in CNV.5

Varicella-zoster virus (VZV) is a well-known cause of ocular infection, causing both immediate and delayed infectious and inflammatory responses. Treatment strategies for management of VZV infection include a combination of anti-viral and anti-inflammatory treatment modalities.7 Current treatments for CNV secondary to VZV include topical anti-inflammatory medications, laser photocoagulation, photodynamic therapy, fine needle diathermy, and anti-angiogenic treatments.5

Laser-induced photocoagulation utilizes a beam of light directed at a vessel to cause heat-induced coagulation and vessel occlusion.10 Previous studies have demonstrated its effectivity to reduce the extent and density of lipid deposition, thus causing coagulation with subsequent regression of CNV.5,8 However, treatment with laser is not without obstacles. Identification of feeder vessels can be difficult. Also, destruction of vessels can increase the inflammatory response resulting in upregulation of VEGF and an increase in subsequent CNV.1,10 In addition, several courses of treatment may be necessary to achieve long-term regression.5

VEGF plays a key role in angiogenesis and pathologic neovascular diseases of the eye.6,11 Bevacizumab (Avastin; Genentech, Inc., South San Francisco, CA, USA) is a recombinant humanized monoclonal immunoglobulin G1 antibody, directed against VEGF-A that functions to downregulate VEGF function.6 It has been used “off-label” for the treatment of posterior segment neovascularization and the ophthalmic literature is replete with reports of its efficacy.6

Anti-VEGF therapy may offer a useful treatment strategy for CNV.6,9,11Studies have shown that subconjunctival bevacizumab causes an involution of new vessels, mitigation of the inflammatory response, and restoration of corneal function with minimal collateral damage to healthy corneal tissue.2,9 Topical ranibizumab, a recombinant humanized monoclonal antibody about one third the size of bevacizumab, has been shown to be more efficacious earlier in the course of treatment of CNV than topical bevacizumab.3,10 Given that neither medication is approved for the treatment of CNV, and the lack of data regarding subconjunctival ranibizumab, it is difficult to justify the increased cost of ranibizumab without the results of rigorous prospective studies. For similar reasons, aflibercept was also not used. Therefore, in our patient, we elected to inject bevacizumab rather than ranibizmab or aflibercept. However, there are limitations for the use of bevacizumab as it effectively inhibits CNV only if administered early in the disease and its short-acting mechanism of action only targets VEGF-A. It is hypothesized that in chronic neovascularization, the formation of pericytes around the matured vessels may affect the diffusion and effect of bevacizumab.3

There are currently many different approaches to the management of CNV, though limited literature is present on the use of combination therapy of laser photocoagulation and subconjunctival bevacizumab.4 Using previously described successes with both modalities, we chose to combine these therapies for treatment of CNV in this patient given the chronic and recalcitrant pathology. A publication by Gerten outlines the use of subconjunctival bevacizumab and argon laser to treat neovascularization in the setting of corneal transplant, however, this is the first case report of using this combination strategy for the treatment of CNV in the setting of VZV-induced CNV.4 The rationale for using combination therapy is that each method attempts to overcome the other’s limitations. Laser photocoagulation is an effective method of thermal damage against corneal vessels. However, the process can incite significant inflammation and stimulate VEGF secretion, which may cause recurrence of CNV.5 Anti-VEGF therapies may be a gentler approach to CNV management by mitigating inflammation while keeping healthy corneal tissue intact. However, anti-VEGF is limited in its penetration against chronic vessels and often requires repeat treatments. Therefore, using both laser therapy and subconjunctival bevacizumab may be more effective than using a single treatment modality.

Our case demonstrates an example of short-term success with dual therapy as our patient had considerable regression of CNV after one session of argon laser followed by subconjunctival bevacizumab (Figure 2A and B), as described previously. Furthermore, the parameters used for concurrent laser therapy and subconjunctival bevacizumab, as described previously, appear to be safe in the follow-up period we observed. However, the CNV returned after 4 months along with similar symptoms. Given that treatment of posterior segment neovascularization often requires multiple treatments, it is reasonable to extrapolate these observations to the anterior segment, and that further treatment with laser photocoagulation and subconjunctival bevacizumab would be needed to ensure long-term CNV regression and quiescence. It is possible that our patient may have achieved this endpoint with further treatment sessions, though how many sessions or adjuvant therapies would have been required remains unknown as he declined further treatment. Future studies with a longitudinal design may be able to comment on potential long-term side effects of combination therapy.

Combination therapy, as described in this report, holds promise for the treatment of CNV. More research is required to determine the optimal interval for treatments, the dose of anti-VEGF, and the amount of laser. Specifically, it is still unclear whether patients may require long-term therapy with combination therapy or other treatment options to ensure resolution of CNV and associated symptoms. It is also important to note that subconjunctival bevacizumab is off-label, and in addition to the risks associated with this medication, there may be barriers in obtaining insurance coverage and reimbursement in this setting. Regardless, both of these methods may offer clinicians an effective, lower risk, office-based alternative treatment strategy for CNV, as compared to surgical options, especially if our short-term results using combination therapy are found to be effective in the long term with further studies.

Informed consent from the patient

Written informed consent was obtained from the patient to use clinical and treatment information in regards to this case report.