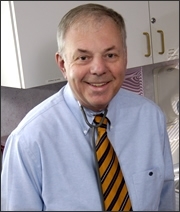 Dr. Rudolph Navari received the Ph.D. degree at the University of Virginia, and the M.D. degree at the Medical College of Virginia. He received training in internal medicine at the University of Alabama in Birmingham, and was a Fellow in Hematology and Oncology at the Fred Hutchinson Cancer Research Center, University of Washington School of Medicine. He is board certified in internal medicine and medical oncology. From 1983 to 1998, he served on the Clinical Faculty of the University of Alabama Birmingham and was a practicing medical oncologist in the Simon-Williamson Clinic. During this time, he was Chairman of the Department of Medicine and President of the Simon-Williamson Clinic, Director of the Bone Marrow Transplantation Program and Director of the Comprehensive Cancer Program at Baptist Medical Center. In 1997, he was elected a Fellow of the American College of Physicians. During 1998-99, he was a Fellow in Clinical Medical Ethics in the MacLean Center for Clinical Medical Ethics at the University of Chicago.

He joined the faculty of the College of Science of the University of Notre Dame (UND) in 1999 as Director of the Walther Cancer Research Center. He was appointed Associate Dean, College of Science, in 2000. In July, 2005, he became Professor of Medicine, Assistant Dean and Director, Indiana University School of Medicine South Bend (IUSM SB), and Adjunct Professor of Biochemistry, University of Notre Dame. In 2011, he was appointed Clinical Director, Harper Cancer Research Institute, a partnership between IUSM SB and UND. He was promoted to Associate Dean in 2012. Along with the medical students at IUSM SB, he founded the IUSM SB Student Outreach Clinic in 2013 and was appointed the Clinic’s first Medical Director.

In 2014, he joined the World Health Organization as Director, Cancer Care Program, Eastern Europe. In 2015, he became Director, Cancer Care Program, Central and South America. In 2016, he joined the Division of Hematology Oncology at the University of Alabama Birmingham School of Medicine as Professor of Medicine and the UAB Comprehensive Cancer Center as Senior Scientist.