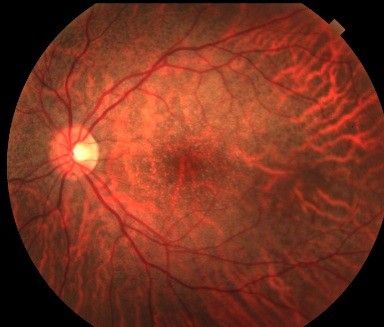 Purpose: We report an unusual case of bilateral vertical lacquer crack with no history of ocular trauma and with progressive marked enlargement and consequent visual loss.
Methods: Three-year follow-up was completed using best-corrected visual acuity, serial fundus photographs, intravenous fluorescein angiography, and optical coherence tomography.
Results: We report the occurrence of lacquer crack in a 43-year-old woman with no history of trauma except for laser in situ keratomileusis surgery for mild myopia (as reported by the patient) in the past 5 years and habitual ocular rubbing. Lacquer crack started in the right eye and became evident 1 year later in the left eye. Serial photography after repeated intravitreal injections of ranibizumab for subfoveal choroidal new vessel showed the lacquer crack widened gradually in both eyes. Axial length measurement revealed the presence of high myopia. Best-corrected visual acuity dropped to 20/200 bilaterally.
Conclusion: We hypothesize that a thin Bruch's membrane in high myopia is prone for small rupture initially either spontaneously or following laser in situ keratomileusis and subsequent widening of the rupture by oculopression and intravitreal injections from rise in intraocular pressure.

Three diseases that involve Bruch’s membrane give somewhat similar fundus appearance in different clinical settings: choroidal rupture (trauma),1–3 angioid streaks (pseudoxanthoma elasticum),4,5 and lacquer cracks (high myopia). Choroidal rupture is a break in the retinal pigment epithelium, Bruch’s membrane, and throughout the choroid following blunt trauma. Clinically, it appears as single (or multiple) white or yellowish crescent-shaped subretinal streak concentric to the optic disc.1,2 During a closed globe injury, the eyeball is initially compressed followed by rapid rebound expansion. The sclera’s tensile strength resists this compression. The retina is elastic and stretches during such an injury. However, Bruch’s membrane lacks elasticity and breaks, taking with it the overlying retinal pigment epithelium and underlying choroid. On the other hand, angioid streaks usually emanate from the disc, tend to be straighter, and are reddish in color. Angioid streaks are associated with several systemic diseases, the most common being pseudoxanthoma elasticum.4–6 Bruch’s membrane in pseudoxanthoma elasticum is markedly thickened and calcified losing its elasticity and, hence, becomes brittle with dehiscence after minor trauma.5 The third disease, lacquer crack, is typically found in high myopia (with a prevalence ranging from 4.3% to 9.2%).7–10 Experimentally and histologically, lacquer cracks represent healed and mechanical breaks of the retinal pigment epithelium, Bruch’s membrane, and choriocapillaris complex.11 We present a case of progressive sequential bilateral very wide single vertical macular angioid streak-like lacquer crack with no history of blunt trauma and with gradual visual loss after intravitreal injections for choroidal new vessel (CNV) formation.

A 43-year-old married Syrian woman presented at the age of 40 with distortion of central vision in the right eye. Choroidal dystrophy was suspected in Damascus (Syria) (Figures 1 and 2). Rheumatology and infectious workup was negative (syphilis, tuberculosis, anti-double-stranded DNA, anti-single-stranded DNA, rheumatoid factor). CNV was also detected in the macular area in Dubai (United Arab Emirates) and intravitreal injections were advised. She subsequently received three monthly intravitreal ranibizumab injections in Barcelona (Spain) (Figure 3A and B). Past ocular history revealed myopia of 2.5 D as per patient recollection. She had undergone bilateral refractive surgery (excimer laser 5 years ago followed by laser in situ keratomileusis [LASIK] 3 years ago). Medical history was negative. There was a strong family history of myopia and no parental consanguinity. Fifteen months after initial right eye involvement, the patient expressed the same symptoms in the left eye, such as seeing broken lines and asymmetric faces. She was advised to undergo treatment for CNV in the macular region. She received one injection in Beirut (Lebanon), and subsequently, three monthly injections in Dubai to the left eye. She reported further worsening of vision after each injection. Consultation in London (UK) revealed a best-corrected visual acuity of 20/80 in the right eye and 20/30 in the left eye. Dilated fundoscopy revealed bilateral areas of vertically linear atrophy, more extensive in the right eye, without subretinal fluid or hemorrhage by optical coherence tomography. Fundus autofluorescence imaging revealed areas of reduced autofluorescence corresponding to these areas of atrophy. The reported clinical impression then was myopic chorioretinal degeneration versus lacquer crack-associated myopic degeneration. She was advised to have regular checkup without intravitreal injections as long as the macula stays dry. The patient was frustrated because of both inability to pinpoint a definite diagnosis and gradual decline in vision bilaterally. Nine months later, she initially presented to our clinic with 20/200 visual acuity. Fundoscopy revealed definite widening of the vertical macular choroidal rupture bilaterally (Figure 4A and B). Stippled changes in the retinal pigment epithelium were observed. Peau d’orange appearance was not present. The patient was emmetropic without keratoconus on corneal topography. Axial length measurement with the IOL Master (Carl Zeiss Meditec AG, Jena, Germany) was 27.35 mm in the right eye and 27.31 mm in the left eye. Keratometry readings were 38.6 D in the right eye and 38.2 D in the left eye. The skin of the neck had tiny pinkish papules suspicious for early goose flesh (Figure 5). Two separate dermatology consultations and skin biopsies did not favor the diagnosis of pseudoxanthoma elasticum. Even further widening of the choroidal rupture occurred 9 months after presentation. Our working diagnosis was lacquer crack from high myopia (without pseudoxanthoma elasticum) (Figure 6) possibly initiated by LASIK and exacerbated by ocular rubbing and intravitreal injections (Figure 7). The patient was instructed to avoid ocular rubbing, head-down position, and intravitreal injection (unless an exudative component was present) and to have prior paracentesis before any future intravitreal injections.

We propose the following pathophysiology to explain several findings in the present case (Figure 6). Macular lacquer cracks can occur spontaneously7,8 or just after LASIK procedures.9 In these high myopes that undergo LASIK, mechanical stress caused by intraocular pressure (IOP) elevation from the pneumatic suction ring may induce tangential stress at the posterior segment (sudden increase in IOP to 60–70 mmHg).7 Another potential cause of stress might be the impact of excimer laser on the cornea producing stress waves along the axis of the eye. Stress wave amplitudes during photoablation reach a maximal pressure focus of up to 100 atmospheres located in the posterior lens and anterior vitreous and then decrease to below 10 atmospheres at the retina.12 In addition, IOP increases by an average of 30 mmHg in eyes without reflux, 1 minute after intravitreal injections.13 This acute IOP elevation puts stress on a weak, thin, and brittle Bruch’s membrane leading to cracks. Via a similar mechanism, oculopression (ocular massage) can cause dehiscence of Bruch’s membrane as reported by Ruderman et al,14 or as in our case, widening of the Bruch’s membrane–choroid dehiscence. Rishi et al15 described a 12-year-old girl with osteogenesis imperfecta, with sudden visual loss in the left eye from choroidal neovascular membrane. She underwent treatment with intravitreal bevacizumab (1.25 mg/0.05 mL). Follow-up at 1 month revealed the development of lacquer crack running through the macula, underlying the fovea. The patient received two re-treatments at 1-month intervals with further progression of lacquer cracks, while CNV had regressed and vision stabilized at the 20/200 level. It is also conjectured that the further widening of the lacquer crack occurred as a result of transient increase in IOP following the intravitreal injection. There has been a similar event of enlargement of angioid streaks following intravitreal bevacizumab in an eye with CNV.6 Also, choroidal ruptures were observed after intravitreal injection of bevacizumab for aggressive retinopathy of prematurity.3

We presented a case of extremely wide lacquer crack that resembled an angioid streak and led to some difficulty in diagnosis and management, especially with the absence of a history of high myopia. Many high myopes have progressive enlargement of the posterior sclera causing passive stretch on a brittle, thinned out Bruch’s membrane. Hence, these eyes are at moderate risk for Bruch’s membrane rupture and these breaks can enlarge with time. Care needs to be exerted in such eyes in order to avoid IOP rise from blunt ocular trauma, ocular rubbing, and ocular surgery such as LASIK, intravitreal injections, and phakic lens implant.

The institutional review board at Rafic Hariri University Hospital did not require the author to obtain ethics approval and patient consent because of the purely descriptive nature of an anonymous report.