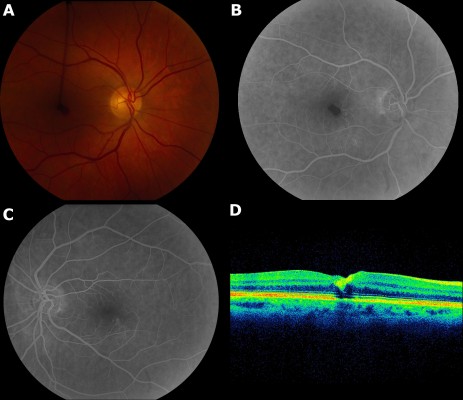 Abstract: We report three cases of idiopathic macular telangiectasia type 2 with temporally decentered preretinal hemorrhage as the presenting sign. The preretinal blood obscured the telangiectatic vessels such that the diagnosis was only evident by fluorescein angiography of the fellow eyes, which had near-normal vision. The preretinal hemorrhage was associated with Valsalva maneuver in one patient and with type 3 subretinal neovascularization in one patient. We speculate that the vascular dilations in idiopathic macular telangiectasia type 2 may increase patients’ susceptibility to rupture and hemorrhage with increased venous pressure.

Idiopathic macular telangiectasia (IMT) type 2 is a bilateral condition where the early stage is characterized by funduscopically subtle dilation of the temporal perifoveal capillary beds with cystic retinal degeneration. In 1993, Gass and Blodi1 segregated patients with idiopathic juxtafoveal retinal telangiectasia, now known as IMT, into three groups. Yannuzzi et al2 updated this classification based on biomicroscopy, fluorescein angiography (FA), and optical coherence tomography (OCT). In this classification, IMT type 2 is characterized by occult telangiectatic vessels, a loss of retinal transparency, right angle retinal venules, retinal pigment hyperplasia, and subretinal neovascularization (SRNV). To the best of our knowledge, preretinal hemorrhage (PRH) has not previously been reported in association with IMT type 2.

Institutional Review Board approval was not deemed necessary for the following retrospective review. All principles outlined in the Declaration of Helsinki were followed.

A 60-year-old Caucasian female presented with a central scotoma in her right eye 2 weeks after severe emesis. She was referred with macular hemorrhage OD. The best corrected visual acuity (BCVA) was 20/400 OD and 20/30 OS. Blood pressure (BP) was 117/76 mmHg, and there was no history of hypertension or diabetes. Dilated fundus examination revealed PRH covering the fovea and extending temporally (Figure 1). OCT demonstrated preretinal hyperreflectivity with blocked transmission OD and irregular cystic spaces OS without alteration in macular thickness or contour. No SRNV, subretinal hemorrhage (SRH), pigment epithelial detachment, or posterior vitreous detachment was evident. On FA, there was preretinal blockage OD and late leakage from telangiectasia in the temporal macula OS. Four weeks later, she returned with unchanged BCVA, clearing of the PRH, and new SRH from juxtafoveal SRNV. She was treated with intravitreal bevacizumab monthly with clearing of the hemorrhage after six injections. The BCVA stabilized at 20/100 but she continued to have a monthly injection requirement to prevent worsening exudation.

A 67-year-old female with diabetes, anemia, and hypertension presented with PRH partially obscuring the fovea OD. BCVA was 20/70 OD and 20/30 OS, and BP was 124/80 mmHg. There was no evidence of diabetic retinopathy. OCT displayed increased foveal inner retinal reflectivity OD. FA demonstrated blockage from the hematoma OD and macular telangiectasia (Figure 2). Four weeks later, visual acuity (VA) improved to 20/30 OD with resolution of the PRH.

IMT is classified into three subtypes.2 Type 1 is typically found in men and is unilateral. Intraretinal aneurysmal changes are noted with macular edema, but no neovascularization or hemorrhage. There is prominent lipid deposition and often vascular changes in the peripheral fundus. This type lacks crystalline deposits and pigment proliferation. Type 2 is bilateral and has no sex predisposition. Its characteristics are detailed earlier. Type 3 is described as a rare ischemic foveal disease with the development of dilated capillaries in response to perifoveal capillary nonperfusion. It is not thought to be a telangiectatic disease.

PRH may be precipitated by vitreous traction on pathologic retinal neovascularization, Valsalva retinopathy (VR) or, less frequently, hemorrhaging of intraretinal or subretinal vascular abnormalities. The elevated venous pressure during a Valsalva maneuver causes decompensation at the perifoveal capillary bed with hemorrhage between the retinal surface and the posterior hyaloid face.3 We suspect that the dilated, anomalous vessels in IMT type 2 are more susceptible to spontaneous hemorrhage due to localized vascular fragility.4,5 In contrast to typical cases of VR, the PRHs in our patients with IMT type 2 were decentered temporally and restricted to the area of telangiectatic vessels in the affected eye. Preferential involvement of the right eye may reflect more direct and greater transmission of intrathoracic pressure through the right internal jugular vein than the left.

The association between IMT type 2 and VR may be previously unrecognized due to multiple factors. VR is readily diagnosed by typical history or clinical appearance, and it frequently improves without treatment. Most cases of VR are not associated with pathologic vascular anomalies, and imaging studies seeking those causes are not pursued. Since the hemorrhage obscured the telangiectatic vessels in the affected eye, IMT type 2 could only be concurrently diagnosed by findings from the fellow eye. Lastly, IMT type 2 may be difficult to diagnose without FA, OCT, or fundus autofluorescence in patients with subtle fundoscopic findings and minimal vision loss. An inability to correct vision to 20/20 in a fellow eye with clear media should raise clinical suspicion.

SRNV is an uncommon complication of IMT type 2, and PRH is rarely associated with SRNV. The progression from PRH to SRH in case 1 suggests that the SRNV associated with IMT type 2 may originate from intraretinal neovascularization and descend under the retina over time. The complication of SRNV in IMT type 2 implicates vascular endothelial growth factor in this process and supports the rationale for treatment with agents that block vascular endothelial growth factor for cases with SRNV. Case 3 demonstrates that hemorrhage in IMT type 2 may spread through multiple layers without necessarily being associated with SRNV and may reflect the reduced resistance of the cystic degenerated parafoveal retina in this condition.