Accepted for publication 2 May 2017 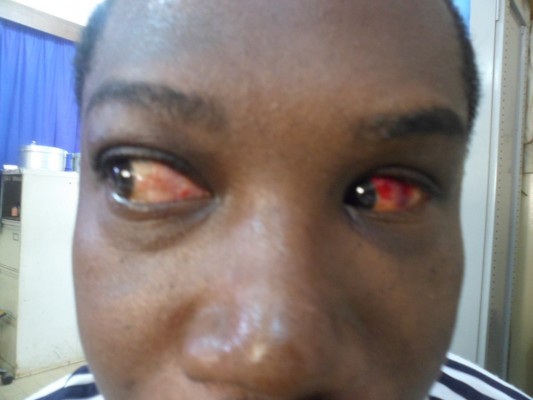 Background: The purpose of this prospective, noncomparative consecutive study was to examine active and retired amateur boxers in order to evaluate the nature and incidence of ocular pathologic conditions related to the boxing practice.
Results: A total of 35 boxers were included in this study. The mean age of the boxers was 28.09±7.57 years (range 18–52 years). Sixteen (45.7%) boxers had >5 years of boxing experience. Fifteen (42.85%) of the boxers reported wearing protective equipment in the bouts and sparring rounds. The number of bouts ranged from 3 to 103, with a median of 20 (interquartile range [IQR] =7–44). The percentages of wins varied from 25% to 100%, with a median of 68.29% (IQR =50.00–79.54). Most of the eye injuries recorded were minor injuries (66.66%), with subconjunctival hemorrhage being the most common (24.24%). Lid scars were the second most common lesion, accounting for 18.18% of all lesions. Sight-threatening eye lesions accounted for 33.34% of injuries and included cataracts (12.12%), lens dislocation (3.03%), pseudoexfoliation syndrome (3.03%), unilateral glaucoma (3.03%), retinal detachment (3.03%), vitreous opacity (6.06%), and lattice degeneration (3.03%).
Conclusion: Boxing-related ocular traumas are common in Cameroon, and ocular surface lesions are the most common injury reported. Severe lesions are indications for premature retirement from boxing practice.

Boxing is a popular combat sport in which opponents administer punches to the anterolateral part of the face, the chest and the abdomen, above the belt line. The eyes and nose are, therefore, the most exposed body parts. Eye trauma in boxing depends on many factors, including the distance of the blow, the power and placement of the fist, and the use of protective equipment.1 Complications related to the practice of this sport are well-documented.2,3 Signs of eye injuries are found in 41% to 76% of boxers.4,5 These injuries can affect all structures of the eye and can result in permanent loss of sight. Classically, three mechanisms have been described to explain eye damage in boxing: direct (coup), indirect (countercoup), and equatorial expansion.6 However, a fourth mechanism namely “suction effect” has been described by Vinger and Capão Filipe.7 Some of these lesions can be ignored, whereas others must be sought for early treatment.4 To the best of our knowledge, no study has previously documented boxing-related eye complications in Sub-Saharan Africa.

The purpose of our study was to highlight the prevalence, nature, and risks of eye injuries in boxers practicing in Cameroon.

This prospective and descriptive study was conducted in the ophthalmology service of the Yaoundé Teaching Hospital (YTH) from June 1 to December 31, 2012. All boxers affiliated with the Cameroon Boxing Federation, whether they were amateurs or professionals, active, or retired, were included in the study. The study was approved by the Research Ethics Board of YTH. Written informed consent was obtained from participants for this study. Written informed consent to publish picture was also obtained from the patient (Figure 1).

The research was in compliance with the Helsinki Declaration. Socioprofessional parameters such as age, gender, boxing experience (number of years of boxing practice), number of fights, the performance of the boxers, and the frequency of training were obtained from the boxer book.

All included boxers underwent a complete ophthalmologic examination, including best-corrected visual acuity (BCVA), intraocular pressure (IOP) taken by aplanation, slit lamp examination of the anterior segment, and examination of the central and peripheral retina after dilation using the Goldmann three-mirror lens. An automatic visual field (a standard, white/white perimetry on a G1 program with dynamics strategy) examination was carried out in cases of glaucoma suspicion (IOP >21 mmHg and or optic disc/cup >4/10). Also, ocular echography mode B was carried out in cases of opacity of the mediums preventing the visualization of the posterior segment.

Of the 48 boxers contacted, 35 (34 amateurs and 1 professional) participated in the ophthalmologic examination and were retained for this study, resulting in a participation rate of 72.91%. Table 1 summarizes the sociodemographic and professional characteristics of our boxers. There were 30 (85.71%) active boxers and 5 (14.29%) retired boxers; there was 1 (2.9%) female boxer. Fifteen (42.85%) of boxers reported wearing protective equipment in the bouts and sparring rounds.

Table 2 summarizes the pathological eye findings. Most of the eye injuries recorded were minor injuries (66.66%), with subconjunctival hemorrhage being the most common (24.24%) (Figure 1). Lid scars were the second most common lesion, accounting for 18.18% of all lesions, followed by posterior synechia (12.12 %) (Figure 2), pupil deformation (6.06%), and angle abnormality (6.06%).

The purpose of this prospective study was to determine the prevalence of ocular damages in boxers in Cameroon. The participation rate for the study was 72.91%. The fear of discovering lesions likely to cause disqualification from boxing and lack of motivation are probable reasons for the low participation rate in this study.

The mean age of our boxers (28.4 years) was higher than the 23.1 years reported by Bianco et al.8 A possible explanation for this difference is the fact that we included retired boxers. In developed countries, boxers often begin their careers at a younger age. The sex ratio reported in the current study can be attributed to sociocultural beliefs.

The average duration of boxing practice in our athletes is short compared to that reported by Hazar et al in Turkey.9 In developed countries, boxers are well-paid, and their medical follow-up is assured. Therefore, they have a long competitive career.

Among the boxers in our study, 85.71% presented a BCVA of 6/6. Our percentage is lower than those of Hazar and Bianco, whose reported rates are 100% and 98%, respectively. This is linked to the nature of observed lesions in our series. It is difficult to estimate the real morbidity of ocular injuries suffered by boxers because some complications can arise when the athlete is retired. Five boxers who presented a monocular blindness should have been disqualified from boxing. Mechanisms to explain ocular damage due to blunt trauma have been well-described in previous studies.6,10

Eye injuries were found in 18 (51.42%) boxers in our series. Our data are lower than those of Giovinazzo et al5 and Wedrich et al,4 whose reported rates are 66% and 76%, respectively. Only amateur boxers are allowed to participate in the Olympic Games. Unlike professional boxers, amateurs must wear a protective helmet and a light sleeveless shirt.

In our context, eye injuries could be mainly attributed to the irregular use of protective measures. Although headgear does not provide complete protection of the eyes, nose, maxilla, and eyebrows, its use should be mandatory during the bouts and sparring rounds in amateur boxing.11,12 In this study, nonheadgear users said that they were not able to buy it. However, they would like to wear it if it prevented injury. Discomfort caused by headgear was the main reason for lack of use reported by Finch et al.13

The high prevalence of subconjunctival hemorrhage may be due to the fact that the study period coincided with a period of intense training related to the preparation for a national boxing championship. In a study involving 956 boxers, Bianco et al also found that subconjunctival hemorrhage and corneal ulcers were the most common eye lesions in boxing.8 Posterior synechia is the result of chronic anterior chamber irritation and is the cause of 2 cases of pupil deformation observed in our series. Cataracts were the leading sight-threatening complications (12.12%) in our study. According to patient age and the unilaterality of this lesion, it was easy to correlate it with boxing. In a series of 74 boxers Giovinazzo et al5 encountered cataracts in 19% of cases. The pathophysiology of postconcussive cataracts is not yet well-understood. Capsular rupture of >2 mm or disruptions of hydroelectric exchanges at the level of the lens have been incriminated.15 The mean age of boxers with a cataract (34.8 years) was significantly higher (P=0.004) than that of those without cataract (26.5 years). However, the mean age of boxers with cataracts is lower than that of patients with cataracts in the general population, which varies from 58 to 62 years, according to surveys carried out in Africa.16,17 This suggests that cataracts may appear earlier in boxers. Pseudoexfoliation syndrome was found in 1 boxer, who presented with a total lens luxation in the contralateral eye. Lens dislocation is, generally, caused by a violent eye trauma or minimal trauma in individuals with preexisting zonula fragility. In the large series of 956 boxers, Bianco et al8 found that a complete or partial dislocation of the lens was present in 3.6% of athletes. The rate of retinal detachment (3.03%) observed in our boxers was close to that reported by Giovinazzo (3%). An equatorial expansion mechanism has been proposed to explain peripheral retinal damage due to blunt traumas.18 Our study revealed 2 cases (6.06%) of angle abnormality. This lesion was associated with unilateral glaucoma in a retired boxer. This is quite low compared with the findings of Giovinazzo et al and Wedrich et al, who, respectively, observed angle abnormalities in 19% and 16% of their series. Previously, Ellong et al19 found that the prevalence of posttraumatic glaucoma related to irido corneal angle injuries in the Cameroonian population was 2.1%. No cases of glaucoma were found in a series of 20 active amateur boxers in Turkey.9

The proportion of boxers with lesions has increased significantly due to many factors. Eye lesions have a deleterious effect on the career of a boxer. In our series, 2 boxers who, respectively, presented a retinal detachment and a total dislocation of the lens prematurely stopped practicing the sport. The strength of this prospective study is the increased awareness of boxing-related eye complications. The limitation of the study are the small sample size (we included 5 retired boxers, just one female and just one professional athlete) and incomplete filling out of the questionnaire concerning the boxing career.

Boxing-related ocular traumas are common in Cameroon. Subconjunctival hemorrhage and superficial lid scars are the most commonly reported injuries. Sight-threatening lesions are indications for premature retirement from boxing practice. We recommend the effective application of preventive measures, including a complete ophthalmological examination at the beginning of the boxing career and subsequent screening eye examinations both during their active career and their retirement period, as well as the mandatory use of suitable protective equipment.

GK, GN-T, and SREM contributed to the study design, analyzed the data, and performed critical revision of the manuscript for important intellectual content. GK, GN-T, and CEM wrote the paper. All authors contributed toward data analysis, drafting and revising the paper, read and approved the final manuscript, and agree to be accountable for all aspects of the work.