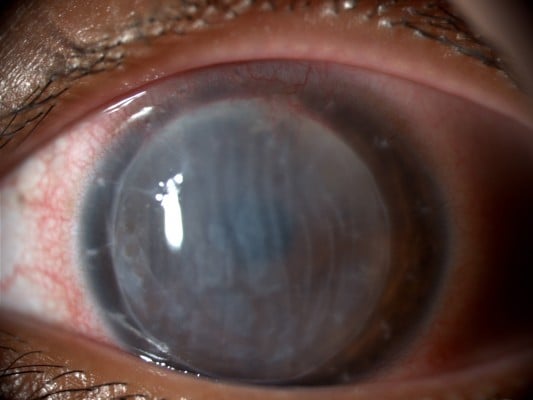 Abstract: Graft rejection is the most significant complication corneal transplantation and the leading indication for overall corneal transplantation. Corticosteroid therapy represents the mainstay of graft rejection treatment; however, the optimal route of administration of corticosteroid remains uncertain. We report herein for the first time the multimodal imaging of a case of long-lasting corneal endothelial graft rejection successfully reversed 3 months after dexamethasone intravitreal implant. A 29-year-old Asian female presented with a long-lasting corneal endothelial graft rejection in her left phakic eye. She underwent penetrating keratoplasty for advanced keratoconus 24 months before presentation. Hourly dexamethasone eyedrops, daily intravenous methylprednisolone, and one parabulbar injection of methylprednisolone acetate were administered during the 5 days of hospitalization. However, the clinical picture remained approximately unchanged despite therapy. By mutual agreement, we opted for the off-label injection of dexamethasone 0.7 mg intravitreal implant in order to provide therapeutic concentrations of steroid for a period of ~6 months. No other concomitant therapies were prescribed to the patient. Visual acuity measurement, slit lamp biomicroscopy, anterior segment photography, confocal microscopy, anterior segment optical coherence tomography, laser cell flare meter, intraocular pressure measurement, and ophthalmoscopy were performed monthly for the first postoperative 6 months. Three months after injection, both clinical and subclinical signs of rejection disappeared with a full recovery of visual acuity to 20/30 as before the episode. Currently, at the 12-month follow-up visit, the clinical picture remains stable without any sign of rejection, recurrence, or graft failure. Dexamethasone intravitreal implant seems to be a new potential effective treatment for corneal graft rejection, particularly in case of poor compliance or lack of response to conventional treatment. In addition, it could be especially useful in diabetic patients unable to receive systemic steroids.

Graft rejection is a complex immune-mediated process representing the most significant complication and the leading indication for overall corneal transplantation. Its incidence and prognosis depend on the affected corneal layer and the type of corneal transplant.1,2 Penetrating keratoplasty represents the most risky procedure among all corneal grafting due to the presence of endothelium. In addition, endothelial immune reaction is the most severe form of rejection because the destruction of the graft endothelium can lead to graft failure. Corticosteroid therapy represents the mainstay of corneal graft rejection treatment. The optimal route of administration of corticosteroid remains unknown and many different approaches, such as systemic, topical, ­subconjunctival, and intraocular, have been proposed and used with variable rate of success.3–6 To our knowledge, this is the first report describing multimodal imaging of long-lasting corneal endothelial graft rejection successfully reversed 3 months after dexamethasone intravitreal implant.

A 29-year-old Asian female presented with an immunological corneal endothelial graft rejection in her left phakic eye. Twenty-four months before the time of presentation, she underwent penetrating keratoplasty for the treatment of acute corneal hydrops as a complication of advanced keratoconus. Postoperative course had been regular although the patient did not attend follow-up regularly and did not turn up to several scheduled visits. The 16-bite single running suture was removed 12 months after the surgery. Two months later, best spectacle-corrected visual acuity was 20/30 with a refraction of sphere –2.50 cylinder –4.50/90°. At the time of presentation to the emergency ward, the patient suffered from redness, pain, photophobia, and foreign body sensation in the operated eye. Visual acuity dropped to hand motion. Slit lamp biomicroscopy with anterior segment photography at a magnification of ×16 showed intense conjunctival hyperemia and severe corneal edema with diffuse Descemet’s folds (Figure 1). Intraocular pressure was 16 mmHg. Confocal microscopy (HRT II Rostock Cornea Module; Heidelberg Engineering GmbH, Heidelberg, Germany) showed increased number of dendritic cells at the level of the corneal subbasal nerve plexus and strongly hyper reflective stromal cells likely representing keratocytes in a particular state of metabolic activation induced by proinflammatory cytokines (Figure 2). Anterior segment optical coherence tomography (Visante AS-OCT; Carl Zeiss, Jena, Germany) showed increased central corneal thickness equal to 870 μm. Laser cell flare meter (Kowa 500F; Kowa, Tokyo, Japan) counted 45.36 photons/ms. Ophthalmoscopy was not possible due to corneal opacity. Intensive questioning of the patient revealed that rejection’s signs and symptoms had appeared at least 3 weeks before the time of presentation, but she had underestimated the episode and did not refer to any ophthalmologist. We made the diagnosis of endothelial corneal graft rejection and according to our standard treatment protocol, we admitted the patient to the department. Briefly, dexamethasone eyedrops were instilled every hour for the first 72 hours and then continued according to clinical response; intravenous methylprednisolone (500 mg) was infused daily for 5 days. One parabulbar injection of methylprednisolone acetate was performed at the time of hospitalization (Depo-Medrol 40 mg/mL, Pfizer, Inc., New York, NY, USA).

The clinical picture remained approximately unchanged after the first 5 days of treatment. Before discharging the patient, we discussed with her all the available treatment strategies because we were aware of the possible poor adherence to the domestic topical therapy. By mutual agreement, we opted for the injection of dexamethasone 0.7 mg intravitreal implant (Ozurdex; Allergan, Inc., Irvine, CA, USA) in order to provide therapeutic concentrations of steroid for a period of ∼6 months. No other concomitant therapies were prescribed to the patient. The “off-label” use of ­dexamethasone implant was clearly explained to the patient. She read, understood, and signed an informed consent form before the surgical procedure. Written informed consent was also obtained from the patient for the publication of this case report and any accompanying images. Institutional Review Board approval was not deemed necessary for this off label treatment. However, all principles outlined in the Declaration of Helsinki were followed. The injection was well tolerated and the patient was discharged the day after. The patient underwent monthly postoperative visits for the first 6 months. After 1 month, conjunctival hyperemia disappeared and corneal transparency improved (Figure 3). Visual acuity partially recovered to 20/50, and central corneal thickness decreased to 680 μm. Flare meter counted 31.32 photons/ms. Confocal microscopy showed reduced number of ­dendritic cells and mildly activated keratocytes. After 3 months, best-corrected visual acuity fully recovered to 20/30 with a refraction of sphere –3 cylinder –4.50/100°. Corneal transparency fully recovered with few residual Descemet’s folds not involving the visual axis (Figure 4). Central corneal thickness decreased to 590 μm; flare meter counted 18.12 photons/ms. Confocal microscopy showed dendritic cells and slightly activated keratocytes within the physiological range (Figure 5). Specular microscopy (SP-3000P; Topcon, Tokyo, Japan) counted 662 cells/mm2. Currently, at the 12-month follow-up visit, the clinical picture remains stable without any sign of rejection, recurrence, or graft failure. Intraocular pressure was stable within normal range, and lens remained transparent during the entire follow-up.

Corneal transplant has become the most frequent allograft in human medicine. The primary cause of corneal allograft failure is immune-mediated rejection characterized by delayed-type hypersensitivity to donor alloantigens and leukocytic cellular infiltration of the graft site. Graft rejection is classically considered an acute episode, although recent studies have demonstrated that cellular activation could be detected by confocal microscopy and specular microscopy before the episode, potentially predicting its onset.7,8 There is significant variability among practitioners in prevention and treatment of allograft rejection. Corticosteroid therapy remains the ­mainstay of immunosuppression for rejection treatment, although the optimal route of administration remains uncertain. In the case presented, we opted for a therapeutic strategy that would allow us to avoid the risk of poor compliance of the patient in frequently instilling eye drops and attending tight follow-up visits. Dexamethasone intravitreal implant has the advantage to reach prolonged intraocular therapeutic concentration with only one injection and with no need of surgical removal. It has been approved in Europe as a first-line therapy for the treatment of macular edema secondary to retinal vein occlusion, diabetes, and noninfectious posterior uveitis.9–11 In addition, it has already been demonstrated to be safe for corneal endothelium health with no detrimental effects on cell size, shape, and number.12 To the best of our knowledge, this is the first report of multimodal imaging in a case of long-lasting endothelial corneal graft rejection successfully reversed after dexamethasone intravitreal implant. Two recent studies reported its use in corneal rejection, but the clinical pictures of the treated patients were milder, treatment was prompt, and no additional imaging apart from anterior segment photograph was performed.13,14 On the contrary, in the case reported here, the corneal rejection was long lasting due to late patient referral to ophthalmologist. Delayed treatment has been demonstrated to be a poor prognostic factor for the recovery of corneal transparency after rejection resolution.15 However, corneal transparency was almost fully recovered within 3 months with only few residual Descemet’s folds not impairing visual acuity. In addition, other subclinical signs of inflammation evaluated by multimodal imaging reversed in the same time interval. In particular, the density of corneal dendritic cells, evaluated by confocal microscopy and considered as the most sensitive index of inflammation promptly responsive to changes in ocular surface inflammatory activity, returned within normal range after the injection.

However, current endothelial cell count is low and the risk of future graft failure cannot be neglected. No adverse events related to the steroid injection were recorded, and in particular intraocular pressure was stable and lens remained transparent during the entire follow-up.

The major limitations of the case presented here are the off-label use of dexamethasone and the lack of data regarding drug concentration in aqueous humor and vitreous.

In conclusion, dexamethasone intravitreal implant seems to be a new potential effective treatment option for corneal graft rejection, particularly in cases of poor compliance or lack of response to conventional treatment. In addition, it could be especially useful in diabetic patients unable to receive systemic steroids.

GG and AP have made substantial contributions to the ­conception, design, acquisition, analysis, and interpretation of the case report and have been involved in drafting the article.

MF and PV have made substantial contributions to the conception and design of the case report and have been involved in revising it critically for important intellectual content.

All the authors read and approved the final manuscript.