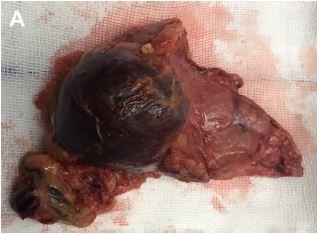 Introduction: An epidermoid cyst in an intrapancreatic accessory spleen (ECIPAS) is a rare non-neoplastic cyst, typically occurring in the pancreatic tail. It is difficult to preoperatively differentiate ECIPAS from other types of pancreatic neoplastic cysts.
Case presentation: We herein report a case of a 32-year-old man with a cystic tumor in the tail of the pancreas. The patient underwent a laparoscopic spleen-preserving distal pancreatectomy, and histological examination revealed the presence of ECIPAS. In addition, we also performed a literature review of 42 case reports of ECIPAS.
Conclusion: Although the preoperative diagnosis of ECIPAS is relatively difficult, familiarity with the imaging features, the clinical presentation and the location of the cyst could lead to a correct preoperative diagnosis of ECIPAS, which might thereby reduce the number of unnecessary resections.

An epidermoid cyst in an intrapancreatic accessory spleen (ECIPAS) is extremely rare, with the prevalence of 1.7% in general population.1 The differential diagnosis of pancreatic cystic lesions is often challenging because of their similar findings on imaging. It is difficult to preoperatively differentiate ECIPAS from the “other” cystic neoplasms, such as a pancreatic pseudocyst, serous cystic neoplasm, mucinous cystic neoplasm, intraductal papillary mucinous neoplasm and lymphoepithelial cyst, or a solid pancreatic tumor, such as a pancreatic neuroendocrine tumor and solid pseudopapillary tumor, by using conventional imaging. Of the 51 cases of ECIPAS that have been reported in the English literature, only 5 cases were correctly diagnosed based on preoperative imaging.2–43 As ECIPAS is a non-neoplastic pancreatic cyst and has no malignant potential, a correct preoperative diagnosis could thereby reduce the number of unnecessary surgical resections of the pancreas. Herein, we report a case of a 32-year-old male with an ECIPAS and make a comprehensive review of the literature.

A 32-year-old male was admitted to The First Affiliated Hospital with a mass lesion on the pancreatic tail that was detected by abdominal ultrasound during an annual health checkup. No history of trauma or pancreatitis was recorded. He had normal vital signs and abdominal examination. Initial laboratory data also showed no abnormalities, including those for tumor markers such as carcinoembryonic antigen (CEA) or carbohydrate antigen 19-9 (CA19-9). Abdominal computed tomography (CT) revealed a well-defined cystic neoplasm, which was located in the tail of pancreas and approaching to splenic hilum (Figure 1A), without enhancement in the arterial phase (Figure 1B) and the portal phase (Figure 1C). Additionally, endoscopic ultrasonography (EUS) showed a 3.5 cm multilocular cystic lesion in the pancreatic tail with an internal nodule (Figure 1D). The cystic tumor did not communicate with the main pancreatic duct.

Upon diagnosis of mucinous cystic neoplasms, the patient underwent a laparoscopic spleen-preserving distal pancreatectomy. Macroscopic analysis revealed that the mass in the tail of the pancreas was 4 cm at its greatest diameter and consisted of parenchymal and cystic components (Figure 2A). The gross pathology showed a well-demarcated, multilocular mass, containing colorless serous fluid. Microscopic analysis revealed a multilocular cyst surrounded by accessory splenic tissue in the pancreas parenchyma, and the cyst wall showed a thin multilayered squamous epithelium (Figure 2B). The final pathological diagnosis was epidermoid cyst originating from an intrapancreatic accessory spleen. His postoperative course was uneventful and he was discharged 8 days after the surgery.

The study was approved by the ethics committee of The First Affiliated Hospital of Zhejiang University School of Medicine. Written informed consent was obtained from the patient to have the case details and any accompanying images published.

Accessory spleens occur in ~10% of the population and can be found in various anatomic locations other than the splenic hilum. Approximately 20% of accessory spleens occur in or around the tail of the pancreas.1 Epidermoid cysts of the spleen are rare entities, comprising <10% of true non-parasitic splenic cysts.44 An ECIPAS is extremely rare, with only a few reports describing their clinical characteristics. Currently, with the advancement of imaging techniques, such as CT, magnetic resonance imaging (MRI) and EUS, an increasing number of ECIPASs have been detected.

Since Davidson et al2 reported the first case of ECIPAS in 1980, 41 articles and 50 patients have been reported in the English literature (Table 1). Including the present case, 20 cases were men and 32 cases were women. The mean age of the patients was 45.4 years (range 12–70 years), and 32 cases (61.5%) were younger than 50 years. Additionally, >50% of the cases were incidentally detected,6,7,10,12,13,16,17,19–22,24–26,29–31,33,35,39,41–43 while the other symptoms included nausea, vomiting, abdominal pain and discomfort, back pain, epigastric pain and fever. In all cases, the tumors were located on the pancreatic tail. The cyst appeared to be multilocular in 31 cases and unilocular in 14 cases (no information for 7 cases). The average cyst size was 4.3 cm (range 1.4–15 cm). As ECIPAS occurs at a relatively young age and it is located in the pancreatic tail, it is always necessary to differentiate ECIPAS when identifying a pancreatic tail cystic mass in young patients.

Most cases of ECIPAS are diagnosed after surgical resection based on the pathological characteristics. A preoperative imaging diagnosis of an ECIPAS is extremely difficult. Only 5 cases (9.8%) among the 51 reported cases were diagnosed preoperatively, while 1 out of 5 cases correctly diagnosed preoperatively was followed up without resection. Notably, in the present case, abdominal CT and EUS also revealed pancreatic mucinous neoplasm. As there are no characteristic features to define the lesion on radiology, it is difficult to entirely differentiate the cystic pancreatic malignancy prior to surgery and histopathological examination.

Until now, few studies have reported the imaging characteristics of ECIPAS. Hu et al45 noted that an accessory spleen surrounding the cyst was a key component for correct diagnosis, and therefore the relationship of enhancement between the splenic parenchyma and the parenchymal component of the lesion for the differential diagnosis of a cystic mass in the pancreatic tail was important. Itano et al21 described that 8 of 13 cases showed a solid tumor component upon CT or MRI, and several reports mentioned retrospectively that the images of the solid component were similar to those of the spleen. In our review, a diagnosis of a mucinous cystadenoma, cystadenocarcinoma, pseudocyst, neuroendocrine tumor or a potential malignant tumor was suspected in most cases.21 Interestingly, 3 out of 52 cases were diagnosed as ECIPAS preoperatively based on the similar density in the solid component and spleen on CT or MRI.21,37,43 Furthermore, Motosugi et al46 suggested that superparamagnetic iron oxide-based (SPIO) MRI was the most reliable tool for identifying an ECIPAS, because reticuloendothelial tissues including spleen took up SPIO and the signal intensity of the tissues changes (drops). Unfortunately, our patient did not receive MRI examination preoperatively. All the findings suggest that, in the presence of a relatively large amount of splenic tissues, a correct diagnosis would be possible based on a careful examination of images prior to surgery. However, relatively small amounts of splenic tissues may not be useful in the diagnosis. Therefore, ECIPAS should be considered in the differential diagnosis of pancreatic cystic lesions.

Until now, the treatment of ECIPAS consists of follow-up and surgical removal, including open or laparoscopic surgery with or without splenic preservation. No death has been reported during operation or in the short-term postoperative period. Fujii et al41 suggested that laparoscopic distal pancreatectomy could be a useful, minimally invasive surgical approach for treating pancreatic cysts as well as for the treatment of benign or low-grade malignant tumors located in the pancreatic body or tail. As ECIPAS was reported not to have malignant potential, a correct preoperative diagnosis could thereby avoid unnecessary surgery.

An ECIPAS is an extremely rare disease entity. Enhancing the cystic wall of ECIPAS similar to the spleen was a helpful feature. To prevent any unnecessary surgical intervention, it is important to recognize the ECIPAS as the differential diagnosis of pancreatic cyst. Familiarity with the imaging features, the clinical presentation and the location of the cyst will help radiologists make a more confident diagnosis. Thus, making a definite preoperative diagnosis in most cases is possible.