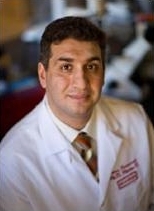 Dr Faris Farassati is an Associate Professor at the University of Kansas Medical School and the director of the Molecular Medicine Laboratory at this institute. He is a translational cancer scientist focusing on intervention with pro-oncogenic cell signaling machinery in order to treat human malignancies. Therapeutic targets which are identified to be "Cancer-Specific" will be pursued by both gene and drug therapy methods by Dr Farassati's team towards designing a comprehensive translational strategy. Transcriptional targeting of Oncolytic Viruses is a major focus of research for Dr Farassati's group. Ras signaling pathway, as the most important pro-oncogenic signaling pathway involved in generation of human cancers, has been defined as a target for a mutant versions of Herpes Simplex Virus-1(HSV-1). This Ras-Smart virus is named as "Signal-Smart 1" or SS1 virus. Other versions of Oncolytic Viruses developed in this lab include HSV-1 mutants capable of targeting Cancer Stem Cells (CSCs) in a cell-specific manner. These viruses are being developed with the purpose of eliminating CSCs as the main fraction of cells within tumors in charge of repopulating tumors and maintaining different cell types which compose the histological structure of the tumor. Since no therapies currently exist to specifically target CSCs, development of Oncolytic Viruses with such ability can deliver significant potentials for highly effective cancer therapy.

Dr. Tommy Alain is a Scientist at the Children’s Hospital of Eastern Ontario Research Institute (CHEO RI), and an Assistant Professor of Biochemistry, Microbiology and Immunology at the University of Ottawa, Ottawa, Canada. His training is in virology, innate immune responses, cell biology, and oncology. Dr. Alain received his B.Sc. (2000) in Biochemistry from University Laval in Quebec City, Canada, and his Ph.D. (2007) in Medical Science from the University of Calgary, Canada. During his Ph.D. research, Dr. Alain studied the virology and the oncolytic potencies of reovirus, vesicular stomatitis virus, herpes simplex virus and myxoma virus against brain cancers at the University of Calgary. From 2007 to 2013, Dr. Alain pursued post-doctoral work at McGill University studying mRNA translational control and the mammalian target of rapamycin (mTOR) signaling pathway, linking both viral immunity and oncology research. His current research in Ottawa focuses on exploiting translation initiation factors and downstream effectors of mTOR complex 1 to modulate innate immune responses to oncolytic viruses, and to augment the anti-proliferative efficacies of cancer therapeutics. Dr. Alain is a member of the Canadian Oncolytic Virus Consortium, a group of scientists from across Canada that seeks to understand, improve, and develop oncolytic viral immunotherapies for the treatment of cancer. 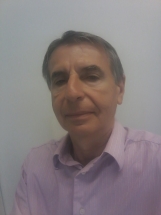 The genetic contribution in the development of neural tumors was one of the first targets of his research starting at NIH with the investigation of the cell of origin of retinoblastoma. During his tenure at the MDACC, he was heavily involved in characterization of various genetic abnormalities in gliomas and their prognostic significance. Furthermore, a major direction of his research was shaped towards using the genetic abnormalities in gliomas to develop possible gene therapies, employing adenoviruses carrying tumor suppressor genes.  In addition, he developed during 1995-1999 a mutant adenovirus (Delta-24) capable of infecting and killing glioma cells but with no harm to normal brain cells. This virus which was developed with the help of a postdoctoral fellow in his lab, Dr. Juan Fueyo, is currently in clinical trials in cancer patients.

His recent research is focusing on the contribution of a superfast cell cycle analysis by flow cytometry during surgery that could differentiate low-grade from high-grade gliomas and benign from atypical/anaplastic meningiomas. Based on this work, his research group is interested in the development of a device which in real-time could determine the tumor margins during surgery, a possible breakthrough in intraoperative guidance for brain tumor removal.

She was awarded the Excellence in Research Award from the American Society of Gene Therapy in 2002 and Excellent Professor in Research Achievement from Yonsei University in 2003, 2005, 2007, 2008, and 2011. She received the Bowon Award for Best Research Activity from Yonsei University in 2007. She also was awarded the Excellence in Research Award from Korean Society of Gene Therapy (2011, 2012, and 2014) and Korean Government Ministry award from Ministry of Science (2013). Her research interests include cancer gene therapy, immunotherapy, angiogenesis, combination of viral vectors and non-viral vectors, nanomedicine, and tumor biology. One of her gene therapeutics is in clinical trials against cancer patients.