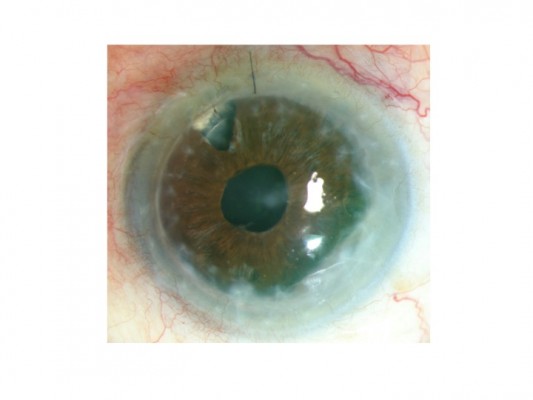 Purpose: The aim of this study was to describe intraoperative optical coherence tomography (OCT) as an adjunctive device for peripheral synechiolysis in a post-penetrating keratoplasty patient.
Case report: A 75-year-old female patient presented for follow-up 9 months after a penetrating keratoplasty in the left eye. She presented with anterior peripheral synechiae involving the graft for three clock hours. Peripheral native cornea appeared totally opaque. Synechiolysis was planned, and intraoperative OCT allowed us to detect nonclinically visible synechiae and to confirm complete synechiolysis immediately after surgery. No postoperative complication was recorded. Two months after surgery, the graft was clear and anterior segment OCT did not reveal any residual synechiae or recurrence.
Conclusion: Intraoperative OCT is useful to overcome the difficulties in visualization through clinically opaque corneas, as it gives real-time feedback upon the anatomy, the extension of the remaining lesions, and the success of the surgery.

Optical coherence tomography (OCT) is a high-resolution imaging modality used to image the anterior segment, first described in 1994.1 High-speed OCT provides in vivo cross-sectional images of the anterior eye, similar to histological sections, and could be a potential tool for noninvasive evaluation of the anterior chamber angle,2 especially in cases of corneal opacity.

Intraoperative real-time microscope-integrated OCT (iOCT) is an emerging modality with the potential to revolutionize the surgical techniques by providing a real-time dynamic feedback of the tissue alterations during surgery.3,4 In 2014, the PIONEER study described the feasibility, utility, and safety of iOCT in ophthalmic surgery and showed that the tool impacted surgical decision in >40% of the cases.3 iOCT has already been described in DMEK and DSAEK surgeries with advanced bullous keratopathy.5–7

Although management of peripheral anterior synechiae (PAS) after PK is not clearly defined in the literature, clinicians often tend to surgically treat this condition, in order to avoid complications such as glaucoma and graft rejection.

We describe here the first case of iOCT-guided synechiolysis in a patient with peripheral corneal opacity after a PK.

A 75-year-old female patient presented for follow-up 9 months after a PK in the left eye.

She had undergone a deep sclerectomy for open-angle glaucoma 12 years prior to the keratoplasty followed by cataract surgery 3 years later and a Baerveldt tube implantation, due to medically uncontrolled intraocular pressure, 5 years later. Implantation of the Baerveldt tube was performed in the sulcus to avoid any corneal touch. She had also been treated for recurrent anterior uveitis. Uveitic workup was negative for sarcoidosis, syphilis, lyme, and tuberculosis. As herpetic origin could not be excluded, patient was treated with prophylactic systemic valaciclovir to avoid recurrence.

One year after the last surgery, patient presented with endothelial decompensation and stromal edema. A DMEK was performed under local anesthesia, without any intraoperative complication. Postoperative treatment consisted of dexamethasone and ofloxacin drops four times a day. Valaciclovir was continued. One month after surgery, the patient presented with total corneal opacification, stromal edema, and graft failure. After 2 months, she developed anterior stromal fibrosis. A PK was planned. A 7.75 mm graft was sutured after a 7.5 mm trephination. The postoperative treatment included dexamethasone and tobramycine drops (Tobradex®; Alcon, Fort Worth, TX, USA) six times a day. Valaciclovir was continued. No postoperative complication was recorded for the first 9 months.

Nine months after the surgery, the patient presented with anterior peripheral synechiae involving the graft for three clock hours. Peripheral native cornea appeared totally opaque (Figure 1). Graft was clear with no sign of rejection. Anterior chamber was calm, with no sign of recurrent uveitis. Intraocular pressure was 15 mmHg.

Because of the history of uveitis, synechiolysis was planned. Surgery was performed under local anesthesia and was assisted by Leica enfocus Ultra deep OCT (Leica Microsystems, Wetzlar, Germany), which delivers high definition real-time images of the anterior segment. Due to peripheral corneal opacification, anterior synechiae could not be properly seen with slit lamp microscopy or operative microscope. Intraoperative OCT allowed us to detect nonclinically visible synechiae and to confirm complete synechiolysis immediately after surgery (Figure 2). Synechiolysis was performed using a viscoelastic cannula (Viscoat®, Alcon, Fort Worth, USA) and an ophthalmic dispersive device (Viscoat).

No postoperative complication was recorded. Postoperative treatment included tobramycine and dexamethasone drops six times a day for 3 months with progressive tapering. Valaciclovir was continued 1 g three times a day for 1 month and then tapered weekly until 500 mg per day. Two months after the surgery, vision was 0.2 limited by advanced glaucomatous neuropathy. The graft was clear and anterior segment OCT (Spectralis, Heidelberg, Germany) did not reveal any residual synechiae or recurrence.

Written informed consent has been provided by the patient for the publication of her case details and images.

We describe a case of synechiolysis intraoperatively guided by OCT. The device allowed good quality images of the anterior segment, even in the presence of corneal opacification, as infrared illumination used by the device scatters less than light used by microscopes.7 iOCT helped localize the synechiae, facilitated the synechiolysis, and confirmed complete synechiolysis at the end of the procedure. Without the device, operative strategy would be planned differently. Anterior segment OCT would be performed preoperatively, and synechiae position would be marked.

iOCT has already been described in anterior segment surgery, especially for lamellar keratoplasty such as DMEK and DSAEK.3,5–7 In DMEK, iOCT has been reported to help in graft rotation without touching the graft as well as graft orientation.5,6 In DSAEK surgery, iOCT has been reported to help in graft–host interactions and to verify the presence or absence of fluid interface.7 For both surgeries, iOCT may expand their indications and diminish the need for PK, which is a more invasive surgery with a higher comorbidity rate. The actual impact on overall surgical time has been studied and appears to be generally minimal.3

However, this device has still some limitations: distortion of the images during eye movements and restriction of the scanning zone necessitate frequent adjustment of the viewing field during surgery. Automated tracking would be a welcome addition to facilitate rapid imaging of the region of interest and to minimize surgeon burden of manual adjustment.10 Moreover, metallic instruments create difficulties for intraoperative OCT systems due to the light scattering and shadowing characteristics of metal, which render underlying tissue invisible.10

Despite these limitations, it seems that iOCT is a valuable device in order to overcome the difficulties in visualization through clinically opaque corneas.

To the best of our knowledge, this is the first report of intraoperative OCT-guided anterior synechiolysis.