Back to Journals » International Journal of Nanomedicine » Volume 12 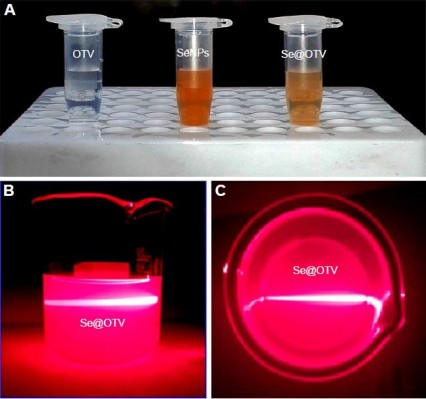 Abstract: As an effective antiviral agent, the clinical application of oseltamivir (OTV) is limited by the appearance of drug-resistant viruses. Due to their low toxicity and excellent activity, the antiviral capabilities of selenium nanoparticles (SeNPs) has attracted increasing attention in recent years. To overcome the limitation of drug resistance, the use of modified NPs with biologics to explore novel anti-influenza drugs is developing rapidly. In this study, OTV surface-modified SeNPs with superior antiviral properties and restriction on drug resistance were synthesized. OTV decoration of SeNPs ([email protected]) obviously inhibited H1N1 infection and had less toxicity. [email protected] interfered with the H1N1 influenza virus to host cells through inhibiting the activity of hemagglutinin and neuraminidase. The mechanism was that [email protected] was able to prevent H1N1 from infecting MDCK cells and block chromatin condensation and DNA fragmentation. Furthermore, [email protected] inhibited the generation of reactive oxygen species and activation of p53 phosphorylation and Akt. These results demonstrate that [email protected] is a promising efficient antiviral pharmaceutical for H1N1.

The influenza virus is still a serious highly contagious pathogen and affects millions of people in seasonal epidemics.1–3 H1N1, which belongs to influenza A type viruses, is a highly infectious respiratory disease.4 Influenza H1N1 was discovered and identified in Mexico in 2009, and resulted in more than 8,768 deaths in 207 countries.5 There are many ways to spread H1N1 influenza, eg, sneezes, coughs, and contaminated materials. Through rising mutation of the genome and antigenic shifts in different species, the influenza virus has high variability, which may emerge as a novel influenza among humans in the future. There are several steps in the influenza-infection cycle.6–8 Hemagglutinin (HA) plays an important role in viral infection by combining sialic acid-containing receptors on host cells and mediating the entry and fusion of the virus.9,10 Neuraminidase (NA) and HA are the most significant glycoproteins on the surface of the influenza virus.11,12 NA plays an important role in assisting the virus cleave the linkage between sialic acid and HA, when mature viruses separate from the host cell surface.13 Vaccination is a common method of restraining the spread of influenza infections.14 Nevertheless, there is a long period between rapid virus evolution and vaccine development.15 Several antiviral drugs have been developed in the infection cycle. Existing antiviral drugs are amantadine and oseltamivir (OTV).16 OTV is a transition-state sialic acid analogue against influenza N2 NA,17 and functions as a primary antiviral drug that blocks the release of new virions from cell membranes to afford resistance to influenza A.18 However, these synthetic drugs have resulted in the emergence of drug-resistant strains, which cause trouble to humans.19 Therefore, antiviral therapies should promote control of the pandemic influenza A virus.

Due to their unique chemical and physical properties, nanomaterials have emerged as new antimicrobials.20,21 Pinto et al reported that functionalized multivalent gold nanoparticles (NPs) inhibited the attachment and spread of HSV1.22 Consensus M2e peptide conjugated to gold NPs presents a promising material against H3N2, H1N1, and H5N1 influenza A viruses.23 Virus inhibition has been induced by polyvalent NPs of different sizes.24 Meanwhile, immunization against viral infections by the potential of NPs was reported by Sokolova et al.25 SiO2@LDH NPs as an adjuvant to enhance the response of hepatitis B DNA vaccine was reported by Wang et al.26 Specific interaction for potential bioapplications through efficient encapsulation of Fe3O4 NPs into genetically engineered hepatitis B core virus-like particles was reported by Shen et al.27 In addition, silver NP treatment ameliorates biliary atresia syndrome in rhesus rotavirus-inoculated mice.28

Selenium NPs (SeNPs) have attracted considerable attention with their unique antimicrobial activities.29–31 Selenium is an essential nutritional trace element regulated by cellular redox homeostasis,32–34 and is an integral component of several selenoproteins that control several crucial biological processes, such as reactive oxygen species (ROS) elimination and specific enzyme modulation.35–37 A deficiency in selenium can result in susceptibility to infections, including respiratory virus infections.38 Furthermore, SeNPs have been developed to suppress hepatitis B virus replication and transcription.39 In this study, we wished to explore novel SeNPs that might interfere with the interaction between H1N1 virus and host cells. We look forward to verifying that OTV-modified SeNPs ([email protected]) have excellent antiviral activity against H1N1 virus infection. The redox imbalance is associated with many pathologies. The ROS play an important role in many physiological processes.40,41 An imbalance of redox is implicated in many pathologies, such as cancer, diabetes, and other diseases.42 Several research groups have described the antimicrobial effects of SeNPs, but reports on their antiviral mechanisms are sparse. Therefore, this study was to investigate whether [email protected] can reverse H1N1 influenza virus-induced MDCK-cell apoptosis.

SeNPs were synthesized as follows. Briefly, 0.25 mL of stock solution (0.1 M) of Na2SeO3 was gradually added into 2 mL stock solution (50 mM) of vitamin C. Then, 80 μL (100 nM) of OTV was added into the SeNP solution. Excess OTV, vitamin, and Na2SeO3 were removed by dialysis for overnight. [email protected] were sonicated and then filtered through 0.2 μm pores. The concentration of SeNPs and OTV was measured by inductively coupled plasma atomic-emission spectroscopy.

The cytotoxicity of [email protected] was assessed by cell viability as previously described.44 H1N1 influenza virus was incubated for 2 hours, and virus that had not been internalized was rinsed for removal. OTV with or without SeNPs was added to MDCK cells for 24 hours. Then, MTT (20 μL/well) was added for 5 hours. Formazan crystals were dissolved by adding 150 μL/well dimethyl sulfoxide and recorded at 570 nm absorbance.

[email protected] H1N1 was detected with TEM.1 [email protected] were treated with H1N1 influenza virus and then attached to a carbon-coated collodion grid. Grids were examined with TEM. MDCK cells were infected with H1N1 for 2 hours. Cell-culture supernatants were harvested after 48 hours, and HA titer measured as previously described.45 The NA activity of the influenza virus was determined by quantifying the intensity of fluorescence, as previously described.5

All data in this study are presented as means ± SD. Differences with P<0.05 or P<0.01 were considered statistically significant.

The cell viability of H1N1 was 36%, and OTV and SeNPs increased viability to 53% and 60%, as shown in Figure 5A. However, the cell viability of [email protected] was significantly increased to 93%. The results suggest that the antiviral activity of SeNPs was effectively amplified by OTV. As shown in Figure 5B, cells treated with H1N1 showed cytoplasmic shrinkage, loss of cell–cell contract, and reduction in cell numbers. MDCK-cell morphology was changed slightly by cotreatment with [email protected], and appeared healthy, with regularity in shape. Synergy was evaluated by calculation of in vitro fractional inhibitory concentration-index values: minimum inhibitory concentration (MIC) of drug A combination present in [email protected] of Se (125 μM); MIC of drug B combination present in [email protected] of OTV (0.3 nM); MIC of drug A alone corresponded to free SeNPs (1 mM); MIC of drug B alone corresponded to free OTV (1 nM). Fractional IC (FIC) was calculated as (MIC drug A combination/MIC drug A alone) + (MIC drug B combination/MIC drug B alone) =125 μM/1 mM +0.3 nM/1 nM =0.425. FIC was 0.425, below 0.5, indicating synergy. In this study, the FIC index was basically interpreted as follows: FIC <0.5, synergy; FIC 0.5–2, indifference; FIC >2, antagonism. The results suggest that [email protected] effectively inhibited the proliferation of H1N1 (Table 1).

Identification of HA and NA by [email protected]

As shown in Figure 10A, microvilli and mitochondria were observed with no morphological changes in untreated cells. When incubated with H1N1, TEM indicated a shrinking cytoplasm, distorted organelles, and condensed chromatin, which indicated apoptosis of MDCK cells (Figure 10B). The mitochondria of MDCK cells recovered their shape after treatment with [email protected], indicating that H1N1 induced apoptosis (Figure 10C).