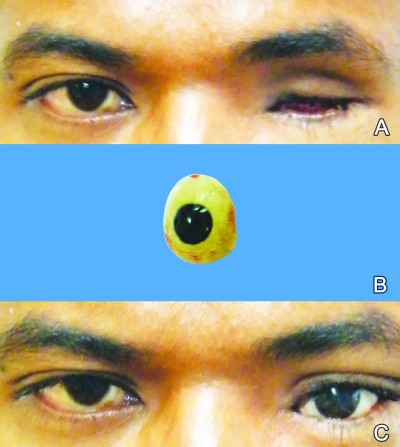 The dermis-fat graft has been used as an orbital implant in primary enucleation, secondary implants, and tissue augmentation in a contracted socket.3,6–9 In developed countries, most surgeons prefer to use a porous polyethylene implant.10,11 On the other hand, in Thailand, surgeons use both nonporous and porous orbital implants in enucleation and evisceration. Regarding implant exposure, surgical management depends on the defect size, type of orbital implant, and duration of orbital implant exposure.12 The exposure size should be less than 3 mm, and the observation may be adequate. In case of larger exposures, the use of a Müller muscle flap and tarsal patch-flap is recommended.13–15 However, when the defect size is very large, surgeons usually perform a dermis-fat graft for anophthalmic socket reconstruction.16,17

This is a retrospective interventional case series containing data collected between August 1, 2007 and July 31, 2012. Institutional review board/ethics committee approval was obtained at Songklanagarind Hospital, and this study adhered to the tenets of the Declaration of Helsinki.

We included patients who underwent either primary or secondary dermis-fat grafts for the first time. We reviewed the medical records of these patients to obtain the following data: demographics, duration of symptoms, indications for the dermis-fat graft, and postoperative conditions for eye prosthesis wear and cosmesis. The patient satisfaction (obtained via interviews) with the cosmetic result was classified as good, fair, or poor. Experienced surgeons performed the graft on 24 cases and inexperienced ones on 17 cases.

All of the four patients who underwent the combined procedure (dermis-fat graft with mucous-membrane graft) had an inadequate fornix, intraoperatively following the dermis-fat graft. Therefore, a mucous membrane was added to deepen the fornix, and the size of the defect was measured. The mucosal surface of the lip was marked and injected by a 1:1 mixture of 1% lidocaine (1:100,000 epinephrine) with 0.5% bupivacaine. The lip was retracted with two towel clamps and incised with a number-15 blade. The mucosal graft was dissected and defatted as thin as possible using Westcott scissors. The graft was sutured into the defect of the fornix using interrupted and continuous-running 6-0 polyglactin sutures. The fornix was sutured in place with 2-3 double-arm 4-0 polyglactin sutures. This was followed by the placement of the conformer and temporary tarsorrhaphy.

For the patients who underwent a dermis-fat graft but could not wear the eye prosthesis well because of a contracted socket, we added a mucous-membrane graft to deepen the fornix. The palpebral conjunctiva was injected by a 1:1 mixture of 1% lidocaine (1:100,000 epinephrine) with 0.5% bupivacaine and incised using monopolar cautery. Then we dissected and lysed the scar to create space, especially in the inferior fornix. The mucous-membrane graft was prepared and sutured with interrupted and continuous-running 6-0 polyglactin sutures. This was followed by the placement of the conformer and temporary tarsorrhaphy.

Forty-one patients underwent dermis-fat grafts; it was a primary procedure in six patients and a secondary one in 35 others. Our study comprised 23 males and 18 females, with a mean age of 40.38 (±25.64) years. The mean follow-up time was 32.2±19.0 months. The median duration between the date of visit and the date of secondary dermis-fat graft surgery was 7.1 months (range 1 day–38.2 months).

The commonest (13 cases) clinical presentation to indicate the dermis-fat graft was an exposed implant (mean width of 7.6 mm; range 5.0–10.0 mm); 10 of these cases involved infection. Discharge samples from four infected exposure-related implants were sent for culture. The results confirmed infection by coagulase-negative Staphylococcus in two cases and Pseudomonas aeruginosa in one case, and the culture for the other one resulted in no growth. Three of the 13 exposed implants underwent defect-closure intervention by means of an amniotic membrane graft (two) and tarsoconjunctival graft (one) before the secondary dermis-fat graft. The second most common condition was extrusion. Eleven patients received dermis-fat grafts due to enucleation/evisceration related to trauma (data shown in Table 1), which consisted of four blast injuries (one primary dermis-fat graft, three severe globe distortions), four severe penetrating injuries (one primary enucleation with nonporous implant, three posttraumatic endophthalmitis cases), and three unknown type of injuries. Six of the seven patients with an intraocular tumor received radiation, and in only three of those cases, the prosthesis could be successfully worn.

Enucleation with a primary dermis-fat graft was performed in six patients – one suffered a blast injury, one a chemical burn, one a severe corneal ulcer with scleral melting, one advanced glaucoma with multiple surgeries, one necrotizing scleritis, and the last one had an unknown cause. Twenty-four patients underwent enucleation and 11 others evisceration. There were various types of orbital implants employed in this study: 24 nonporous and eight porous, and three patients received no orbital implant. Before the secondary dermis-fat graft, 32 of the 35 patients involved underwent enucleation/evisceration by nonoculoplastic surgeons.

In 1978, the dermis-fat graft for anophthalmic socket reconstruction was introduced by Smith et al.18 Since then, it has been used both primarily, after enucleation, and secondarily, after the extrusion or migration of an existing implant.18–21 Smith et al have proposed that the advantage of the dermis-fat graft lies in its ability to replace the orbital volume, while, at the same time, maintaining the fornix and conjunctiva.19 Therefore, it has been accepted as a technique to reconstruct the anophthalmic socket because this procedure is more preferable in the case of implant extrusion, large exposure, as well as volume insufficiency with a shallow fornix.

Our study showed three major indications for a secondary dermis-fat graft – exposure (13/41), extrusion (11/41), and volume insufficiency with a shallow fornix (10/41) – which accounted for 82.9% of our total cases. A 4.5%–9.6% implant-exposure rate for porous orbital implants has been reported, depending on the type of material.20–22 Autogenous dermis-fat grafts implanted within the orbit survive the best, with little loss of volume, when they are placed within Tenon’s capsule immediately following the removal of the globe and when the rectus muscles (and anterior ciliary arteries) are anastomosed to the dermal edge of the graft.23 The primary dermis-fat graft in young children’s orbits appears to grow after implantation, which lends for a superior result for the primary procedure compared to the secondary one.7

We preferred to perform a dermis-fat graft for implant extrusion because the average length of time before the secondary dermis-fat graft could be performed was 7.1 months, ie, it was a long enough period of time to introduce conjunctival shrinkage because our center is the only one in Southern Thailand to offer this procedure, and we experience long queues. The causes of enucleation/evisceration also pose a risk for conjunctival damage. The enucleation/evisceration was most of the time performed by nonoculoplastic surgeons (91.4%), so the muscles and conjunctiva might not be preserved. Thirty of our subjects were able to wear the eye prosthesis. Five patients could not wear their eye prosthesis, with an inadequate fornix being the main factor. Although the dermis-fat graft can augment a volume-deficient socket and an insufficient fornix, nine of our patients underwent fornix reconstruction by a mucous membrane or a hard-palate graft. Initially, the surgeon performed the combined procedure, which was successful in 25% of cases, so the surgeon opted for a dermis-fat graft with an extended dermis to replace the superior and inferior fornix. The possible reason for the low success rate in the combined procedure may be insufficient blood supply from the base, which is a cause of mucous-membrane graft shrinkage.

The size of the dermis-fat graft harvested in our study was 30% larger than the defect measurement size because some fat has the potential for shrinkage and also because Smith et al reported a dermis-fat graft volume atrophy of more than 40% in three out of nine patients after the secondary procedure.19 On the other hand, a 5%–10% dermis-fat volume loss in the primary procedure has been reported.19,25 However, according to Sihota et al who compared the results between a 10-mm and a 20-mm thickness, the thicker the dermis-fat graft, the better the outcome.26

In conclusion, the dermis-fat graft has been used for anophthalmic socket reconstruction because it can replace the orbital volume, fornix, and conjunctiva. It is suitable as both a primary and secondary procedure, and is able to overcome the problems related to implant exposure and extrusion.