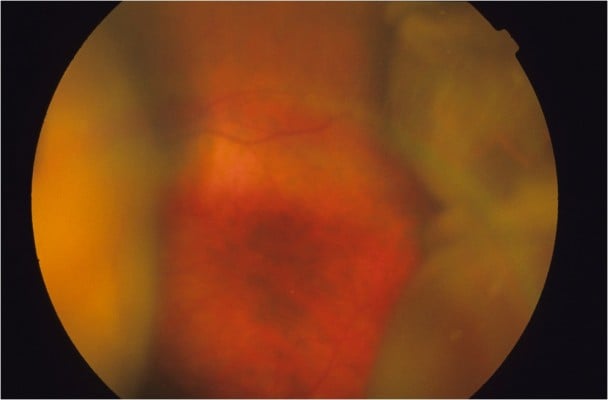 Suprachoroidal hemorrhage (Figures 1 and 2) is an uncommon but potentially vision-threatening event1 that may occur spontaneously,2–4 after trauma,5–7 or as a complication of ocular procedures including cataract surgery, secondary lens implantation, pars plana vitrectomy (PPV), scleral buckling, penetrating keratoplasty, and glaucoma surgeries.5,7–12

The pathophysiology of nontraumatic suprachoroidal hemorrhage is unknown, but it is suspected to involve the rupture of a short or long posterior ciliary artery,13,14 either directly or secondary to hypotony.15,16

This is a retrospective cross-sectional case series using the MarketScan commercial Claims and Encounters and Medicare Supplemental and Coordination of Benefit Outpatient Services and inpatient databases (Truven Health Analytics, Ann Arbor, MI, USA) from 2007 to 2011 (the most recent year the database was available to us). The MarketScan family of databases comprises the largest convenience-based proprietary database in the United States, annually encompassing approximately 40–50 million patients with employer-sponsored or supplemental insurance. These databases consist of deidentified, individual-level health records (inpatient and outpatient) obtained from large employers, hospitals, and Medicare programs. The MarketScan database contains deidentified and anonymized records and complies with the privacy requirements of the Health Information Portability and Accountability Act of 1996 (HIPPA); institutional review board approval was not required.

The MarketScan Outpatient Services databases include demographic, provider type, and insurance information along with up to four diagnosis codes and one procedure code per recorded insurance claim (coded using the International Classification of Diseases, Ninth Revision [ICD-9]; and Current Procedural Terminology [CPT], respectively). Further details regarding the structure and HIPPA compliance of the MarketScan databases can be found elsewhere.24 We have previously used these databases to study the incidence of endophthalmitis after trabeculectomy.25

To capture the surgical treatments recorded for the queried cases of postoperative suprachoroidal hemorrhage, cases of PPV (CPT codes 67036, 67038, 67039, 67040, 67041, 67042, 67043) and choroidal drainage (recorded under CPT code 67015, “Aspiration or release of vitreous, subretinal or choroidal fluid, pars plana approach [posterior sclerotomy]”) accompanied with one of the suprachoroidal hemorrhage or effusion ICD-9 codes were identified. We also queried CPT code 67105 (“repair of retinal detachment, one or more sessions; photocoagulation, with or without drainage of subretinal fluid”) because the codes 67015 and 67105 may be easy to confuse.

We used descriptive statistics and cross-tabulations to evaluate prevalence estimates of comorbidities and demographic information. Kaplan–Meier survival analysis was used to calculate 3-month cumulative incidence of suprachoroidal hemorrhage after glaucoma filtering surgeries. Regression analysis was used to calculate the odds ratio, confidence intervals, and P-value. A P-value of <0.05 was considered to be statistically significant. All statistical analyses were performed with SPSS (version 22; SPSS Inc., Chicago, IL, USA).

In the databases, there were a total of 27,440 glaucoma filtration procedures, including 17,843 trabeculectomies and 9,597 tube shunt surgeries, among 21,523 patients who had 3 months of continuous health insurance after their procedure date. The age of patients with glaucoma filtration records ranged from infancy (<1 year old) to 99 years old, with a mean age of 66.4±12.8 years. There were 13,529 males (49.3%) and 13,911 females (50.7%). There were 107 cases of “definite” postoperative suprachoroidal hemorrhage within 3 months of trabeculectomy and 113 cases within 3 months of tube shunt (total of 220 cases). Including only the “definite” cases of postoperative suprachoroidal hemorrhage, Kaplan–Meier analysis showed the 3-month cumulative incidence rate of suprachoroidal hemorrhage to be 0.6%±0.06% after trabeculectomy and 1.2%±0.11% after tube shunt, and there was an overall rate of 0.8%±0.05% after both types of surgeries (Table 1).

Using only the “definite” cases of postoperative suprachoroidal hemorrhage, this complication was twice as likely to occur after tube shunt as after trabeculectomy (odds ratio, 1.98; 95% confidence interval, 1.51–2.58; P<0.001). The inclusion of “suspected” cases of suprachoroidal hemorrhage yielded very similar increased odds after tube shunt surgery (OR, 1.95; 95% confidence interval, 1.63–2.32; P<0.001).

The present study analyzed only trabeculectomies and tube shunt surgeries and did not include nonpenetrating glaucoma surgeries, including deep sclerectomies, viscocanalostomies, and canaloplasties. A recent systematic review and meta-analysis reported that nonpenetrating glaucoma surgeries were less effective in lowering IOP but also had lower risks for choroidal effusion and other complications, although suprachoroidal hemorrhage was not specifically reported.28

The current study used a nationally pooled database containing data from all 50 states, yielding large numbers of glaucoma surgeries. This nationwide database also allowed us to avoid the potential biases associated with single-centered and surgeon-specific data. As for limitations, as the MarketScan databases are insurance claim-based and the medical diagnoses and surgical procedures are recorded as ICD-9 and CPT codes, respectively, the accuracy of the data depends on proper coding. For this reason, we also included the cases of choroidal effusions as “suspected” cases of suprachoroidal hemorrhage and presented the incidence rates as a range encompassing both “definite” cases of postoperative suprachoroidal hemorrhage and “definite” plus “suspected” cases.

In addition, the MarketScan databases provide only ICD-9 diagnostic and CPT procedural codes and do not provide detailed clinical information about individual patients, such as individual IOP measurements, the severity of the suprachoroidal hemorrhages, surgical details, and visual outcomes. Therefore, we could not provide this information in the present study.

In conclusion, the 3-month cumulative incidence rate of postoperative suprachoroidal hemorrhage was 0.6%–1.4% after trabeculectomy and 1.2%–2.7% after tube shunt procedures. This condition was two times more likely to occur after tube shunt surgery than after trabeculectomy. The majority of suprachoroidal hemorrhage cases did not have any recorded surgical managements, which might imply most were treated without additional surgery. Of course, these incidence rates were calculated from a set of insurance databases and may not be generally applicable to all clinical situations. Future prospective studies are required to reevaluate the prevalence of different treatment modalities in the management of postoperative suprachoroidal hemorrhage.

The authors from the University of Miami are partially supported by the National Institutes of Health Center Core Grant P30EY014801 and an unrestricted grant from Research to Prevent Blindness, New York City. SGS has received consulting fees from Alimera and Bausch + Lomb, speakers’ fees from ThromboGenics, and writers’ fees from Vindico. The other authors report no conflicts of interest in this work.