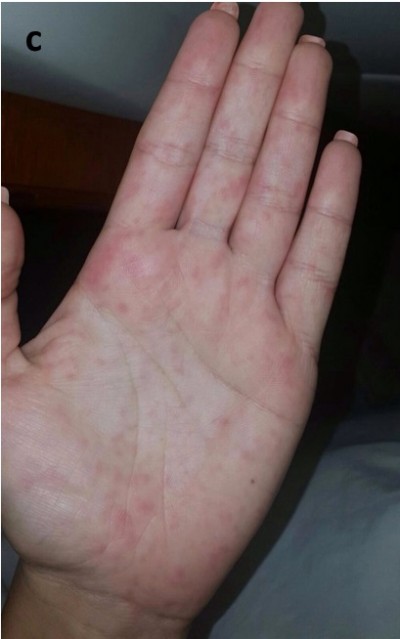 Abstract: In recent years, several European countries reported cases of imported chikungunya infection. We present the first imported clinically manifested chikungunya fever in Croatia. A 27-year-old woman returned to Croatia on 21 March 2016, after she stayed in Costa Rica for two months where she had noticed a mosquito bite on her left forearm. Five days after the mosquito bite she developed severe arthralgias, fever and erythematous papular rash. In next few days symptoms gradually subsided. After ten days she felt better, but arthralgias re-appeared accompanied with morning stiffness. Two weeks after the onset of the disease she visited the infectious diseases outpatient department. The physical examination revealed rash on the trunk, extremities, palms and soles. Laboratory findings showed slightly elevated liver transaminases. Serological tests performed on day 20 after disease onset showed a high titer of chikungunya virus (CHIKV) IgM and IgG antibodies which indicated CHIKV infection. CHIKV-RNA was not detected. Serology to dengue and Zika virus was negative. The patient was treated with nonsteroid anti-inflammatory drugs and paracetamol. Her symptoms ameliorated, however, three months later she still complaint of arthralgias. The presented case highlights the need for inclusion of CHIKV in the differential diagnosis of arthralgia in all travelers returning from countries with documented CHIKV transmission.

Chikungunya fever is a mosquito-borne emerging viral disease caused by chikungunya virus (CHIKV), which belongs to the genus Alphavirus of the family Togaviridae. It is endemic in many parts of Africa and Asia where seroprevalence rates reach 75%.1 In Africa, the virus maintains a sylvatic cycle between nonhuman primates and forest-dwelling mosquitoes, while in Asia transmission of CHIKV occurs in an urban cycle involving humans and Aedes spp. mosquitoes (Ae. aegypti, Ae. albopictus).2 Typical clinical symptoms of chikungunya include fever, headache, myalgia, rash, and arthralgia. The symptoms, particularly joint pain, can be severe and long lasting in many patients.3

In many European countries, imported cases of chikungunya were repeatedly reported.4–7 First, autochthonous CHIKV cases were reported during the 2007 outbreak and involved more than 200 cases in the Ravenna Province, Italy.8,9 In 2014, an outbreak including 12 CHIKV cases occurred in Montpelier, France.10 In Croatia, CHIKV antibodies were sporadically detected in travelers from endemic areas. A seroepidemiological study conducted during 2011–2012 showed that 0.9% inhabitants of the Croatian littoral are seropositive to CHIKV.11 We report the first detection of an imported, clinically manifested case of chikungunya fever in Croatia.

On March 26, 2016, a 27-year-old woman visited the infectious diseases outpatient department because of persistent arthralgias and rash. She works as a stewardess on a cruise ship and she stayed in Costa Rica for 2 months where she developed symptoms; then she returned to Croatia on March 21. Six months before this illness, she was vaccinated against yellow fever. She remembered a mosquito bite on her left forearm because she noticed a little hematoma around the indurated papule which she had not experienced after earlier mosquito bites. Five days after the mosquito bite, on the first day of her disease, she felt symmetrical arthralgias in her ankles, knees, wrists, and elbows but also in small joints of her hands and feet. The third day, she developed high fever up to 38.5°C with chills. Her arthralgias deteriorated, so she could hardly walk. On the fifth day of her illness, an itchy rash appeared on her trunk, and the next day it extended to her face, extremities, as well as palms and soles. The erythematous papular rash subsided in the next 2 days. At the same time, she became afebrile, while arthralgias remained up to the tenth day of her illness after which she was feeling well, but exhausted. During the acute phase of her illness, she had nausea and she had a few loose stools too. Ten days after she had recovered, severe arthralgias in her ankles, elbows, right shoulder, and in the small joints of hands and feet reappeared. She also complained about morning stiffness lasting for 10–30 min.

According to the case definition proposed by the international chikungunya expert group (2015), which distinguishes 4 chikungunya case categories; acute clinical case, atypical case, severe acute case, and suspected and/or confirmed chronic case;12 our patient was classified as a confirmed chronic chikungunya case. The patient was treated with nonsteroidal anti-inflammatory drugs and paracetamol. She was regularly followed up during the next few months in order to treat her arthralgias and also to observe the progress of her illness. Her symptoms ameliorated, but 3 months later she still reports arthralgias.

In addition, the sample was tested for the presence of CHIKV RNA using a qualitative real-time reverse transcriptase-polymerase chain reaction (RT-PCR) according to the protocol described by Smith et al.13 For nucleic acid isolation, an automated system QIAxtractor (QIAGEN, Hilden, Germany) was used. Real-time RT-PCR was performed using a single-tube RT-PCR test kit (Invitrogen SuperScript™III Platinum® One-Step Qualitative Kit; Carlsbad, CA, USA). The amplification and detection were performed with 7500 Real Time PCR System (Applied Biosystems, Foster City, CA, USA). The test tube contained a 25-µL reaction mixture which included 5 µL of isolated RNA, 0.2 µM forward primer (CCGAAAGGAAACTTCAAAGCAACT), 0.2 µM reverse primer (CAGATGCCCGCCATTATTGAT), and 0.1 µM probe (FAM-GGGAGGTGGAGCATG-MGB). The reaction mixture was exposed to a 30 min 50°C reverse transcription step, 2 min of Taq activation at 95°C, and 50 cycles consisting of 95°C for 15 sec and 55°C for 32 sec. No CHIKV RNA was found in the tested sample. Sensitivity of the RT-PCR is reported to be high (0.3 plaque-forming units; PFU/mL), as is specificity (no cross reactivity with the most common alphaviruses that contained a minimum of 3 log10 PFU of heterologous viral RNA).13

After a bite from an infected mosquito, CHIKV rapidly spreads in the body eventually causing acute illness. It is known that up to 18% of infected patients, usually those younger than 25 years, are asymptomatic.14 After the resolution of the acute illness symptoms, myalgias and arthralgias may persist for weeks, months, and even years. The proportion of patients suffering from the chronic form of disease that can be attributed to CHIKV infection varies between studies. In Singapore, 13% of patients had arthralgias 3 months after the acute phase, while 49% of patients from India had arthralgia 10 months after disease onset. After the outbreak of chikungunya in Italy, 70% of patients reported persistent arthralgias after six months and after 12 months, and chronic symptoms were present in 32% of patients.15 Severe arthralgia with morning stiffness was the most prominent symptom in our patient, too. Three months after disease onset, she still reported arthralgia.

Lymphopenia and thrombocytopenia are the most commonly detected pathologic laboratory findings associated with CHIKV infection. In the Reunion Island outbreak, lymphopenia was observed in 79% and moderate thrombocytopenia in 40%–50% of chikungunya patients.16 In our case, the only abnormal laboratory findings were slightly elevated liver enzymes, a finding that has been less commonly reported during chikungunya fever. Lymphocyte count was normal, but at the lower limit of the normal range. Similarly, leukopenia and thrombocytopenia were uncommon in imported CHIKV cases in Italy during 2006.17

Knowledge about the time period between the infection and the onset of symptoms is crucial as it can improve measures to prevent spreading of vector-borne infections. The incubation period in our patient was exactly 5 days, as she recalls the day when she had the mosquito bite. CHIKV viremia is usually short-lived (5 to 6 days), and so RT-PCR is most sensitive when performed within a week after disease onset. However, a study from Indonesia showed that duration of viremia during chikungunya was extended as early as 6 days prior until 13 days post-onset of fever.18 This observation suggests the possibility that our patient was viremic when she returned to Croatia and that she could have been a CHIKV reservoir, representing the possible threat for transmission and spreading of CHIKV, since one of the main vector, Ae. albopictus, is established in this area.11 RT-PCR was performed to confirm the presence of viremia; however, CHIKV RNA was not detected. Since the sample was collected in the post-acute phase and both CHIKV IgM and IgG antibodies were documented, the probability to detect viral RNA was low.

Serology is the most commonly used method for diagnosis of arboviral infections. Due to similar clinical symptoms and possible coinfections,19 CHIKV, DENV, and ZIKV were included in differential diagnosis in our patient. High titer of CHIKV IgM and IgG antibodies as well as negative DENV and ZIKV serology indicated CHIKV infection.

In recent years, the risk of CHIKV emergence in Europe is increasing, as imported cases of chikungunya are continuously reported. Any country where Aedes mosquito is present represents a potential area for future chikungunya outbreaks. Climate changes modeling and Ae. albopictus distribution maps showed that hot spots for establishment of this mosquito species in Europe are southern France, the northern and northeastern coasts of Spain, Portugal, Italy, the eastern coasts of the Adriatic, and western Turkey. During the last 2 decades, mosquito climate suitability has significantly increased over the southern UK, northern France, the Benelux, parts of Germany, Italy, Sicily, Slovenia, Croatia, and Bosnia and Herzegovina.20 It has been observed that the elimination of invasive mosquito species such as Ae. albopictus is extremely difficult, if possible at all. Considering the intensive airline travel between Europe and other parts of the world, it is almost just a question of when chikungunya will emerge as an autochthonous disease in Europe. In Croatia, this situation already happened with dengue in 2010;21 therefore, there is a great possibility that the same scenario will happen with CHIKV, since a competent vector Ae. albopictus is present in Croatia. Control measures should be regularly performed, particularly in areas with established Ae. albopictus population.

Detection of imported chikungunya fever in Croatia highlights the need for clinicians to consider chikungunya in the differential diagnosis of arthralgia in all persons returning from areas where CHIKV transmission is documented.

Written and signed informed consent for publication of this case report as well as the accompanying images was obtained from the patient.