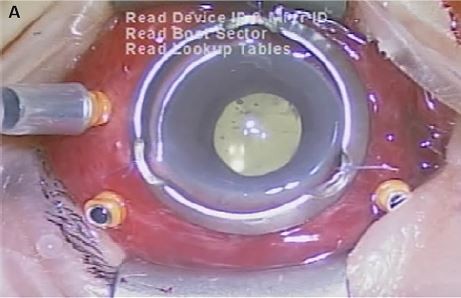 Background: Postoperative endophthalmitis is a dreaded postsurgery complication which may lead to legal blindness. In addition to typical risk factors, some minor episodes may also lead to the occurrence of endophthalmitis. The purpose of the current study was to report a case of acute postoperative endophthalmitis caused by Staphylococcus hyicus in a patient with a contact history of felines.
Case presentation: A 58-year-old Taiwanese female who had a history of contact with felines due to her occupation had received clear lens extraction surgery of the left eye on July 10, 2015. One day after the surgery, the best-corrected visual acuity (BCVA) of the left eye was 20/40, which rapidly deteriorated to light perception with hypopyon formation. She was admitted for acute postoperative endophthalmitis and received antibiotic therapy with topical levofloxacin instillation and intravitreal vancomycin plus amikacin injection. Trans pars plana vitrectomy (TPPV) was then performed 1 day after admission. The specimen obtained from the vitreous and anterior chambers yielded the growth of S. hyicus. The patient was discharged with BCVA measured by counting fingers. Another TPPV was arranged for the persistent vitreous opacity on October 20, 2015, and the BCVA recovered to 20/32 at the last visit.
Conclusion: To our knowledge, this is the first case of acute postoperative endophthalmitis caused by S. hyicus due to feline contact. Unusual pathogens in the environment and personal hygiene status should be validated preoperatively to prevent the development of postoperative endophthalmitis.

The purpose of the current study was to report a case of acute postoperative endophthalmitis caused by Staphylococcus hyicus in a patient with a contact history of felines. Similar studies are also discussed.

A 58-year-old Taiwanese female with diabetes mellitus and occupation-related contact history of feline came to our outpatient department to seek medical help for progressively decreased vision in the past year. On examination, the distant BCVA was 20/20 in the left eye but the best-corrected near visual acuity showed a poor value of J10 (equal to 20/65 at near vision); presbyopia was then diagnosed. Prophylactic antibiotic with topical moxifloxacin four times per day was prescribed before the clear lens extraction procedure, and the patient received phacoemulsification with intraocular lens (IOL) implantation on July 10, 2015, without intraoperative complication. One day after surgery, she complained about blurred vision and ocular pain in her left eye under the use of topical levofloxacin four times per day as a postoperative prophylactic agent. An ocular examination revealed a BCVA of 20/40 in the left eye, conjunctival injection, corneal edema, multiple anterior chamber cells 4+ by Standardization of Uveitis Nomenclature (SUN) grading score11 and a full-patency nasolacrimal duct. With suspected acute postoperative endophthalmitis, emergency admission was suggested and she was admitted to our hospital on July 12, 2015. On the day of admission, a further decreased BCVA to light perception, hypopyon formation and vitreous opacity were observed.

After the subject was hospitalized, a needle tap was performed and fluid from the vitreous and anterior chambers was obtained and sent for culture. We continued administering topical levofloxacin accompanied with intravitreal vancomycin (1 mg/0.1 mL) and amikacin (0.4 mg/0.1 mL) injection every 2 days without systemic antibiotic therapy, but hypopyon remained and vitreous opacity was found by B-scan ultrasonography (Figure 1). For the deteriorating lesion, trans pars plana vitrectomy (TPPV) and anterior chamber irrigation were performed on July 13, 2015. In all, 23-gage trocars were inserted at the pars plana region after aseptic procedures. Diffuse vitreous haze without vitreous hemorrhage or retinal break was found during TPPV (Figure 2), and the vitreous cavity was cleared by vitrectomy and examined by indirect ophthalmoscope to ensure media clarity. In addition, dexamethasone was injected into the vitreous to retard the inflammation. The specimen collected from the vitreous and anterior chambers yielded the growth of circular whitish-yellow colonies with smooth edges, which turned out to be S. hyicus. The microorganism susceptibility test revealed responses to amikacin, vancomycin, ceftazidime, cefepime, levofloxacin, moxifloxacin, piperacillin plus tazobactam, teicoplanin and daptomycin and resistance to penicillin, cefazolin, gentamicin, cefuroxime, ceftriaxone and ofloxacin was observed. The hypopyon improved under combined antibiotic treatment with amikacin and vancomycin. The patient was discharged on October 8, 2015 with BCVA by counting fingers at 30 cm, and blood sugar level did not exceed 200 mg/dL throughout the admission. In the follow-up visit, the BCVA of the left eye remained around 20/200, with anterior chamber cell of 1–2+ and remnant vitreous opacity. No intravitreal injection of antibiotics was arranged after the discharge. Then, the patient failed to visit our clinic for a short period and was back to our clinic on October 16, 2015 for the mild blurred vision; vitreous haze was observed via indirect ophthalmoscope. As a result, another TPPV without intravitreal injection was performed on October 20, 2015. During the surgery, only mild vitreous haze was found, similar to the condition at the previous visit, and vitrectomy was performed to clear the vitreous again. The vitreous opacity had vanished postoperatively, and the patient was discharged on October 29, 2015 (Figure 3). Skin specimens from one of the feline the patient bred grew the same pathogen of S. hyicus. The anterior chamber cell had diminished to a score of zero, and the BCVA recovered to 20/32 at the last visit on January 20, 2017 (Figure 4).

All the procedures and managements performed in the current case report involving the human patient adhere to the Declaration of Helsinki of 1964. A written informed consent was obtained from the patient for the publication of this case report and any accompanying images.

Staphylococcus hyicus is gram-positive, coagulase-positive coccus that has been discovered mostly in a porcine disease known as greasy pig disease.14,15 In addition, this microorganism has been found on the skin of bovine and felines14,15 and might incidentally lead to bacteremia in human beings.16 To our knowledge, this is the first case of postoperative endophthalmitis induced by S. hyicus with a contact history of felines. The subject is a barber for mainly felines and canines and has several felines and canines in her house. The major limitation of this viewpoint is that an unknowingly contact history of our patient with porcine or bovine might exist. However, our patient had no history of working in a farm or pasture; thus, the most possible route for the infection is via her occupation. The medical treatment involved intravitreal vancomycin and amikacin for S. hyicus initially, and both were shown to be effective in treating Staphylococcus species elsewhere.17,18 The microbial susceptibilities of the two antibiotics were confirmed later, so no alteration of the treatment was made.

To decrease the chance of postoperative infection in our patient, povidone-iodine was preoperatively applied on the conjunctival sac after fine eye wash was done. A 3-day course of preoperative topical moxifloxacin was then prescribed to reduce the chance of postoperative endophthalmitis caused by environmental microorganisms.19 We did not perform prophylactic intracameral injection of cefuroxime since the ESCRS trial did not compare the efficiency between cefuroxime and other antibiotics6 and because the practices of intracameral cefuroxime still differ among European countries.6 Furthermore, the rate of postoperative endophthalmitis in our institution reached a fair value of ~0.06% with the use of perioperative topical fluoroquinolones (unpublished data, Lin 2017), which is similar to the value obtained with the implementation of cefuroxime.6 However, the intervals where our patient comes into contact with animals are beyond our ability to control and may lead to postsurgical infection despite the prevention plan. Avoidance of animal contact before and after surgery should be strongly recommended to patients with histories of animal interaction, and routine conjunctival swabs should be arranged to recognize unusual pathogens in this population.

Regarding surgical management, TPPV was arranged twice to eradicate the vitreous opacity induced by endophthalmitis and make a better distribution for medications. The first TPPV procedure was arranged just 2 days after the onset of the symptoms, which negated the infectious focus in vitreous. The second TPPV procedure, which was arranged 3 months later due to the lack of follow-up with our patient for ~40 days, successfully eradicated remnant vitreous opacities, which probably resulted from the mild inflammatory reaction after the first TPPV. This confirmed the importance of surgical intervention in postoperative endophthalmitis, as it is even more efficient than intravitreal antibiotics.18,20

In conclusion, acute postoperative endophthalmitis caused by S. hyicus is rare but may still develop, which implies that even unusual pathogens in the environment should be validated preoperatively together with personal hygiene status. A suitable prophylactic strategy and fast treatment according to the clinical appearance are always warranted.