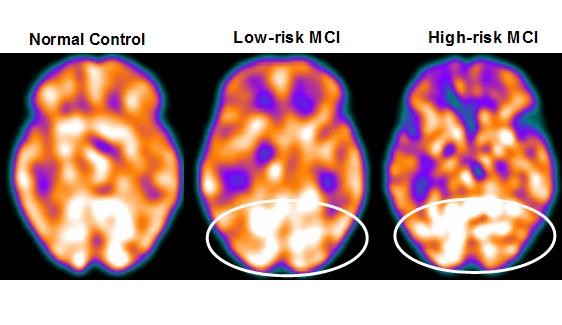 
Background: An increased electroencephalographic (EEG) upper/lower alpha power ratio has been associated with less regional blood perfusion, atrophy of the temporoparietal region of the brain, and reduction of hippocampal volume in subjects affected by mild cognitive impairment due to Alzheimer’s disease as compared with subjects who do not develop the disease. Moreover, EEG theta frequency activity is quite different in these groups. This study investigated the correlation between biomarkers and memory performance.
Methods: EEG α3/α2 power ratio and cortical thickness were computed in 74 adult subjects with prodromal Alzheimer’s disease. Twenty of these subjects also underwent assessment of blood perfusion by single-photon emission computed tomography (SPECT). Pearson’s r was used to assess the correlation between cortical thinning, brain perfusion, and memory impairment.
Results: In the higher α3/α2 frequency power ratio group, greater cortical atrophy and lower regional perfusion in the temporoparietal cortex was correlated with an increase in EEG theta frequency. Memory impairment was more pronounced in the magnetic resonance imaging group and SPECT groups.
Conclusion: A high EEG upper/low alpha power ratio was associated with cortical thinning and less perfusion in the temporoparietal area. Moreover, atrophy and less regional perfusion were significantly correlated with memory impairment in subjects with prodromal Alzheimer’s disease. The EEG upper/lower alpha frequency power ratio could be useful for identifying individuals at risk for progression to Alzheimer’s dementia and may be of value in the clinical context.