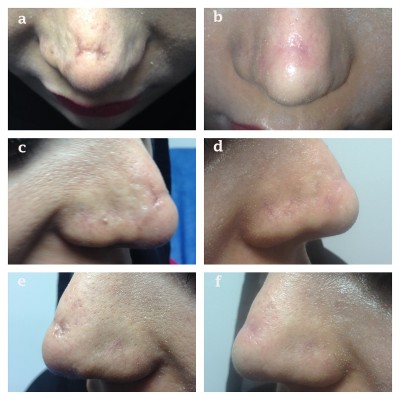 Background: Fractional CO2 laser is one of the most effective treatment options used to resurface scars.
Objective: To evaluate the efficacy and safety of early treatment of postsurgical scar by fractional ablative CO2 laser.
Methods: A total of 27 Egyptian patients with recent postoperative scars were enrolled in this study. Three sessions of fractional CO2 laser with a 1-month interval were started 4 weeks after surgery. Vancouver Scar Scale (VSS) was used as an assessment tool at 1 and 3 months after the final treatment. Patients reported their satisfaction using a subjective 4-point scale.
Results: Results demonstrated a statistically significant overall average improvement of the VSS (5.33±1.33) before compared with (2.55±1.06) 3 months after the last laser treatment (P≤0.001). Among the individual parameters in the VSS, the most significant improvements were found in pigmentation, height, and pliability. Patient’s subjective satisfaction scores showed a significant greater degree of satisfaction after laser treatment.
Conclusion: Fractional ablative CO2 laser is an effective and safe treatment modality for surgical scars in the early postsurgical period.

Wound healing is a complicated process, consisting of overlapping phases. These phases are hemostasis, inflammation, granulation, and remodeling.1 Any alteration in the process would lead to a variety of sequelae, including chronic wound healing and scars.2 Scars arise from either excessive or insufficient new collagen generation during the wound healing process and may appear as hypertrophic scars and atrophic scars.3

Scars affect ~4.5%–16% of the general population and, depending on the degree of disfigurement, can have a profound impact on the psyche of the patient such as low self-esteem and feelings of psychosocial isolation.4

Fractional photothermolysis is a laser technology that creates thousands of microscopic columns of thermal damage (referred to as microthermal zones [MTZs]) in the epidermis and dermis surrounded by islands of normal tissue, hence results in shorter recovery time and fewer adverse effects than traditional ablative laser resurfacing.6

In recent years, early intervention with laser devices has been suggested as a novel modality to improve scar quality. Some lasers are effective not only as a treatment for scars but also in the prevention of hypertrophic scars.7 Several studies have evaluated the efficacy of nonablative fractional erbium glass, pulsed dye laser (PDL), and potassium titanyl phosphate to improve early postoperative and post-traumatic scars and a few other studies have been evaluated on the efficacy of fractional laser treatment of postoperative scars during the early post-traumatic period.8–11

Therefore, in this study, we aimed to evaluate the efficacy and safety of early treatment of postsurgical scar by fractional ablative carbon dioxide.

A total of 27 Egyptian participants (15 females, 12 males; Fitzpatrick skin types III–V) aged 15–47 years, who had recent postsurgical scars (4–6 weeks after operation), were included in the study. Candidates with active infections, history of keloid, recent isotretinoin intake, smoking, and pregnancy were excluded. The study was initially approved by the ethical committee of Al-Azhar University. Written informed consent was obtained from all participants before enrollment. Parent or legal guardian of any patient under the age of 18 years signed the informed consent.

For early intervention of the postoperative scar, three sessions of fractional CO2 10,600 nm laser (Smartxide square, Deka, Florence, Italy) with 1-month interval were started after 4–6 weeks of surgery. The treatment areas were cleansed by using a mild cleanser. A topical anesthetic cream (eutectic mixture of 2.5% lidocaine hydrochloride and 2.5% prilocaine; eutectic mixture of local anesthetics; AstraZeneca AB, Sodertalje, Sweden) was applied. After an hour of application, the anesthetic cream was gently removed to obtain a completely dry skin surface. Scarring sites were treated with fractional CO2 using a power of 10–15 W according to the skin type, dwell time of 500 µs, stack 2, and 700 µm spacing. The application of a sunscreen was continued. Topical antibiotic cream was applied twice per day for 3 days following the session. Patients were instructed to use a full-spectrum sunscreen regularly.

Vancouver Scar Scale (VSS) was used by two blinded dermatologists to assess the scars at baseline and 3 months after the final treatment. The VSS includes assessment of pigmentation, height, pliability, and vascularity of the scar. Each of the four parameters was assigned numbers according to the previously mentioned characteristics. Scores from all parameters were added together to attain a final VSS score. Patients reported their satisfaction with the treatment outcomes using a subjective 4-point scale. Patients were also questioned about the side effects of the treatment, especially bleeding, oozing, post-treatment dyschromia, crusting, and erythema at each session.

SPSS software version 18 was used. In comparison to the different sessions for each participant, we estimated a P-value at most <0.05; consequently, we confirmed the significant difference of statistical analysis in this clinical trial.

The results demonstrated a statistically significant overall average improvement of the VSS (5.33±1.33) before compared with (2.55±1.06) 3 months after the last laser treatment (P≤0.001) (Figure 1). Among the individual parameters in the VSS, the most significant improvements were found in pigmentation, height, and pliability (Figures 2 and 3).

Conventional laser resurfacing and mechanical dermabrasion can potentially destabilize a healing tissue bed or disrupt the protective epidermal barrier prior to the incision seal. Nonablative, pulsed, or fractionated lasers place minimal mechanical stress on the tissues making an option for earlier treatments.12

Early laser intervention for treatment of scars has always yielded better results. The optimal time for laser treatment was during the premature phase of scar formation at a few weeks postsurgery.12,13

This current study aimed to evaluate the possibility of early intervention of fractional CO2 laser for improving the appearance of postsurgical scars. Assessment of the erythema, height, pliability, and pigmentation was done using the VSS, which was originally designed to assess subjective parameters in an objective way. Regarding total VSS, there was a significant improvement in VSS for postsurgical scars, 3 months after last session by fractional CO2 laser. The improvement was significant in all parameters of VSS score, with higher significance in terms of height, pigmentation, and pliability, while less significant in terms of vascularity. In the current study, there is a significant improvement regarding patients’ satisfaction grades.

The effect of PDL and fractional Er:YAG laser for scars was demonstrated, especially in term of pliability, as a combined approach on post-thyroidectomy scar on the day of suture removal.16 Another study has compared the effect of PDL and fractional CO2 laser and revealed that both PDL and AFL produced statistically significant improvements. However, comparatively, there was no statistical difference between them. In each variable, AFL was more effective than PDL in the improvement of pliability and thickness. In contrast, PDL was superior to AFL in the improvement of vascularity and pigmentation.17

Fractional photothermolysis, first introduced by Manstein et al in 2004,18 is the latest in the available phototherapeutics for scars. Fractionation refers to a technology in which thousands of laser MTZs are directed at the skin surface while sparing islands of healthy skin around it, so bulk heating and confluent epidermal damage is avoided, thereby reducing the risk of irreversible nonspecific thermal injury to the dermis, which may worsen scarring. Mechanism of action is through initial induction of proinflammatory cytokines and growth factors followed by dermal collagen remodeling.19 In another study, AFL showed better results in the overall appearance and the visibility of the incision line of fresh surgical scars than NAFL.20

In another study on 16 postoperative scars of 15 patients, a greater decrease in VSS score was noted in half of the treated scars after two sessions of fractional CO2 laser, especially in terms of texture and thickness. Patients also expressed a significantly greater degree of satisfaction with the treated side as assessed using a subjective 4-point scale.21

Although the mechanism of fractional photothermolysis in the treatment of atrophic and hypertrophic scar is not known exactly, the columns of thermal injury characterized by localized epidermal necrosis and collagen denaturation may initiate a cascade of events that eventually results in a normalization of the collagenesis–collagenolysis cycle.22 Regarding the early fractional CO2 laser intervention, it can, in theory, normalize collagen and realigns abnormal collagen fiber by thermal effect of laser treatment.

There were some limitations in our study, such as being single center in nature, and with variability in initial morphology and, anatomical sites of the scars. Controlled side-to-side comparative studies with larger sample size and longer follow-up period are required. In addition primary outcome measure, although validated, is largely subjective.

Fractional ablative CO2 laser is an effective and safe treatment modality for surgical scars in the early postsurgical period. Overall improvement was statistically significant in the VSS.