Back to Journals » Eye and Brain » Volume 10

Curvilinear, symmetrical, and profound pigment deposition on the posterior lens capsule in a patient with bilateral pigmentary dispersion syndrome 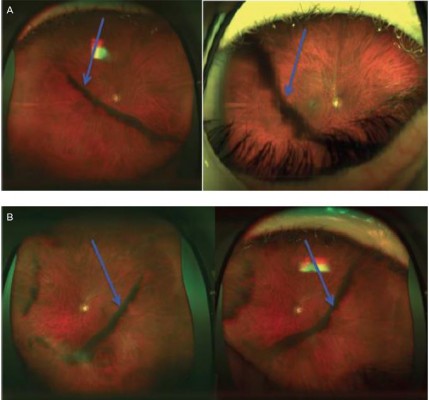 Pigmentary dispersion syndrome (PDS) has many distinct clinical features that aide in its diagnosis and management. Ritch et al1 estimated the prevalence of PDS to be 2.45% of Caucasian patients in a glaucoma screening. Roberts et al2 estimated the prevalence of PDS to be 0.0015% of African Americans in a primary care setting. These estimates are likely disparate because of the difference in phenotypic expression between the two ethnicities, as noted by Roberts et al.2 Although PDS is autosomal dominant in nature3 for both African American and Caucasian populations, it is thought to have incomplete penetrance in the African American population.4 Myopia has been noted as a significant corollary to PDS. Scheie and Cameron5 reported the incidence of myopia to be 65% in a group of 493 eyes with PDS, regardless of ethnicity. The classic clinical presentation of PDS includes midperipheral iris transillumination defects, Krukenberg’s spindle, and dense homogeneous trabecular pigmentation.6 Other clinical features that are often overlooked may include pigment on the lens zonules7 and pigment on the anterior and posterior lens capsule.8 It is estimated that patients with PDS have a 35%–50% chance of developing pigmentary glaucoma during their lifetime.9 Below is a case in which the patient presented with many of the known features of PDS, along with an uncommon presentation of symmetrical pigment on both posterior lens capsules with changes in morphology and density over time.

A 45-year-old Caucasian male initially presented with reduced acuities in both eyes since childhood. His medical and family history was unremarkable, with best-corrected acuities 20/60 in each eye and correction –8.00–2.00×135 OD and –8.00–1.25×020 OS. External examination was normal, but slit lamp examination revealed midperipheral iris transillumination defects (Figure 1), pigment on the corneal endothelium and dense, and symmetrical pigment on the posterior lens capsules. Gonioscopy revealed angles open to ciliary body with grade 2+ pigment in all quadrants and no evidence of angle recession. Intraocular pressures (IOPs) were 17 and 18 mmHg in each eye. Dilated fundus examination with binocular indirect ophthalmoscopy and scleral depression revealed an intact retina, with no holes or tears and no signs of pigmented cells in the vitreous. The optic nerves were small: ~1 mm ×1 mm as measured with Spectral Domain Optical Coherence Tomography (SD-OCT; © 2017; Carl Zeiss Meditec AG, Jena, Germany). We confirmed optic disc hypoplasia in both eyes as the likely cause of the patient’s decreased vision. Over the course of 3 years, the IOP remained in the 15–19 mmHg range in both eyes. During this time, retinal nerve fiber layer thinning and corresponding visual field defects were evident. Given the presence of optic nerve hypoplasia in addition to PDS, it was difficult to assess the damage solely related to glaucomatous changes. For this reason, glaucoma therapy was initiated using Travatan Z ophthalmic solution once daily in both eyes. IOPs remained stable at 13 mmHg in each eye, and he continues to be monitored for any changes. Of particular interest was the unusual presentation of pigment deposition on the posterior lens capsules of each eye. The pattern of pigment was dense, oblique, and curvilinear and located along the posterior lens capsules (Figure 2). The pigment on the posterior capsule created shadows on the retina, which were best documented with Optos Daytona ultra-widefield imaging (© 2017; Optos plc, Dunfermline, UK), which provides ultra-widefield fundus imaging (Figure 3). Over time, it appeared that there was an increase in pigment deposition along the posterior lens capsule. Comparing photos 1 year apart, one can observe the apparent increase in the size of pigment deposition (Figure 4A and B). Interestingly, photos taken 2 years later showed a marked decrease in pigment deposition on the posterior lens capsules (Figure 5). There were no changes in the patient’s medical history in that same time span, including a repeated denial of medication changes or incidents of trauma. A search of literature published in the last 15 years did not reveal any cases of bilateral, dense, and symmetrical pigment deposition on the posterior lens capsule with a change in morphology over time.

The patient described in this case has given written informed consent to have the case details and accompanying images published.

The unusual presentation of the density, symmetry, and changing morphology of pigment has not been described previously in literature. This has clinical significance because if the known and sometimes subtle findings of PDS such as Krukenberg’s spindle, iris transillumination defects, and pigmented trabecular meshwork are initially overlooked by the examiner, observation of pigment on the posterior lens capsule may promote the examiner to check for these features more closely. Additionally, future studies relating the degree of iris bowing to a break in the ligament of Weiger may confirm such a relationship and thereby identify a new subset of patients with this feature of PDS.