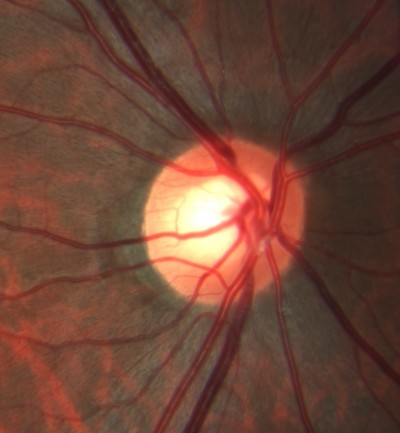 Abstract: An otherwise healthy 24-year-old man presented with a painless decrease of vision in the left eye for 2 days. Best-corrected visual acuity was 20/20 in the right eye and 20/80 in the left eye. Anterior exam was unremarkable and funduscopic exam in the left eye revealed retinal hemorrhages in all four quadrants with venous dilation and tortuosity consistent with central retinal vein occlusion. Fluorescein angiography revealed delayed venous filling with neither leakage nor vasculitis. A comprehensive work-up that included infectious, inflammatory, and hypercoagulability studies was unremarkable, and magnetic resonance imaging of the orbits was unrevealing. After 2 months, best-corrected visual acuity returned to 20/20-2 in the left eye. Upon closer review of the vascular anatomy in the left eye, a bifurcation of the central retinal artery at the level of the optic disc was tightly intertwined with an undilated nasal retinal vein in a manner that appeared to compress the underlying central retinal vein, resulting in dilation and tortuosity of the remaining venous branches. The vessel wall damage, turbulent venous flow, and compressive mass effect resulting from the anomalous retinal vasculature relationship is the proposed mechanism of the central retinal vein occlusion. Careful attention to the retinal vascular anatomy is suggested to aid in assessing the risk of retinal vein occlusion in any age group.

Aspirin 81 mg was started as prophylaxis, and the case did not require intravitreal anti-vascular endothelial growth factor therapy.1 At 1 week and 1 month follow-up, BCVA was 20/40 in the left eye. By 2 months, BCVA returned to 20/20-2. Residual venous tortuosity was present. Upon closer review of the nerve anatomy, the arteries were found to lie directly over the veins with the vessels tightly intertwined in the left eye (Figure 3). More specifically, an undilated nasal retinal vein was firmly wrapped around the arterial bifurcation. Since the veins that emanated from directly underneath the site of the intertwined vessels were dilated and tortuous, this anatomical relationship was postulated to be the cause of his otherwise idiopathic CRVO. No such vascular intertwining was present in the unaffected right eye (Figure 4).

CRVO typically occurs in patients older than 50 years with risk factors including hypertension, diabetes, and open angle glaucoma.2 CRVO in a young patient merits work-up for underlying compressive, hematologic, or autoimmune etiology.3–5 Primary pulmonary hypertension has also been reported as the hemodynamic basis of CRVO in three patients in whom significant morbidity and mortality followed the vein occlusion.6 CRVO has been reported to occur in two young patients with anomalous retinal anatomy at the level of the optic nerve, with proposed mechanism for vein occlusion to include a combination of turbulent flow, increased intravascular volume, and pressure from the arteriolar side of the circulation causing a mechanical mass effect on the venous side.7 These changes, over time, are thought to damage the vessel wall of the central retinal vein and lead to thrombosis and occlusion. These cases highlight the importance of careful inspection of the retinal vascular anatomy to aid in assessing the risk of retinal vein occlusion in any age group. Thorough work-up and co-management with the patient’s primary care physician is recommended.

This work is supported in part by an unrestricted departmental grant from Research to Prevent Blindness (RPB), Inc.