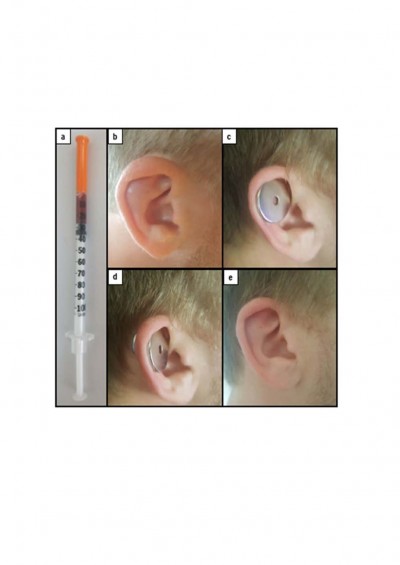 Abstract: Acute auricular hematoma can be caused by direct blunt trauma or other injury to the external ear. It is typically seen in those who practice full contact sports such as boxing, wrestling, and rugby. “Cauliflower ear” deformity, fibrocartilage formation during scarring, is a common complication of auricular hematomas. Therefore, acute drainage of the hematoma and postprocedural techniques for preventing recurrence are necessary for preventing the deformity. There are many techniques although no superior method of treatment has been found. In this case report, we describe a novel method using needle aspiration followed by the application of a magnet and an adapted disc to the affected area of the auricular. This minimally invasive, simple, and accessible method could potentially facilitate the treatment of cauliflower ear among full contact sports athletes.

Auricular hematomas are a commonly seen complication from blunt trauma to the auricle, usually seen in those who practice full contact sports such as boxing and wrestling.1 Those who do not use wear protective headgear are at greater risk.2 Auricular hematomas form within the space between perichondrium and cartilage on the anterior of the ear.1 They develop due to the unique histological characteristics of the damaged auricle together with the peculiar pathology of the injury.3

The unique structure of the external ear is susceptible to traumatic injury.4 During the scarring process, the subperichondrial hematoma is invaded by chondrocytes and fibroblasts from the perichondrium, and a fibrocartilage is formed.1,5 As the blood supplied to the cartilage is dependent on the perichondrium, complications such as infections and cartilaginous necrosis may ensue.1 If left untreated, an ear deformity coined “cauliflower ear” may develop as a result of stimulation of the mesenchymal cells in the perichondrium and formation of new fibrocartilage.1

Numerous options to treat auricular hematomas have been reported, and effective management remains a contentious issue.3,6 Surgical correction remains the mainstay of treatment for “cauliflower ear”3,7 with the need to take time off from training. The most common treatment method for an auricular hematoma is drainage followed by techniques to prevent recurrence.8,9 Common drainage techniques are scalpel incisions, aspiration, and then the placement of materials to remove the dead space. There is a large variety of postprocedural techniques for preventing recurrence. Materials reported in the literature have included tie-over and tie through dressings, suturing, silicone splinting, cotton and plaster bolsters, passive and suction drainage, and clips.6 More recently, the use of mattress sutures,10 suturing pairs of Leonard buttons,11 and silastic sheets3 has also been reported in the treatment of auricular hematomas. Although these methods facilitate the removal of the dead space, the application of evenly distributed pressure across the hematoma remains problematic.3 Furthermore, techniques that use cotton bolsters for the application of pressure can contribute to postoperative infections due to the wound exudate that requires frequent dressings.3

An 18-year-old competitive ju-jitsu wrestler presented with a chief complaint of pain and swelling in his right auricle. On observation, the formation of an acute auricular hematoma was noted. After cleaning the area with chlorhexidine, needle aspiration using a 30G insulin syringe was performed (Figure 1A and B). A magnet and a metal disc were applied on both sides of the auricle and left in situ for 3 days to compress the skin, perichondrium, and cartilage (Figure 1C and D). The use of the metal disc (as opposed to the use of two magnets) was to limit the amount of pressure exerted on the area to prevent undue pain, trauma, and additional injury. The pressure is adjusted according to the pain and can be altered by adding a layer of thin cotton or fabric. In our patient, we used a strong magnet on the posterior aspect of the ear and a disc that suited the ear size and shape covered with a layer of cotton which did not require the application of medical tape to secure. As the magnet is rigid and provides a homogeneous pressure, it must be noted that most of the collection is located in a relative flat area between the helix and antihelix where the sheering forces can create the virtual space to collect the blood or serum seen in these cases.

In the event, a recollection was observed, the same process was repeated, and the hematoma was drained up to three times over 3 days. No hematoma was observed after 1 month, and the crus in the antihelix is clearly seen (Figure 1E). The same athlete has sought minimally invasive treatment over the past 2 years after recurring injuries, and this procedure has been repeated six times. The patient provided written informed consent for the described procedures and the use of digital photography for the purposes of treatment, teaching, and use in academic publications.

In this case report, we describe a cost-effective, minimally invasive treatment method, using needle aspiration and postdrainage pressure (magnet and disc) on the hematoma site, similar to the technique used for the prevention of excessive scar formation.12 The most common etiology for auricular hematoma is blunt trauma to the external ear.9,13 The skin on the anterior aspect of the auricle is attached to the perichondrium and cartilage with the majority of hematomas are noted to form on the anterior surface of the auricle.3 Therefore, effective treatment must be focused on evenly distributed pressure of the anterior surface of the auricle. The collection is usually small due to the structure of the ear and the adherence of the skin to the cartilage beneath. Only a strong force during the training of martial arts can cause sheering of the different layers and create a collection.

Recently, Vijendren et al9 conducted a multicenter retrospective observational study in the United Kingdom, assessing the outcomes of various management strategies of auricular hematoma and effects. They found that the management, attending practitioner, use of antibiotic coverage, and hospital admission had no impact on the rate of auricular hematoma occurrence, infection rates, and cosmesis. The only factor influencing the reoccurrence of the hematoma was the location of the drainage and the affected part of the ear.9 Some studies suggest that there is no superior method for the treatment of auricular hematomas.6,9

There is no doubt that in this case we had a good esthetic outcome that resulted in a minimal loss of training for the athlete reported in this case. Furthermore, we have performed this technique on three other athletes as described in this case report, and this minimally invasive technique has less chance of infection as no cotton bolster is used.

This case report presents a simple, minimally invasive, and cost-effective treatment for auricular hematomas. The main advantage of this technique is the capacity to distribute pressure evenly with the use of magnets to eliminate the dead space on the anterior surface of the auricular. The use of magnets enables easy monitoring of the wound site with no remarkable complications reported. However, it should be noted that only one case cannot prove the efficacy of a method, and further work is required to define a sound noninvasive procedure including drainage.